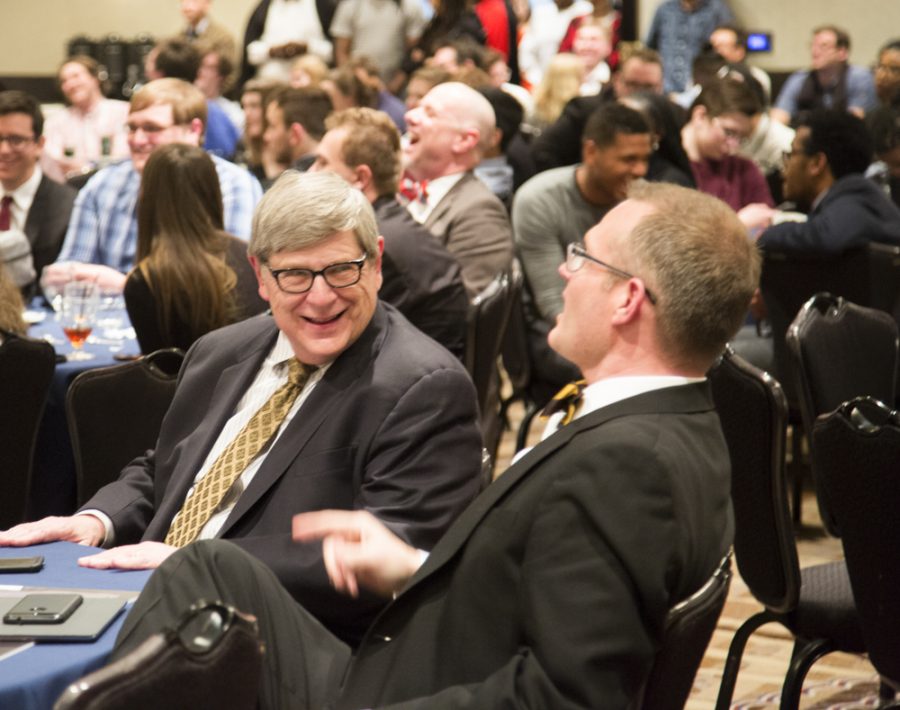 Lee Thompson (left), one of the debaters that won the National Debate Tournament for WSU 50 years ago, laughs with Jeff Jarman during the NDT award ceremony at the Marriott.

Wichita State hosted the National Debate Tournament for the first time this weekend, aligning with the 50-year anniversary of Shocker Debate’s victory at the tournament.

The tournament was held at the University of Chicago in 1967, where Shocker debaters Robert Shields and Lee Thompson made it into the elimination round.

The next year, Shields and Thompson won the nationwide tournament held at the Brooklyn College in New York.

In their victory tournament, Shields and Thompson defeated schools such as Michigan State and Butler University.

Shields served as the WSU student body president during this time, and Thompson, a political science major, served on his cabinet as treasurer.

Director of the Elliott School of Communication Jeff Jarman has been a director for WSU’s debate team for 22 years.

“When I came in ‘96, we were not actively attempting to qualify to this tournament,” Jarman said. “We’ve become increasingly competitive among the national caliber programs that do this.”

WSU qualified for the tournament by winning enough district-wide competitions against regional schools in Kansas, Missouri, Oklahoma, and Texas.

“To me, (debate) is the single hardest thing we ask an undergraduate student to do,” Jarman said. “The amount of time it takes to research and the depth of research and preparation that’s required has often been compared to writing a master’s thesis.”

Jarman described the National Debate Tournament as “unique” because it is a competition without divisions.

“This tournament has elite private schools. Harvard is here. They were the top-seed at the tournament,” he said.  “Schools in our state like Wichita State and Emporia State are at this tournament as well.”

In the first round of the tournament, 78 two-person teams compete against one another. Each team must compete eight times, and the teams with at least five wins advance to the single-match elimination bracket.

In competing with teams like Wake Forest of North Carolina and Dartmouth of New Hampshire, WSU’s debate team garnered only four wins, and did not move on to the elimination bracket.

“Our goal every year is the same,” Jarman said. “Take any student who wants to be on the team, … train them, and help them get better.”

Seniors Daniel Saunders and Jamie Welch represented WSU at this year’s National Debate Tournament for the fourth year in a row. As one of the debate team’s biggest events of the year, Welch and Saunders refer to it as “The big dance.”

Saunders and Welch explained the process by which they have researched topics over the years.

“There’s a resolution which suggests the likely things we’re going to debate about, and then we have to systematically figure out all the details of that resolution,” Saunders said.

Saunders and Welch said that researching this year’s topic — health insurance — forced them to learn the nuances of such a “timely” issue, and that it better prepared them to discuss healthcare.

As Saunders and Welch prepare to graduate, this is their final year competing for WSU’s debate team.

Welch said that she hopes future generations of WSU debaters will maintain the reputation they have developed.

“We try to get to know our opponents and actually form the relationships, and I just hope they uphold the hard work and talent that comes from the Wichita area,” she said.

“One of the things that’s nice about Wichita State debate is that we have a consistent history of being able to get teams prepared and sufficiently capable to hang in these debates, and even beat people who have come from very powerful backgrounds,” Saunders said.

Welch said that all students who are interested in debate should try to be involved with WSU team.

“You don’t have to have a debate background to be a member of the debate team,” she said.

“One thing that’s great about debate is that it’s competitive. It’s like playing a game,” Saunders said. “But it’s a game that the process of playing it makes you a lot more informed about all sorts of different issues.”