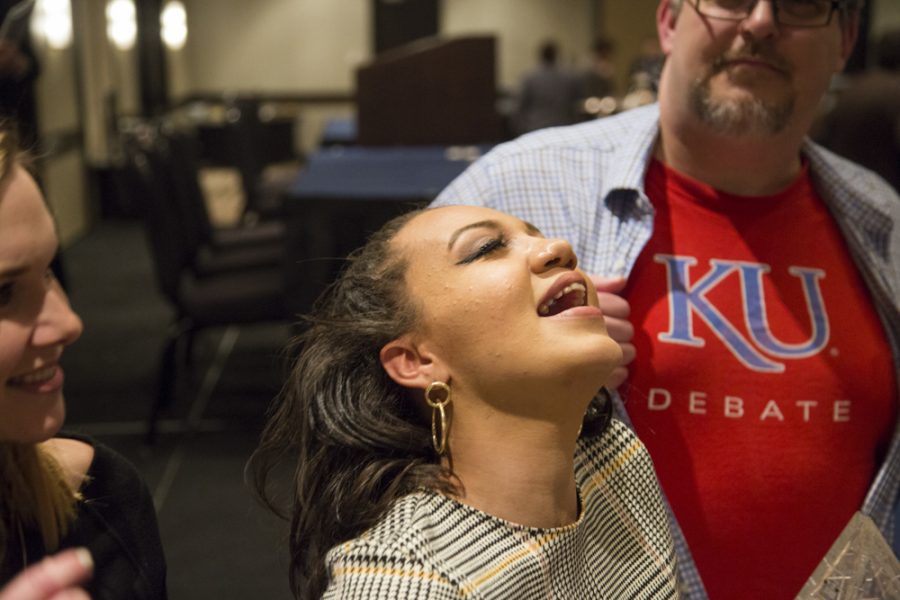 The University of Kansas debate duo of Quaram Robinson and Will Katz won the National Debate Tournament, which was hosted at Wichita State over the weekend. The tournament fielded 78 of the top debate teams from across the country — including WSU’s Daniel Saunders and Jamie Welch.

Robinson and Katz defeated Georgetown’s David Bernstein and Natalie Knez in the finals Monday evening, by a judge’s score of 4-3. The duo, who came into the tournament as the No. 5 team in the nation, defeated No. 4 University of Nevada Las Vegas in the quarterfinals and top-ranked Harvard in the semifinals to advance to the final round.

This was Robinson’s fourth straight appearance in the elimination rounds of the national tournament, each year with a different partner, an accomplishment Katz said is “almost unheard of.” She finished as a runner-up in 2016.

It was Katz’s first time competing in the national tournament.

“It’s really incredible,” Katz said. “(Robinson) is one of the best debaters of all time. I think she’s obviously proven herself.”

Robinson finished as the fourth highest-rated speaker out of 156 in the tournament. Katz finished 24th.

Katz, who is from Topeka, said he was glad the tournament was in Wichita because his parents were able to watch him debate.

“The travel normally takes more time out of your busy schedule,” Katz said. “Being in Wichita is awesome. . . A lot of my friends are here.”

“It was really a great experience,” Katz said. “A lot of high-level competition that you don’t see in every debate at every debate tournament.

Saunders and Welch, both seniors at WSU, finished with a record of 4-4 in the preliminary rounds, one win shy of advancing to the elimination rounds.

The Shocker duo, who was ranked No. 48, split their opening two rounds, sweeping James Madison and losing to University of Southern California, before beating Wake Forest in round three. They then lost three straight to Emory, Michigan, and Dartmouth in rounds four, five, and six. The duo finished the tournament with wins over Wyoming and UC Berkeley.

Saunders and Welch finished as the 88th and 85th highest-rated speakers, respectively.

WSU was one of three Kansas schools in the national tournament, along with KU and Emporia State.