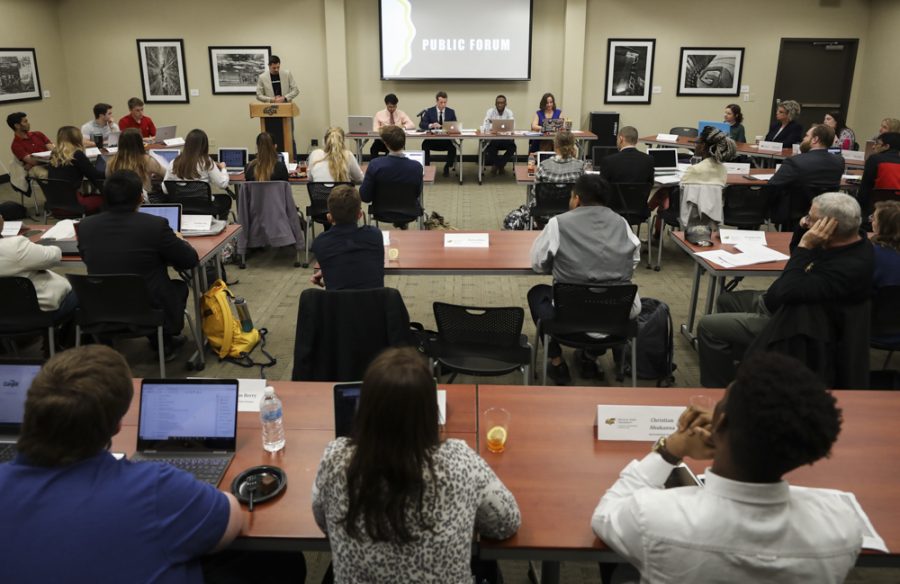 The student senate cannot change the budget for fixed-line items, such as The Sunflower. It can only vote to approve or reject the student fees budget as a whole, and can adjust funding levels for non-fixed-line items. The senate voted to give The Sunflower half of the $158,000 it requested.

“The very first time I read these line items I asked myself, why is The Sunflower being picked on?” Senator Kathy Bond said. “As a communications major, I think it’s very important that we fund The Sunflower.”

Because of this, Bond said she would vote against the student fees budget.

The budget was approved by the Student Fees Committee, a group of SGA cabinet members, two student senators, and two university vice presidents. After its first recommendation, which cut The Sunflower to $55,000 out of its $158,000 request, was assembled during a meeting the committee barred reporters from entering and raised “First Amendment questions,” Wichita State President John Bardo called for the committee to re-do its deliberations in public. A week later, the committee increased The Sunflower’s funding to $80,000 — still a significant cut.

Sen. Matt Miller said, in his argument against the budget, that this was an opportunity for student government to repair relationships with The Sunflower.

“As many of us know, currently the relations between SGA and The Sunflower are not really the best,” Miller said during debate.

“We hold an opportunity to extend an olive branch to them and I think we should take advantage of that,” Miller said, encouraging the senate to vote against the budget.

Student Government’s Faculty Adviser Nancy Loosle reminded student senators that time is limited to consider changes to the student fees budget, and that a decision had to be made soon.

If the student senate had turned down the budget proposal Wednesday, it would have been sent back to the Student Fees Committee for reconsideration before being brought back to the senate for a first and second read and again put up for a vote by the senate — a process that would take weeks.

“All departmental budgets have to be submitted by the end of April. This is a state timeline that we have to adhere to,” Loosle said. “I just want you guys to understand that there are things beyond you that we need to make sure we’re considering.”

Sen. Greg Bucchin, who also voted against the budget, questioned the discretionary funding of $200,000 that the student affairs department received as a fixed-line item.

“Yes, you’ve gone through what’s in that $200,000. But the real question is, did each of those requests come through the financing committee?” Bucchin said.

Vice President for Student Affairs Teri Hall snapped back to the Senate as its members asked about her discretionary fund and other items within her department’s budget, which increased by more than $100,000 this year. Hall has repeatedly said the increases in her budget include increases to state-mandated fringe benefits for employees in her division and that her discretionary fund helps her achieve her mission to “connect every student.”

Hall’s division is a fixed-line item, like The Sunflower, and the student senate was not allowed to change the allocated amount. She said a cut to her department would change staffing levels, and it might even threaten students’ lives.

“The severity of the issues that we deal with, especially with this case manager position, was critical. These are students who are threatening suicide.”

As the Student Senate moved through each line item, some senators stopped voting. Hungate reminded senators to make their votes.

This senate was represented largely by Hungate’s ticket, United We Stand. In last year’s election, of the 38 elected senators, 32 were were members of United We Stand. Most of those didn’t last, but open positions have been appointed by Hungate and her administration.

Many senators spoke out against the funding bill, insisting the cut to The Sunflower was a step in the wrong direction.

“The goal of our organization is excellence, not ease,” Sen. Matthew Miller said. “We cannot pass this and turn our eyes to it. We have organizations’ fates in our hands. In regards to The Sunflower, we could use this to improve the relationship between the two organizations.”

Other senators chose to defer to the Student Fees Committee’s recommendation.

“SGA as a whole, we have to think about our efficiency and not our image,” Sen. Taylor Williams said.

“They (the Student Fees Committee) have deliberated twice, they’ve weighed out all the outcomes and put the best recommendation on the table,” Williams said.

The Student Fees Committee was firm in its decision to cut The Sunflower, and Williams said he sending it back would not change the recommendation.

“I don’t know The Sunflower will get their full funding. I don’t want to spend the next four or five weeks trying to make something happen that won’t happen. If we vote it down now, we’re just going to vote it down again,” Williams said.

“We shouldn’t nickel and dime this until The Sunflower gets fully funded,” Williams said.

Four senators were absent for the vote. Mikrokosmos, Wichita State’s literary journal, had its funding levels moved to the full amount requested, after the student fees committee cut it entirely behind closed doors and then raised it at the second deliberations to 75 percent of its funding level this year. 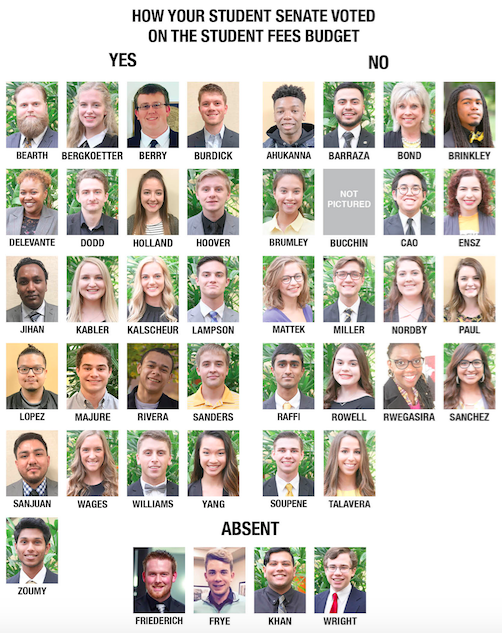 Here’s the budget the Student Senate voted 21-18 to approve: