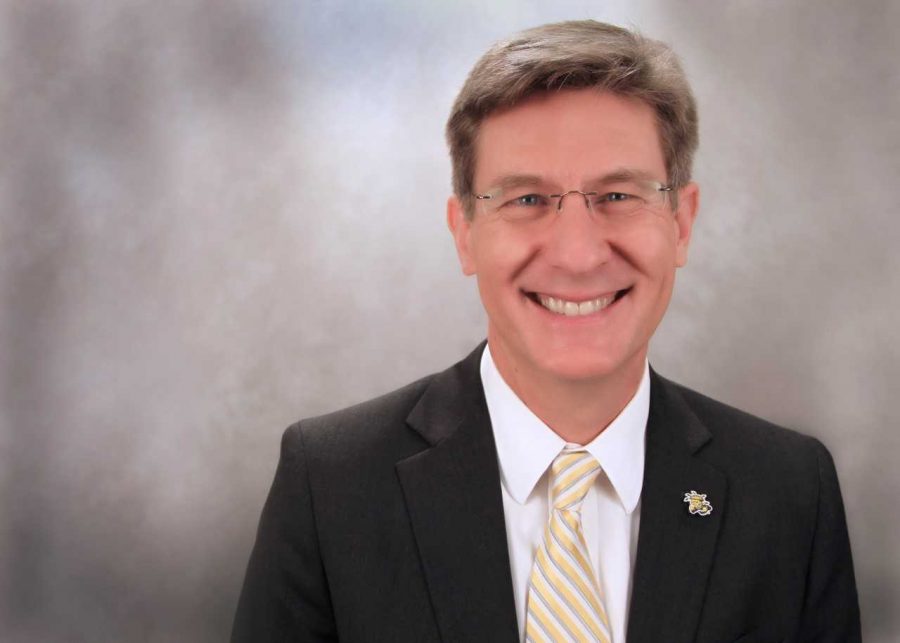 It was the early 1980s. Bowden, a sax-playing music major at the University of Southern Mississippi, was a first generation college student raised by parents who couldn’t afford college for themselves, but who set the expectation that their son would attend college.

So college was a strange concept for the young jazz musician and his parents.

“There were things others knew about and how to navigate that I didn’t,” Bowden, 57, said in a southern drawl, developed from years lived in Alabama, Mississippi, Louisiana, and Texas.

But people made the difference for Bowden, he said. He quickly learned the impact a conversation could have.

Bowden had an interest in flying as a young man. That led to a fateful conversation with an Air Force recruiter.

“He looked at me and said, ‘Son, if you’re going to fly planes for the Air Force, you need to major in something more technical.’

“And I thought, ‘Engineering type stuff is technical.’ So that’s the direction I went off into.”

Bowden changed his major to engineering. Soon after, a faculty member changed his career path completely.

Bowden figured he’d finish his undergraduate degree and go back to work at Texas Instruments in Dallas, his entry-level job into the engineering industry. He had no thoughts of a career as a faculty member or university administrator. That soon changed.

“(A faculty member) called me and said, ‘Royce, it’s time for you to go to graduate school. Here’s where you need to go, and they’ll offer you an assistantship (at Mississippi State). It’s all taken care of — all you have to do is go.’

From there after, it became about helping others like that faculty member had helped him, and “giving them pathways to achieve their dreams,” Bowden said. There was no better career than as a professor at a university to accomplish that, he said.

He never joined the Air Force, but Bowden got his pilot’s license. He spent the next 30 years working in higher education, with the last five years as a dean acting as a culmination of that work.

He’s spearheaded things like a senior-to-freshman mentoring program to strengthen retention, and his associate dean Jan Twomey said Bowden has worked towards stronger gender equity in the department — starting with hiring her about three years ago as associate dean for graduate studies, research, and faculty success.

“Before Royce, we never had this position, and I give him credit — he hired a woman in engineering,” Twomey said.

Since Bowden’s arrival, the engineering school has put two female faculty in every department except for bioengineering, Twomey said.

“The fact that he placed a female in this (associate dean) position says these things are important. He understands to lead by example,” Twomey said.

Around the dean’s office and around campus, he’s “friendly,” “respectful,” and brings a “positive climate” wherever he goes.

He could be quoting Albert Einstein — “He loves the quote, ‘Engineers create that which did not exist,’” Kim Bair, the WSU Foundation senior director of development for the college of engineering, said — or he could be talking about his airstream camping trailer and backpacking with his wife, CeCe, through the mountains.

He could be inviting students into the dean’s office for a cup of coffee, a daily invitation to interact with the dean that doesn’t happen in every department. Associate Dean Steven Skinner said that friendliness and willingness to get along with everybody defines Bowden’s personality.

“It doesn’t matter who you are, or what rank you have — he really treats everybody the same.”

His attitude as dean stems from his early collegiate interactions, the ones that set him down the path he now walks.

“He really sees his success in the success of others,” Skinner said. “That’s what he sees his job as — making sure that everybody can be successful.”

So, at 57, why retirement now? For Bowden, it came down to returning a 23-year-old favor to his wife, CeCe.

“About 23 years ago, my wife gave up her career to stay home with our two boys and basically run the household so I could work crazy hours and focus on my career,” Bowden said.

“When we moved here, she took a job with the Boy Scouts (working with volunteers). It’s been her dream job. So I’m going to do what she did for me 23 years ago, so she can focus on her career.”

Bowden will be replaced by an interim, followed by a national search to find the next dean. Interim Provost Rick Muma will lead the search. Come June, Dean Bowden will pack up his things and leave Wallace Hall one last time.

He started as a saxophonist in an unfamiliar place, with no thought of one day being a dean at Wichita State. But one faculty member showed him the impact he could make on students. Then he spent the next 30 years striving for that same kind of student success, all because one faculty member had went out of their way so that one less college student had to wing their way to a degree and career.

“A lot of times it’s just a word — a word to a single individual. That’s the power of this profession.”