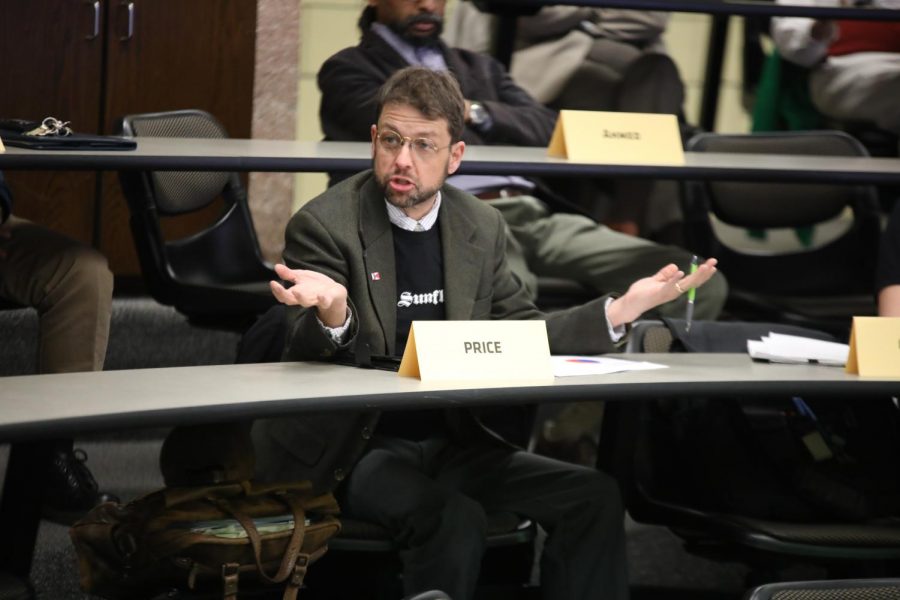 Jay Price speaks at a Faculty Senate meeting in March. Price, a humanities senator, said "there seems to be no recourse to say no" to decisions made by a nonprofit organization managing Innovation Campus

Questions ranged from where the money comes from to operate the nonprofit to why there has been no student or faculty input on decisions about the campus expansion project that, according to the latest master plan, will bring 27 new buildings on the east side of Wichita State’s campus.

Boden, who is not a member of the Innovation Alliance board and does not have a voting role in decisions about Innovation Campus, provided a few new pieces of information.

Boden said the university was advised by legal attorneys and accountants to establish a for-profit entity so “if we had any for-profit ventures or business, we could run it through that.

“There are some things that as a university, as a state agency, and then IA (Innovation Alliance) as a nonprofit agency, we are restricted under tax code from doing.”

Boden said the for-profit entity will be “serving as the investment arm of any spin-off intellectual property businesses that come out of the university.”

“Such as, for example, if a faculty member were to invent something here at the campus and a patent was created and a faculty member wanted to do a spin-off business, we have various entities through the university to help facilitate, promote, trade that, including filing for the patents, at which stage there might be a faculty start-up interest.

“We might, in exchange for helping them get to that point, take an equity interest in that start-up company, and that would be held by IC, because that’s a for-profit function,” Boden said.

Smith-Campbell followed-up by asking if the board for the for-profit corporation was the same as the board for the nonprofit, because it’s not listed on the university’s website. Boden said she could see if it was on the Innovation Alliance website and if not the two of them “can have a conversation.”

“I will tell you it’s only one board member of IC (Innovation Alliance Investments Corporation), though, and that’s Dr. Bardo,” Boden said.

Boden then answered a question about a different subject, but several senators were visibly surprised at her answer to that question.

Aaron Rife, an education senator, brought the questioning back to that topic.

“Can we go back a question?” Rife said. “Did you just say that President Bardo is the only board member of the innovation corporation?”

Aleks Sternfeld-Dunn, a fine arts senator, asked if Wichita State is putting any of its own resources “towards any aspect of Innovation Alliance.”

“To be honest,” Boden said, “you’re asking me to state an absolute that I wouldn’t be comfortable with.”

As an example of how that question is hard to answer, Boden pointed to the Law Enforcement Training Center, which exists as a partnership building between the City of Wichita, Sedgwick County, and Wichita State on Innovation Campus.

Boden then gave a seemingly contradictory answer to a follow-up question from Sternfeld-Dunn.

“So once they (the developers) build the building, we have to lease it from them to use it?” he asked.

“No, absolutely not,” Boden said.

However, that doesn’t align with what The Sunflower has reported. For example, Wichita State expects to pay more $2.5 million next year to lease space from the developers of The Flats, a private apartment complex on Innovation Campus.

Boden also addressed the bidding process for Innovation Campus projects, which has been referred to as a “work-around” by a state lawmaker and a university official.

For a typical state building project, the state agency puts out plans for a building and contractors competitively bid on the project. Those submissions are open records available to the public. Bidding for Innovation Campus projects has been described as “open bidding.” But unlike most projects on state property, proposals are submitted by the developers directly to the Innovation Alliance, which decides what projects will be built on public land.

The plans for buildings submitted and decided upon by the nonprofit, especially those it turns down, are unavailable to the public.

“A lot of what we do on the Innovation Campus is with private buildings, private money, and so those projects are not bid by us. Those projects may be bid by the developers or the private individuals who are supporting those,” Boden said.

Boden was asked whether other universities with innovation-type campuses “bypass faculty and student and community input.”

“Frankly, I have no idea what they (other universities) do,” Boden said. “There’s about 107ish of them out there in the country right now. … I am confident that there are varying levels of outside input in terms of just processes.”

“Again, without stepping out of my comfort zone as far as what I’m privy to, for example once we get utility lights up, there’ll be some utility costs that go on at the Innovation Campus. There’ll be things of that nature.

“Snow removal, for example. We turn around and we charge those costs back to the tenants who will be occupying on campus,” Boden said.

Boden said it was complicated because the nonprofit could contract with the university physical plant or “have somebody come from external and plow all the roads.”

Boden said none of the board members are compensated for their work. “They’re all voluteers,” she said.

Boden said much of the money used to operate Innovation Alliance comes from a $2 million appropriation from the state.

When pressed on what Innovation Alliance spends each year, Boden could not give an answer.

“I don’t review those numbers, so I don’t know,” Boden said.

Earlier this month, The Sunflower requested “all documents recording incoming or outgoing financial transactions by the Wichita State Innovation Alliance” in the past year. Wichita State would not provide those records without receiving a down payment of $750 with an estimated total cost of $1,500.

“You have some real problems with the IC (Investments Corporation) of a board of one,” said Jay Price, a humanities senator. “I mean, I think that’s a real issue.”

“What if the university doesn’t like what’s going on?” Price said. “There seems to be no recourse to say no. That seems to be a problem.”