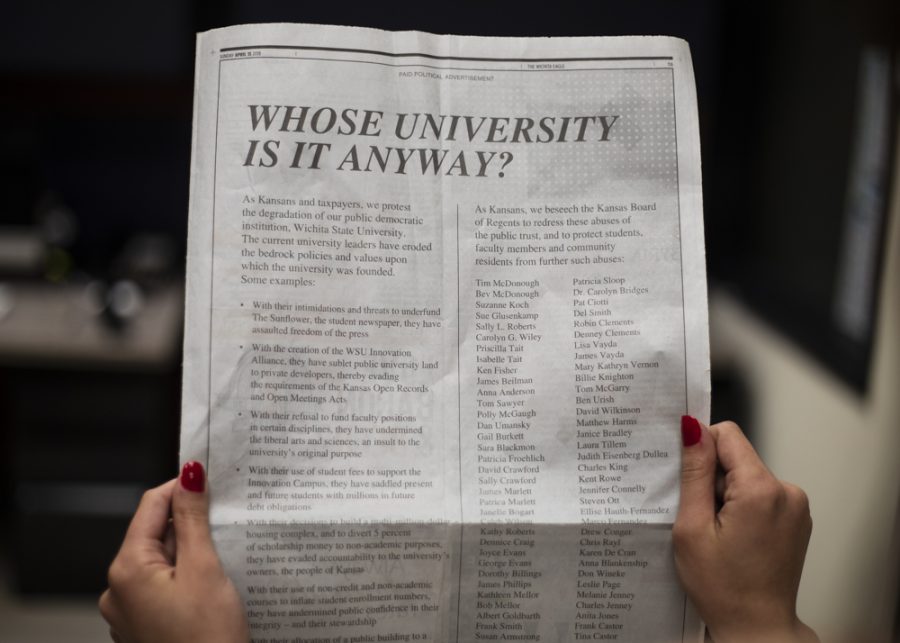 The full-page ad that ran in the Wichita Eagle was paid for by contribution by 120 people.

A group called Friends of the University, which includes former and current Wichita State faculty, paid for a full-page protest ad in the Sunday Wichita Eagle asking the Kansas Board of Regents to redress a number of recent actions by WSU leaders.

The ad, titled “WHOSE UNIVERSITY IS IT ANYWAY?” outlines seven examples of WSU leader actions that have “eroded the bedrock policies and values upon which the university was founded,” the ad said.

“As Kansans and taxpayers, we protest the degradation of our public democratic institution, Wichita State University,” the ad begins.

The group that paid for the ad, called Friends of the University, says WSU’s leaders have “assaulted the free press,” “sublet public university land to private developers, thereby evading the requirements of the Kansas Open Records and Open Meetings Acts,” “undermined the liberal arts and sciences, an insult to the university’s original purpose,” “saddled present and future students with millions in future debt obligations,” “evaded accountability to the university’s owners, the people of Kansas,” “undermined public confidence in their integrity — and their stewardship,” and “flouted the principle that public resources be used to the public’s benefit.”

Grievances included intimidations and threats to The Sunflower’s funding, the creation of the nonprofit Innovation Alliance to manage projects on Innovation Campus, underfunding faculty positions in certain disciplines, use of student fees on Innovation Campus development, building a multi-million-dollar housing complex and diverting 5 percent of scholarship money to non-academic purposes, inflating enrollment numbers, and leasing a university building to a private school.

“As Kansans, we beseech the Kansas Board of Regents to redress these abuses of the public trust, and to protect students, faculty members and community residents from further such abuses,” the ad said.

Joe Kleinsasser, a spokesperson for WSU, responded to an email request for comment from the university by providing a link to the Kansas Board of Regents Foresight 2020 strategic goals and said the university’s actions are aligned with those goals.

“Change is both uncomfortable and inevitable,” Kleinsasser said. “We respect those who love the university and may disagree with some of the decisions being made.

“We believe WSU’s focus on applied learning, economic development and education at every stage of life is fully aligned with the Kansas Board of Regents Foresight 2020 strategic goals,” Kleinsasser said.

The advertisement listed 75 names and said “in addition to these names, forty-five participants wish to remain anonymous.”

A full page ad in the Sunday Wichita Eagle costs more than $3,000.

Anne Woods, who is listed as the Treasurer of Friends of the University, was not available for comment at press time Wednesday.