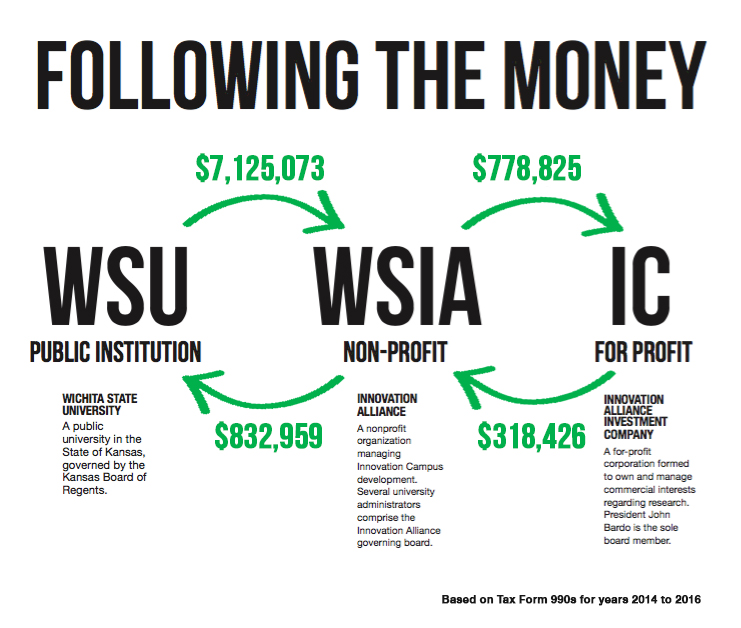 From 2014 to 2016, in the midst of a state-funding crisis for Kansas universities, tax documents show Wichita State gave more than $7.1 million to the nonprofit organization managing Innovation Campus.

During that three-year period, state funding to WSU decreased by 7.4 percent. To try to make up for those cuts, WSU raised tuition and fees by 14 percent.

By the end of the 2016 school year, Wichita State President John Bardo froze new hires and spending above $5,000, which would from-then-on need his executive team’s approval. Department budgets shrank, tenure lines were snipped, cost-of-living salary increases for faculty were postponed, and positions were eliminated. In 2016 alone, WSU lost 46 full-time positions through attrition — positions left unfilled once an employee retired, resigned, was fired, or died.

Part of Innovation Alliance’s purpose, according to minutes from its first board meeting, is to distribute profits and cash flow from Innovation Campus back to WSU.

For the $7.1 million WSU gave Innovation Alliance in its first three years of operation, it got back $832,959, according to IRS Form 990s filed by the nonprofit. That’s a $6.3 million difference.

Comparable tax information documents for 2017 and 2018 are not yet available and The Sunflower declined to pay an estimated $1,500 WSU is charging for financial transaction records for the past year.

Innovation Alliance’s Form 990s, which are required to be filed with the IRS and made available to the public on-request for certain nonprofits, provide a broad sketch of financial transactions involving Innovation Alliance, which leases land from WSU and subleases it to private businesses on Innovation Campus. Filings for 2017 and 2018 are not available at this time.

President John Bardo, who hand selects the board members for Innovation Alliance, has continually defended the university’s development model.

“The truth is,” Bardo wrote in his latest newsletter, “that WSU has followed and will continue to follow state law and KBOR policy for every project on the Innovation Campus today and in the future.”

“We understand and expect to be subject to public scrutiny,” Bardo said in the letter. “As we work, with your help, to sustain the university into the future, we will continue to achieve progress with transparency.”

President Bardo is the chief officer of the university, nonprofit organization, and for-profit corporation.

Innovation Alliance leases ground from the university and then leases that ground to private developers on Innovation Campus, a campus expansion project doubling the size of campus by building on what used to the university golf course directly east of campus. The nonprofit also recently leased a university building to a Koch family-funded private elementary school.

Many projects on Innovation Campus have been leased to the closely-held nonprofit Wichita State Innovation Alliance and then sub-leased to third parties without a public discussion, vote, or a competitive bidding process normally required for state-owned property.

Questions about Innovation Alliance began at a Faculty Senate meeting following an announcement, through the Wichita Eagle, that a Koch family-funded private school would be leasing a building on campus. That lease agreement had already been signed by Innovation Alliance well before the decision was announced.

Innovation Alliance President John Tomblin, who is also WSU’s vice president of research and technology transfer and the executive director of the National Institute for Aviation Research, had been in discussions with the Koch family about bringing the private school called Wonder to Wichita State since last spring. On Dec. 19, he signed a lease agreement with Wonder. On Feb. 4, the university found out about the deal through a Wichita Eagle article.

Tomblin said if the student government did not approve of it, the project would not go forward. Student government opposed the fee increase for the Y, but President Bardo said in a written statement that “These facilities (the Y) are important enough to the future of the university that I’ve asked members of our team to keep exploring the idea despite a vote last week by Student Government Association to oppose it.”

The new session, led by student body president Paige Hungate, who was one of eight senators to vote in favor of the Y in the previous session, and Breck Towner, who had worked in President Bardo’s office prior to seeking the office of vice president, quickly passed a resolution in favor of the fee increase before the school year ended.

Last summer, WSU closed its own dorms to move about 300 students into a private apartment complex on Innovation Campus after fewer than one in five beds at the expensive complex had been filled about a month before move-in day. WSU leases the land where that complex is located to Innovation Alliance, which leases it to the private company that runs apartment, which then leases the space inside the building back to WSU. Next year, WSU plans to pay more than $2.5 million to the private company, which is owned in-part by the chairman of the Kansas Board of Regents, David Murfin.

Innovation Alliance drafted a resolution as part of its justification to lease the area to Airbus that projected as many as 200 engineering students would work at Airbus. This fall, 11 WSU students were employed at Airbus, down from 14 students last spring.

President Bardo and his spokesperson, Lou Heldman, have both stricken down criticism of Innovation Campus as the public expecting too much too quickly, comparing unmet expectations on Innovation Campus to expecting NBA superstar LeBron James be in the NBA at age one and complaining that a project won’t serve underprivileged students “is a little like complaining that the newborn can’t dunk the ball.”

In President Bardo’s March newsletter titled “The truth about Innovation Campus: A crucial collaboration for WSU’s survival,” he said these types of “collaboration with industry and community partners is now crucial for public universities to thrive.”

President Bardo said universities’ motivations for developing research parks, such as Innovation Campus, include “the possibility of financial gain associated with technology transfer, the opportunity to have faculty and students interact at the applied level with research organizations, and a desire to contribute to regional economic growth.”

President Bardo said the public-private partnership model being used on Innovation Campus “minimizes WSU’s financial burden and risk while ensuring a valuable return on investment to the university because, at the end of each lease, the university acquires the improvements on the land for its own use.”

The first two projects on Innovation Campus, Partnership Building One that houses Airbus and the experiential engineering building, opened in 2017. 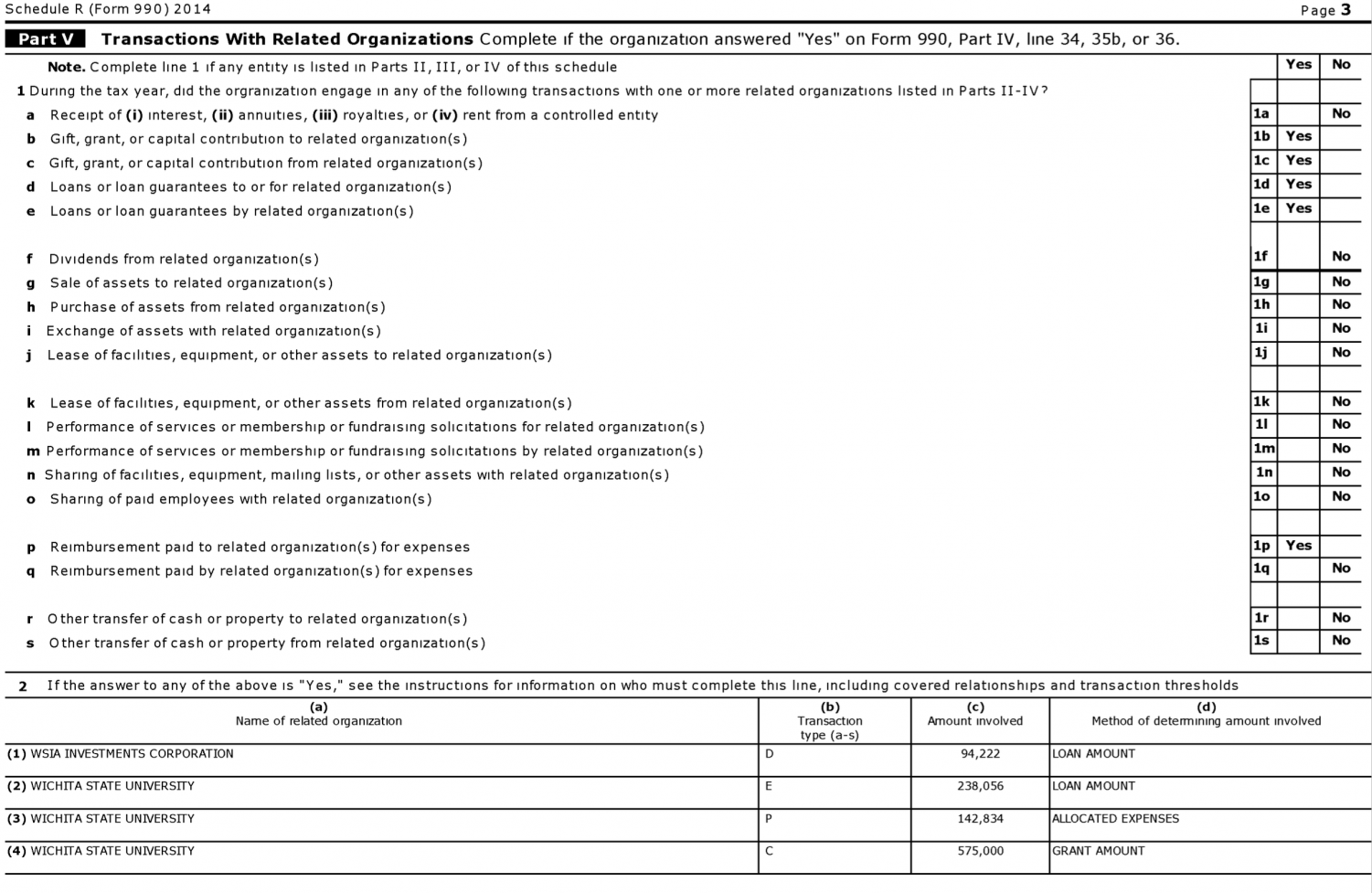 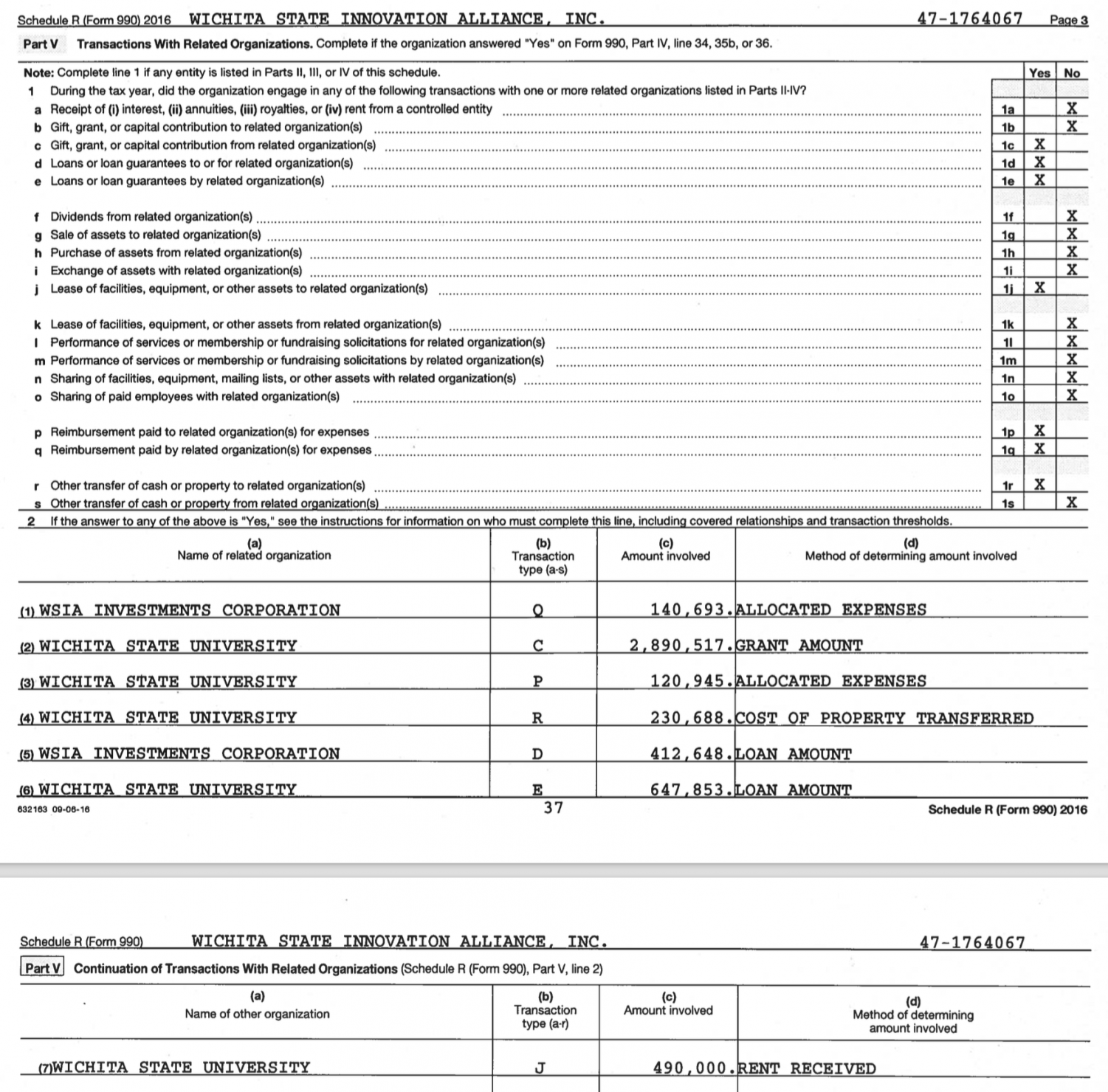