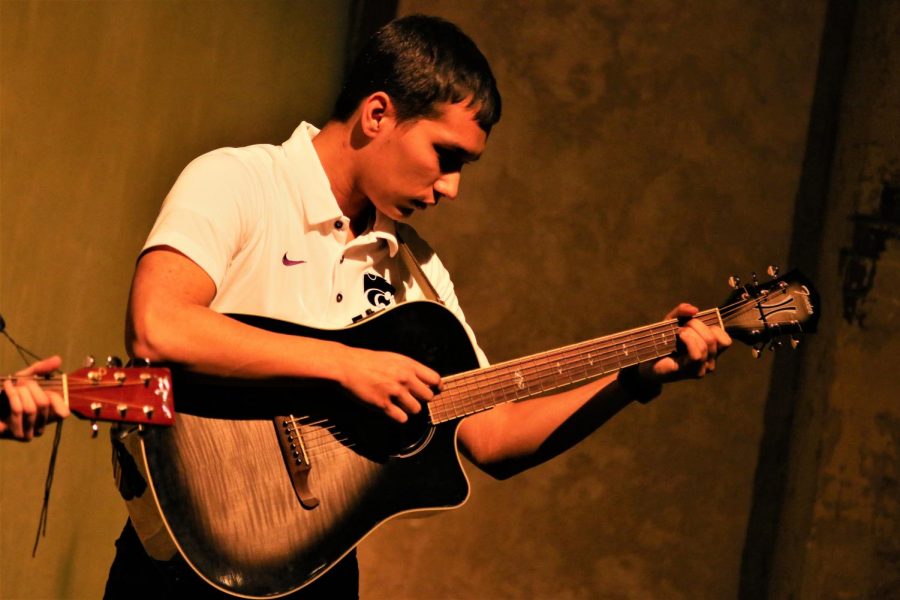 “Let me relate to you,” Paraguayan poet Manuel Ortiz Guerrero wrote in the beginning of the nineteenth century in a nation rebuilding in the wake of the “War of the Triple Alliance.” “The sorrow that oppresses me…only the music can relieve.”

Guerrero wrote these lines in Guarani, the indigenous language of Paraguay — a tongue which despite the dawn of European colonization survives to this day.

The past weekend at St. Vincent de Paul Catholic Church in Andover, the visceral nature of Guerrero’s words were celebrated in full.

Friday— The Kansas-Paraguay Partners of America(KPP) marked their 50th year as an institutional student exchange program.

The KPP is encompassed within the Partners of the Americas Program — a nonprofit cultural, academic and foreign-exchange student program established under the presidency of John F. Kennedy in 1963. To date, the KPP is responsible for the study abroad opportunities of dozens of students between Kansas and Paraguayan universities each year.

Among these individuals, many travel to and from WSU on an annual basis. Numerous former KPP alumna were in attendance Friday evening including alumni Paula Wierman who earned her bachelor’s in Spanish in 2017.

In her final semester while taking an elective Spanish course, Wierman had the opportunity to travel to Paraguay as a part of an agricultural study program in the nation’s capital of Asunción.

“It was a blast,” Wierman recounted. “One of the highlights was just being able to interact with the people of Paraguay.”

Accompanied by her son Justin — also a WSU student — while in Asunción, Wierman was placed with a home mother outside the city.

Amid the St. Vincent de Paul ballroom, was the scent of fresh baked Sopa Paraguaya bread and various Paraguayan baked goods enveloping the room. Wierman reminisced about the kindness her and her son received in Paraguay.

Aside from her studies, Wierman remembered time spent with their host-mother. By day, the two would shop, attend local pick-up soccer matches and prepare baked goods for one another. In particular, Wierman said there was an instance when her host-mother prepared a batch of unforgettably delicious Dulce de Guayaba Jam.

Wierman said none of it would have been possible without the Kansas-Paraguay Partners Program.

Paraguayan ambassador to the United States, Germán Rojas, was also in attendance at the event.

In a soft-spoken, yet markedly articulate English, Rojas addressed a full ballroom of past and present KPP alumna.

“Its gratifying,” Rojas said. “We’re celebrating 50 years and this is not only related to students but it is a brotherhood as well.”

The Scene of a Celebration of Sister States

Paraguay and the state of Kansas are a continent apart, yet the two were partnered on account of innately similar minutiae.

Both are states landlocked in the heart of their surrounding geography. Both share an economic dependence on agricultural exports. People of each locale share a penchant for a simple yet satisfying brand of cuisine and ParaguayanWSU graduate Santiago Vera said Kansas and Paraguay share a unique attachment to one culinary branch in particular: barbeque.

“Paraguay loves barbeque!,” Vera emphatically noted while dining on a mix of Paraguayan and Kansas cuisine.

Over a plate of traditional chicken and beef empanadas and savory, salty Paraguaya bread, Vera indulged in the scene of celebration as his four daughters — all dressed in Paraguay flag embroidered dresses and dancing to the time and timbre of flamenco music in the background— Vera told his story.

In 2006, Vera traveled to Kansas and enrolled at WSU as an Intensive English student and a year later earned a bachelor’s in management information systems.

However, one short stint in Kansas wouldn’t prove sufficient for Vera.

“Coming here for one year just wasn’t enough,” he said. “I was ready for a real change.”

Through the KPP exchange program, Vera was allowed to stay in Wichita and continue his education at WSU. He would go on to earn an additional bachelor’s in business administration and a master’s in computer networking.

“It changed me for the better,” he said.

Vera presided over the sentiment that traveling abroad via the KPP provided him with an experience he might otherwise not have had.

“When you travel, your ideas change and your perspective is changed for good. You expand your horizons and you become a better person.”

Amid the food, the music, the orchestral trio renditions of “Somewhere Over the Rainbow” and “Home on the Range,” the Fiftieth anniversary of the Kansas-Paraguay Partnership was a celebration of cultural exchange.

Wierman sentimentalized her experience with the KPP in noting a truly unique feel between both Paraguay and Kansas.

“In a lot of ways, the atmosphere and the friendliness of the people is similar to Kansas,” she said. “One of Paraguay’s greatest natural resources are its people.”

At the end of the evening, Ortiz Guerrero’s soliloquy from so long ago seemed aptly relevant. Through cultural exchange, the consumption of each other’s customs, languages, music and cuisine, Kansans and Paraguayans have over the past 50 years found a common fabric and a way to relate and relieve the fractures which borders and distance tend to impose.

The sorrow, of which Guerrero wrote, oppresses not the relations of these two half-century long sister states.