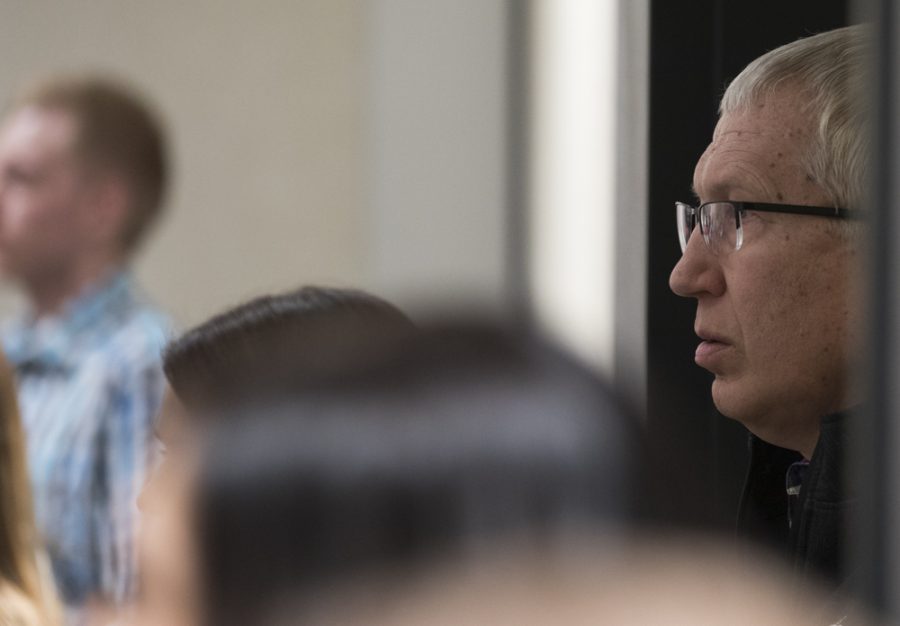 “I was instructed to call a news conference to announce the end of the football program,” he said.

He is in his thirty-second year of involvement in media relations and is the Director of News and Media Relations at WSU.

The university president at the time was Warren Armstrong. Kleinsasser, 64, has also worked under presidents Eugene Hughes, Don Beggs, and currently John Bardo.

He said one thing that has not changed much in his time at WSU is the students.

“I don’t think students have changed so much as you might think. They are still trying to find themselves,” he said.

He said students have been changed by technology.

“They are so hooked to online and social media [and] have a different way of looking at things,” Kleinsasser said. “Information is getting to people for better or worse.”

Technology has made his job different over the years.

“One big invention was the fax machine. That was better than sliced bread,” Kleinsasser said.

The days of posting information online or sending press releases for students, faculty, staff and the media came years later.

Much of his job involves working with people, but how we work together is changing with more contact being electronic with sometimes less personal interaction.

“You have to grow with it or get out,” Kleinsasser said.

Other changes at WSU came in a more physical, noticeable way.

“The physical structure of the campus has changed over the last five years. It’s just remarkable,” Kleinsasser said.

Overall, he has enjoyed his years at WSU. Before he came to the university he graduated from Tabor College in Hillsboro, where he still lives, with a degree in business communication and worked there for three years.

After that, he worked at a small radio station in Newton writing commercials and being “on air” for eight years.

He describe WSU as a “good fit.”

Lou Heldman, vice president for strategic communications, said he agrees it has been a good.

“He’s a great resource because of the deep knowledge he has developed and the personal credibility he has built with people across the campus and with local and national media outlets,” he said.

Heldman said Kleinsasser’s long-term association makes him a unique resource for everyone.

Kleinsasser said it is that connection that has kept him working at WSU for so long instead of taking another job that could have meant more money.

“I enjoy working with the media and people on campus,” he said. It’s still a challenge. It’s not boring. It still comes down to the fundamentals of working with people.”

A big part of that is being helpful, which is an important part of working anywhere, he said.

“If you do, people are more often to cut you some slack when you make a mistake,” Kleinsasser said.

Elizabeth King, WSU Foundation CEO and President, said his skills and abilities have kept in his job.

She said he is always honest and forthright when working with the media even during some difficult times.

“He has a fun sense of humor and gets along with his colleagues, the university administration, and members of the media,” she said. “His years of being a basketball referee certainly helped him fine-tune the art of mediation.”

He worked as a high school and small college basketball referee for many years where calls he made were probably agreed with and disagreed with by the fans. He retired three or four years ago for what he considered the right reasons.

“I didn’t want to be one of those they say ‘why is he still here’,” Kleinsasser said.

Lainie Mazzullo, assistant director of new and media relations, probably would not mind if Kleinsasser worked there for many years to come.

“He always listens to everyone and takes into account their opinion. He’s an expert in the field,” she said. “Anytime I need I need advice he will give a good answer and help out.”

He is choosing that same attitude and opinion he had about being a referee to his current job.

He does not think he will be at WSU for another 31 years.