The WSU Foundation helped fundraise $1.2 million to transform the 500-square-foot building into a museum. 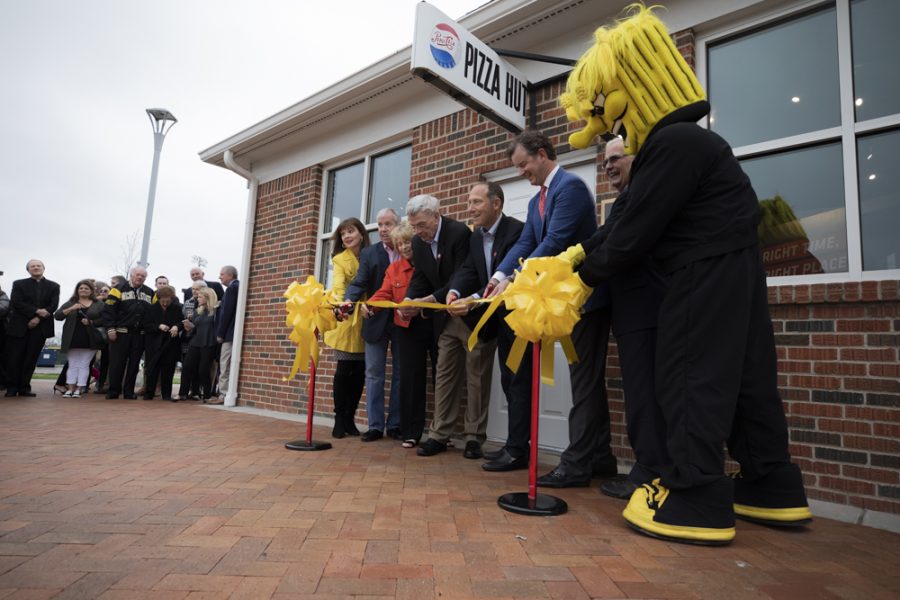 Members of Pizza Hut and WSU cut the ribbon at the opening of the Pizza Hut Museum.

Working for Carney Market and studying for a master’s degree at the University of Wichita, he was frustrated with the day-to-day and became determined to make a change.

“If you want to do something, do it for yourself,” he recalls his dad telling him.

“That’s the only way to get a true score of what you’re capable of doing,” his father said.

Carney decided it would be best to go into business for himself. Dan and his brother, Frank, borrowed $600 from their mother to open a 500-square-foot restaurant in Wichita.

The brothers decided to take a pizza recipe from their friend John Bender and roll it out to the Wichita community.

The sign on the door fit nine characters. The brothers knew they wanted to have “Pizza” in the name, leaving room for a three-letter-word. Given the building’s resemblance to a hut, Carney settled on Pizza Hut.

Pizza Hut opened its doors in 1958. Wednesday, Dan Carney, surrounded by a crowd of 300, cut the ribbon to reopen the original Pizza Hut building as a museum.

Carney stood in the kitchen-side of the museum and told stories of the company’s history. He recalled times when five people would stand shoulder-to-shoulder in the kitchen and toss pizza dough, while up to 15 diners crowded the seating area.

Through help of the WSU Foundation, $1.2 million was fundraised to help renovate the facility into the a museum filled with artifacts kept by Carney’s wife. The building was moved to Innovation Campus in September as part of the renovation project.

The building was moved from its original location at the corner of Kellogg and Bluff to WSU’s campus to serve as a symbol of entrepreneurial leadership and success. The building was dedicated Sept. 11, 1986.

Bardo said he envisions the relocation of the Pizza Hut Museum, which is located behind the Marcus Welcome Center, will challenge 17-year-olds to think in terms of entrepreneurship.

“I want them to ask themselves, ‘How big can I dream?’,” he said. “Pizza Hut tells you what’s possible.”

Pizza Hut has been in operation for 60 years. There are 17,000 Pizza Hut locations worldwide.