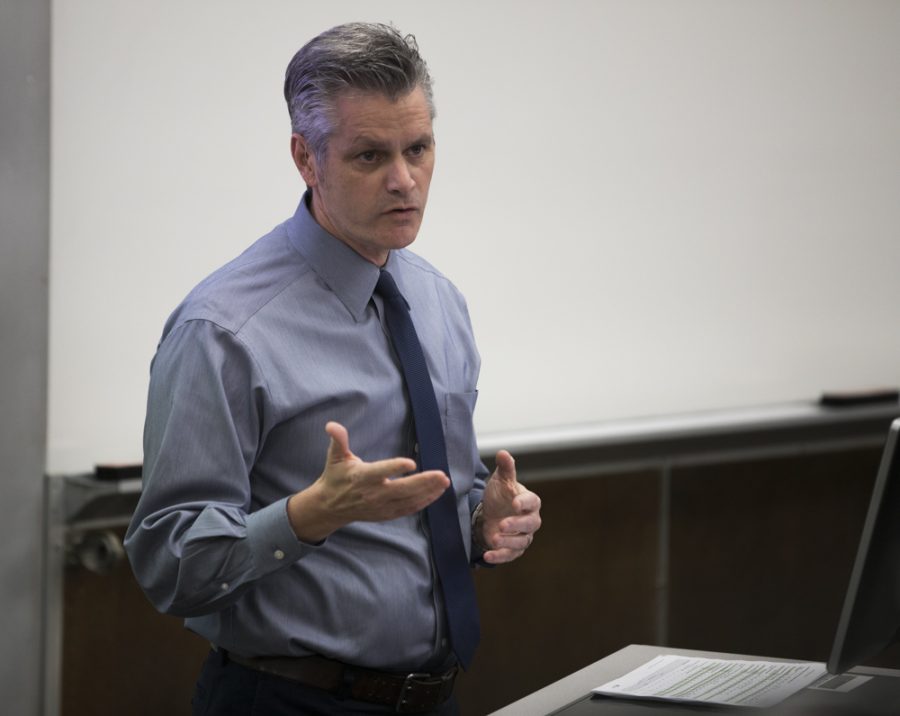 Concerns over transparency from university administration dominated Rick Muma’s open forum as a candidate for provost and chief academic officer at Wichita State.

Around 90 WSU students, faculty, and staff gathered at the open forum and directed questions to Muma Wednesday night. Attendees were given evaluation forms to share their thoughts on the candidate to the provost search committee.

The position is open since Tony Vizzini, who served as provost and senior vice president since 2014, took a paid leave from the university in January. Muma has served as interim provost since. The other two candidates for the position do not currently work at WSU.

Jeffrey Hershfield, chair of the philosophy department, asked Muma what he would accomplish in five years if he were selected for the position.

Muma also said he wants to deal with the lack of transparency from university administration and a broken sense of trust in the WSU community, especially among faculty who say they have been left out of major university decisions.

“There’s this feeling that we’re not transparent anymore,” Muma said.

Muma said transparency wasn’t a problem with him.

“I’ve been very transparent in terms of what we’re doing at the university and how we can work together,” Muma said.

Muma said he wants to “bring people to the table” and have conversations about “what it means for faculty and staff to be involved in the Innovation Campus.”

Graduate student Carolyn Fugit questioned the priorities of university leadership, including “massive” transparency issues, “and that includes from you,” Fugit said to Muma. Fugit’s concerns included conflicts of interest with Innovation Campus leaders and a private, Koch family-funded elementary school coming to campus in the fall.

“In your opinion, who comes first — administration, business, donors, or students?” Fugit said.

“I hesitate to say who’s first, second, or third,” Muma said. “Because obviously faculty and staff and students are all equal.” Muma’s answer to the question did not address business or donors.

Regarding the Koch family-funded elementary school coming to WSU’s campus, Muma said he agreed “that has been a difficult pill to swallow for the university in terms of how they found out about that.” WSU didn’t announce the plan for the elementary school. News of the school broke in the Wichita Eagle in February.

The position description for provost and chief academic officer includes: “The Provost will lead the university’s efforts to become the model for meaningful applied learning across all disciplines and professions.”

One member of the audience asked Muma how he sees the humanities and social sciences fitting in with the vision for applied learning.

Muma said it’s easier to find applied learning opportunities in some disciplines than others.

“Even though some of these disciplines are very technical in nature, they have to have some liberal arts foundation to be able to apply it critically,” Muma said.