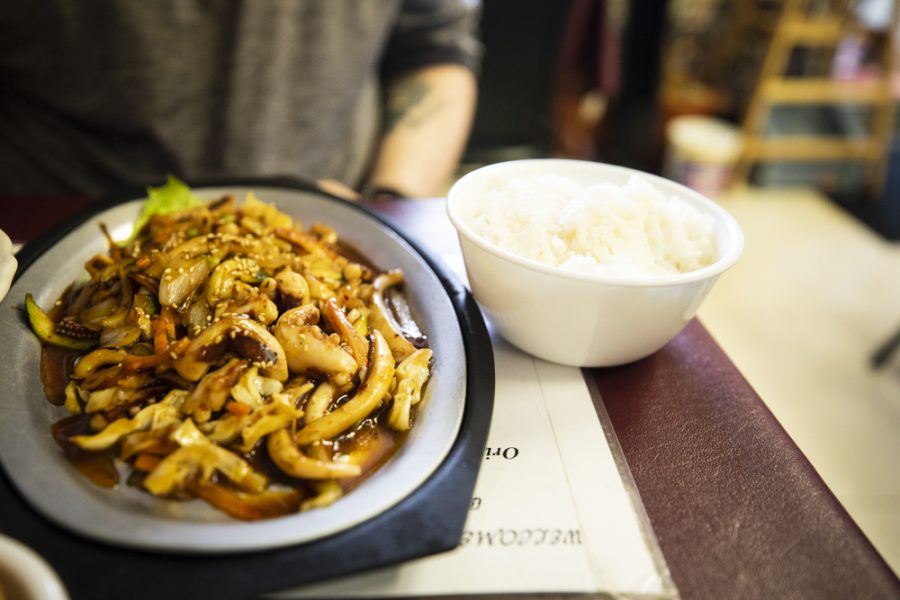 The stir squid and rice at Manna Wok.

With the sweet, pungent, garlicy smell of a barbecued squid stir-fry wafting up from a fresh, hot plate, local Korean proprietor Kye-Chon emphatically tells stories of 25 years worth of patrons at Manna Wok Oriental Restaurant in south city.

At Manna Wok, every past customer has a story, and the restaurant keeps a photographic record. Snapshots line every inch of wall space.

Throughout the years since Kye-Chon and her husband, Yong-Chon opened for business in 1993, patrons have been consistent and plenty. The KWCH Weather Team, WSU faculty past and present, Boeing engineers and out-of-towners have all been regulars.

Between bites of steamed Bakami rice chopsticked into my maw, Kye-Chon nostalgically reminisces on the many guests Manna Wok has served.

“We’re kind of just family and friends,” Kye-Chon proudly remarks as I indulge in a hot serving of deep fried Korean Mandu filled with pork, cabbage, scallions and garlic.

“When people visit Wichita, they always seem to stop by here.”

As I dig into a bite of sweet, pickled kim-chi, Kye-Chon points to a photograph of a woman on the western wall of the restaurant. She recounts how the subject of the photograph — a regular customer at Manna-Wok — had since died, losing a battle with heart disease.

Kye-Chon remembers one day a few years after the customer’s death, a patron came into Manna Wok with questions about a relative of theirs. They told her their relative had been a regular at Manna-Wok and came in nearly every day for lunch, ordering the Bi-Bim Rice. The kicker happened to be that they had no photographs of their now deceased relative.

It turned out the Chon family knew exactly who the customer was talking about. Kye-Chon immediately directed her customer to the photo of the woman who had fallen victim to heart-disease.

The photograph was of the customer’s mother. Kye-Chon quickly gave the customer a copy of their mother’s photo and cooked them a meal of Bi-Bim rice.

“Every picture has a story,” Kye-Chon said. She also remarked on the, “lots and lots” of photos of customers they have collected at Manna Wok over the years.

Aside from the highly palatable brand of Korean cuisine served at Manna Wok, the environment emanates a personality reminiscent of the familial household. It is a hole in the wall, yet not quite Bohemian or overtly underground for the sake of being so. Manna Wok simply feels like a kitchen with a dining room scattered with books and nick-nacks where you might enjoy a hearty bit of beef bulgogi or curried vegetables on a Tuesday afternoon away from work or school.

Some of the more notable example of Korean fare available at Manna Wok include:

Bi Bim Rice ($7.50) – A stirred and steamed amalgamation of savory garlic beef, carrots, cabbage, bean sprouts, boiled murdock root and scallions, all served atop steamed Bakami rice. It comes served in a steaming hot pot dish that comes to the table just out of the fiery wok — whipped up at the hands of Yong-Chon.

Stir Squid ($8.50) – A take on grilled calamari, Manna Wok’s attempt at barbecue is a tangy, barbecued squid dish might be the most overriding dish on the menu. Long marinated strips of calamari squid are grilled with carrots, onions, bean sprouts, bamboo shoots and green onions which are then topped off with a barbecue-like sauce — comparable to teriyaki or oyster glaze. The squid is pleasantly chewy and doesn’t lose its full, savory taste halfway through a bite — something of a rarity in calamari dishes.

As with the pattern of neighborhood restaurants south of town, Manna Wok’s prices are slim, and the staff — consisting of husband and wife — are personable and pleasant. The tastes there hit you with a nostalgia for home-cooked meals from a childhood long gone. Despite serving food that is distinctly Korean and south-east Asian in recipe, the menu at Manna Wok makes you feel like you’re eating something your mother cooked — simplicity being the example of something agreeable to the stomach.

Cheap, quiet, humble and reminiscent of its patrons’ history via photographic record, Kye and Yong-Chon’s Manna Wok is serves as an apt example of where to find blue-collar, savory cuisine that feels like home in an environment celebrating the past.