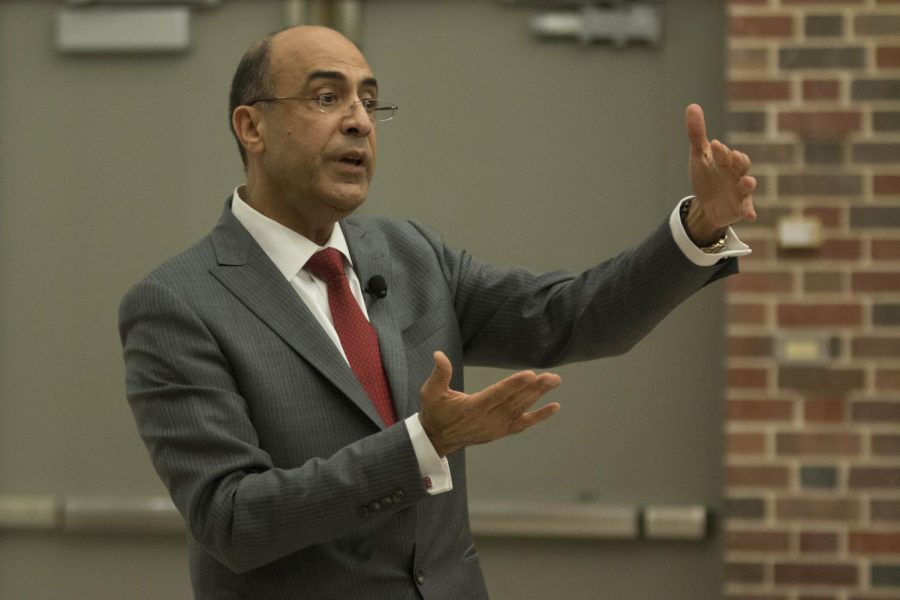 Hesham El-Rewini, a candidate for provost and chief academic officer at Wichita State, visited campus Wednesday and spoke at a public forum as part of his candidacy.

El-Rewini currently serves as senior vice provost and dean of the college of engineering and mines at the University of North Dakota.

“At this stage in my career, I have been drawn to the human aspect of leadership,” El-Rewini said. “Lately, I’ve been more interested in the topics of mindfulness, self-awareness, self-reflection, empathy, these kinds of things.”

El-Rewini said that as funds from the state and federal governments have decreased in recent years, it has put pressure on universities to rely on other sources for funding.

El-Rewini said that a majority of universities in the United States will overcome contemporary financial challenges, and those who “employ innovation” will “thrive and prosper.”

“The Innovation Campus is a great thing. We need to engage more people, not only engineering and business people.” El-Rewini said.

“Liberal arts and sciences, education, others need to be part of this movement for innovation.”

El-Rewini stressed advocacy for the arts and humanities departments, and that all departments should be funded sufficiently.

“Our role is, of course, to disseminate knowledge, create new knowledge, and to help lift our communities, and to help the economic development of our region and state,” El-Rewini said. “But also more importantly, our role is to help students learn how to think, to help students make meaning of the experiences we observe and encounter … to help the students improve the quality of lives for themselves and others.”

“Which part of the university helps people do that?” El-Rewini said. “That’s liberal arts.”

With the rise of technology, El-Rewini said that the need for critical thinking skills and understanding of human complexities were more important than ever.

“I was talking to someone this morning and they said ‘Innovation Campus is a great thing … but liberal arts and sciences cannot contribute there,’” El-Rewini said. “They can, but we need to have the conversation.”

Kerry Wilks, associate dean of graduate school and associate professor of Spanish, asked El-Rewini about the biggest challenges he saw at WSU.

“What I have heard from people is that they wanted better communication,” El-Rewini said. “Communication is extremely important, and has always played a major role in my leadership style.”

El-Rewini said that it was important for the administration to proactively communicate with faculty because they are often busy with work-related responsibilities.

At the University of North Dakota, El-Rewini said he hosts two weekly events for faculty and students to speak with him as well as monthly town halls.

“I like to talk, and I like to listen. Communication is a two-way thing,” El-Rewini said. “So if I were your next provost, then expect numerous opportunities for communication both ways, numerous different channels, different methods.”

The position for provost at WSU is open after Tony Vizzini, former provost and senior vice president, received paid leave from the university in January.