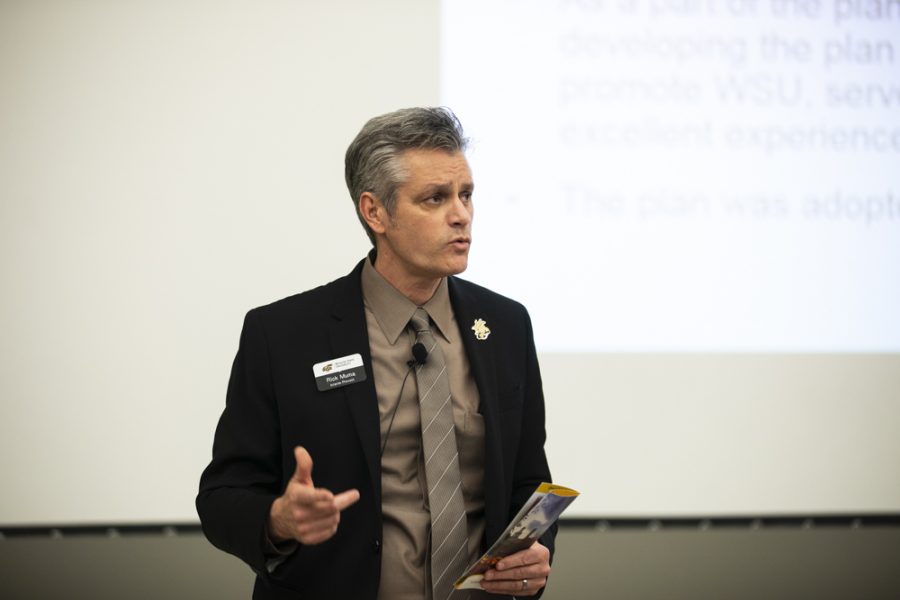 Provost Rick Muma talks about the goals for enrollment during an Unclassified Professional Senate meeting in Hubbard Hall.

Rick Muma was selected Tuesday to become Wichita State’s next provost and chief academic officer, getting the nod over a pair of vice provosts from the University of North Dakota and the University of Alaska Anchorage.

Muma, in his twenty-second year at WSU, has served as interim provost since January, when Tony Vizzini took paid leave from the university. Prior to that, Muma was senior associate vice president for academic affairs and strategic enrollment management.

“I’m honored and humbled to accept this responsibility at such a turning point in the history of Wichita State and higher education,” Muma said.

In the announcement, WSU President John Bardo said Muma’s first year priorities will include “innovating in academic offerings” for working adults and other non-traditional students, ensuring students receive “both a broad liberal arts education and an applied learning or research experience,” promoting student recruitment, retention and degree completion, and fostering an environment of inclusivity on campus.

“[Muma’s] leadership of the university’s strategic enrollment efforts, academic re-accreditation and affiliation with Wichita Area Technical College have all demonstrated his ability to work on complex tasks with large groups to achieve great results,” Bardo said.

When asked at an open forum last month what he would accomplish in his first five years on the job, Muma echoed the WSU strategic plan, saying that the university’s top priorities are enrollment, research, workforce development and fundraising.

Muma also said he hopes to address the university administration’s lack of transparency and the broken sense of trust in the WSU community — especially among faculty who say they have been left out of major university decisions.