Shocker softball back in NCAA tournament 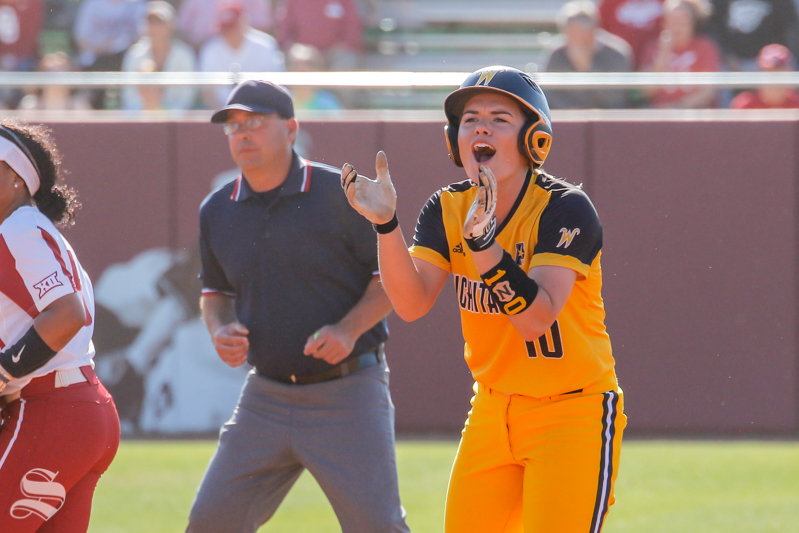 April 11, 2018: Wichita State's Mackenzie Wright celebrates her stolen base during their game against OU at Marita Hynes Field on April 11, 2018.

For just the fourth time in program history, the Wichita State softball team has qualified for the NCAA tournament, following a 30-21 regular season in the their inaugural year in the American Athletic Conference.

The Shockers, No. 32 in the latest RPI ranking, will head to Fayetteville, Arkansas, on Friday to square off against Oklahoma State in a double-elimination regional that also includes No. 13-seed Arkansas and DePaul.

WSU received an at-large bid to the NCAA tournament after losing 1-3 to Tulsa in the opening round of the AAC tournament. Tulsa, Houston, and USF will also be representing the AAC in regionals.

The Shockers swept OSU 9-6 and 5-3 in a two-game season series, and bested Arkansas 1-0 in a March match up at Wilkins Stadium.

WSU last qualified for the NCAA tournament in 2016, when they went 1-2 in the Norman Regional.

The Shockers are led by senior McKenzie Weber, who was named AAC Softball Player of the Year last week. Weber was joined on the All-Conference First Team by juniors Bailey Lange and Laurie Derrico, and senior Paige Luellen and sophomore Ryleigh Buck picked up All-Conference Second Team honors.