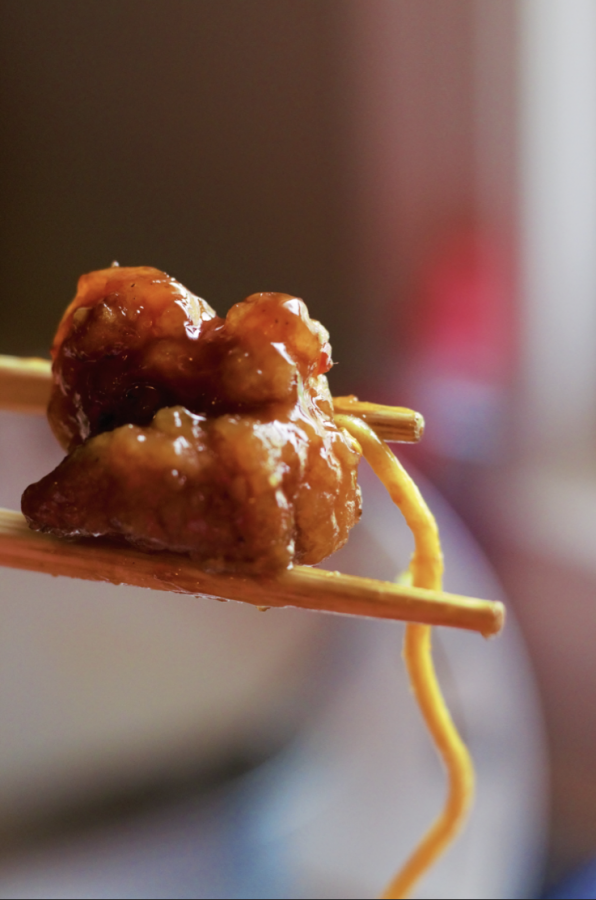 Orange chicken is a staple of Americanized Chinese cuisine.

This week, I decided to embrace that simplistic view and get some local takes on one trope dish of red, white, and blue flavored Chinese food: orange chicken.

Which of Wichita’s chains serves the best orange chicken? Who’s menu offers it most reasonably and for the fairest prices? Which ones are best avoided?

These are the questions I set out to answer by visiting three of Wichita’s better-known, fast-serve Chinese restaurants. Despite looking, smelling, and tasting nothing like its historic stir-fry counterparts served up in Chau Chow restaurants on the streets of San Francisco during the California Gold Rush, orange chicken remains an American favorite.

To get a few answers, I cleared my schedule Friday afternoon and prepared my stomach for Chinese restaurant hopping.

First, I started where most Wichitans go for a quick, dirt cheap serving or two of orange chicken.

At Panda Express charges $6.80 for a double helping of orange chicken with a side. For the more economical amongst you, you can get a rice bowl of the glistening orange stuff for just $5.80.

But does the dish live up to its worldwide reputation and wildly low price?

It’s certainly sweet and tangy as advertised, and you won’t find much cheaper in Wichita. There are plenty of side options as well. To offset the orange chicken, customers can choose from white steamed rice, fried rice, chow-mein, or veggies.

But in all honesty, the orange chicken at Panda Express isn’t that much different than in food court establishments such as Master Wok — which offers the dish for $5.35 — and it features tastes that are equally toothsome.

Overall, the orange chicken at Panda Express is good. Despite being advertised as “sweet and spicy,” it is more of an exercise in the former. It’s rich and has an essence of the sugary orange reduction in which the chicken’s batter is marinated before being fried and delivered to the hungry customer

In short, it’s nothing to write home about.

Opened as a local chain in 2001 by local proprietor Debbie Diec, China Go now has four locations in the greater Wichita Area.

As much as we love supporting the local cuisine, or at least the locally owned varieties of globalized Chinese food, I’m sorry to report the orange chicken at China Go is best avoided.

At China Go, $6.29 will buy you a styro filled with a grantedly generous amount of fried rice and mounds of orange chicken. However, what China Go offers in terms of quantity is unequivocally hindered by their cuisine’s general lack of flavor.

Chop-sticking a bite of China Go orange chicken reminds of bad shopping mall a-la-carte helpings of over-cooked, overpriced, and under-seasoned sweet and sour chicken. That is sans the sweet and sour. Most importantly, the orange chicken at China Go is missing the most important part of the dish: the tropical, citric sweetness of orange flavor that consumers have come to love.

At China Go, a great emphasis is placed on the sheer quantity of the dish’s proportions than on its taste.

In 2011, Fusa moved from its frenetic and perpetually busy location in Towne East Square shopping mall to its current location at 303. S. Greenwich.

Without a doubt, honey walnut chicken has always been Fusa’s main attraction. In 2012, The Wichita Eagle’s Denise Neil called the dish, “the main reason” to visit Fusa,” going on to call it the “perfect balance of sweet and savory.”

I would argue that Fusa’s orange chicken is as good if not better.

For $8.00, customers are served an oyster pail filled to the brim with orange chicken and steamed rice which emanates an aroma of citron and orange — hitting the nose before you even open the box.

Sure, Fusa’s orange chicken is battered, fried, and lathered with sesame oil, just like any other variety of the same dish, but there’s something different about it. It has a fruity sweetness with intimations of the piquant on the palate. Tenderness of the bird is crucial too.

Unlike at Panda Express or China Go — amongst squillions of other establishments where fried chicken is chewy, tough, or gristly — the chicken at Fusa is supple and tender enough that chewing requires no effort at all.

China Go unquestionably served their offering in the largest quantity. Panda Express was no doubt the most cost effective.

However, in factoring in cost, quantity, and the most crucial of all, taste, Fusa serves a brand of orange chicken that does the most justice to foodies in all three categories.