From small towns to the national stage: Veith, True, and Odle head to the NCAA Championships 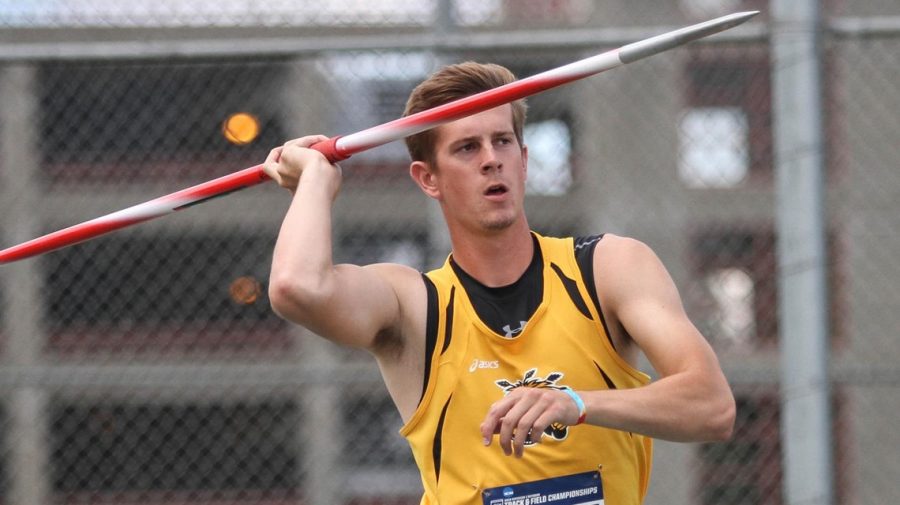 Wichita State track and field athletes Hunter Veith, Aaron True, and Damien Odle all advanced to this week’s 2018 NCAA Track and Field Championships in Eugene, Oregon, but that’s not the only thing they have in common.

The Shocker trio shares a bond of growing up in small-town Kansas.

Head Track and Field Director Steve Rainbolt credits the three Kansans with being the foundation of the program.

“These are three small-town Kansas athletes that are tough, competitive, and guys of high character,” Rainbolt said. “I love that we have built our program around guys like this. We have recruited athletes from all around the world, but it’s undeniable that the foundational core of our track and field operation has been small-town Kansas athletes.”

Veith, a senior from Cheney, said small-town athletes can exceed expectations through dedication.

“Coming from a small town, the eyes were never on us,” Veith said. “We were never expected to do anything. We were tucked away in a small town and no one expects some small town kids to go anywhere.”

Veith, a four-time All-American, is ranked No. 2 in the nation and automatically qualified in the decathlon with a personal best of 8,046 points.

Veith has struggled with back issues this season, but Rainbolt said he is confident in his star’s ability to compete on the national stage.

“Here recently, he hasn’t been 100 percent, but I am really impressed with how he has maintained his fitness the best he can,” Rainbolt said. “I believe he is able to go to Eugene and get through the decathlon and compete at a high level. If there is anybody who can do it, it’s Hunter Veith.”

Even as his body recovers, Veith said he hopes to capitalize on the veteran experience he has gained from his four years at WSU.

True, a two-time conference champion, led the Shockers by finishing fourth in javelin at the NCAA West Regional with a throw of 70.55m/231-5.

True has been attributed to be the driving force of energy on the javelin team, which is ranked No. 1 in the nation.

“Aaron has been inspirational every step of the way this year,” Rainbolt said.

“The atmosphere amongst our javelin group got intense and was really energized. True was hitting on all cylinders and those guys seemed to feed off of that energy.”

True, a junior from Leroy, said he is focusing on keeping a level head despite the greater stakes.

“I’m trying to stay relaxed and stay calm,” True said. “With everything going on around us, there is going to be a lot more camera and a lot more media. Athletes are going to be better, but just going out there and do what I do best and compete.”

Odle, a senior All-American from Greensburg, also qualified in javelin, with a 10th-place finish and a throw of 67.53m/221-6.

After recovering from a season-ending injury last year, Odle suffered from a strain at the Texas Relays this season. The potential of regionals being his final meet as a Shocker was enough motivation for the senior to push through and qualify for the NCAA Championships.

“At Sacramento, that was kind of the push behind me, was that if I didn’t do well, then it was going to be my last time to compete in a Shocker uniform,” Odle said. “I wasn’t ready to be done yet, and I wanted one more shot at a national championship. It’s a special thing and I’m ready to go out there and compete.”

The National Championships begin Wednesday with the decathlon at 2:30 p.m. CT and the men’s javelin at 7:45 p.m. CT.