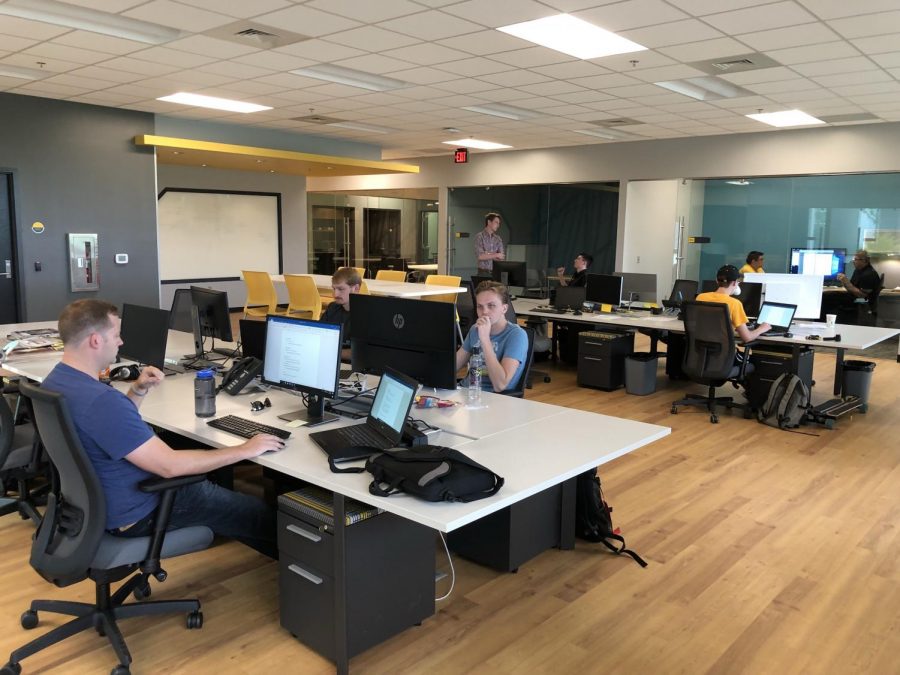 The Aviation and Missile Research, Development and Engineering Center (AMRDEC) funded FirePoint, which is located in the Partnership 2 building on Innovation Campus.

“What’s really cool about what we’re doing here at Wichita State University through FirePoint is that the Army has asked us to support them on their highest-priority programs,” FirePoint Executive Director Peter Perna said.

Perna said one of those programs is developing the next generation of tactical, unmanned aerial systems.

“The world has changed. The era where the U.S. was unrivaled in terms of its strength, prowess, technological advantages — that era is largely over, so we now have to compete with peer and near-peer threats — namely China and Russia.”

Perna said FirePoint is a “tool in the toolbox” for AMRDEC to research and develop technology for the Army. Much of that research is done by a small group of paid student analysts, who work between 20 and 30 hours a week.

“The most exciting thing about what we’re doing is the tie to applied learning,” Perna said. “Right now at FirePoint we have six computer science and engineering students working with us to support our work for the Army. We’ve only got three and a half professional staff, so we actually have more students than we have professional staff.”

Jared Goering, a FirePoint employee and student in the Masters in Innovation Design program, said that responsibility gives students a sense of ownership.

“We’re a big part of the organization,” Goering said. “We actually have the responsibilities and can institute change. It’s not just come in and clock in and clock out.”

“There’s a lot of sitting at the computer and just looking up anything and everything they need us to look up,” Kuffler said.

Engineering major Spencer Lueckenotto said are expected to facilitate connections between the Army and other universities.

“We’re also supposed to be responsible for future collaborations, like between Army officials and other universities — kind of that connecting force when we’re working with them on projects,” Lueckenotto said.

“We don’t work on any secret or classified work,” Perna said. “Everything we do is potentially available to the public.”

Lueckenotto said FirePoint gives students an opportunity to do work that matters.

“This is what I imagine entry-level intern positions should be,” Lueckenotto said. “You’re given responsibilities that matter, but you’re not going to be leading projects yet. You’ve got to kind of work up to that.”

Perna said FirePoint recruited three of its six student analysts at a WSU career fair last month. He said they hope to hire more students in the future.

“Going forward, we’re going to be interested in recruiting students that have both technical backgrounds, so engineering, let’s say primarily, but also business backgrounds,” Perna said.

“There’s a business component to what we do as well as a technology component.”

“I know Peter (Perna) said business and engineering, but that’s just kind of a place to start,” Goering said. “We need people form a lot of different backgrounds, and the stuff that you’re studying isn’t near as important as the stuff you’re interested in and are willing to take the time to sit down and learn about.”

Kuffler said the work done at FirePoint isn’t necessarily relevant to most students at WSU.

“I wouldn’t say there’s a whole lot of involvement with the student body through FirePoint,” Kuffler said.

Lueckenotto said Innovation Campus is a place for more than just engineers.

“There is a lot of stuff for all students over here,” Lueckenotto said. “Like, it’s open. The Experiential Engineering building is open to all students.

“It’s not cut off from campus. You just have to make the walk, but it’s open.”