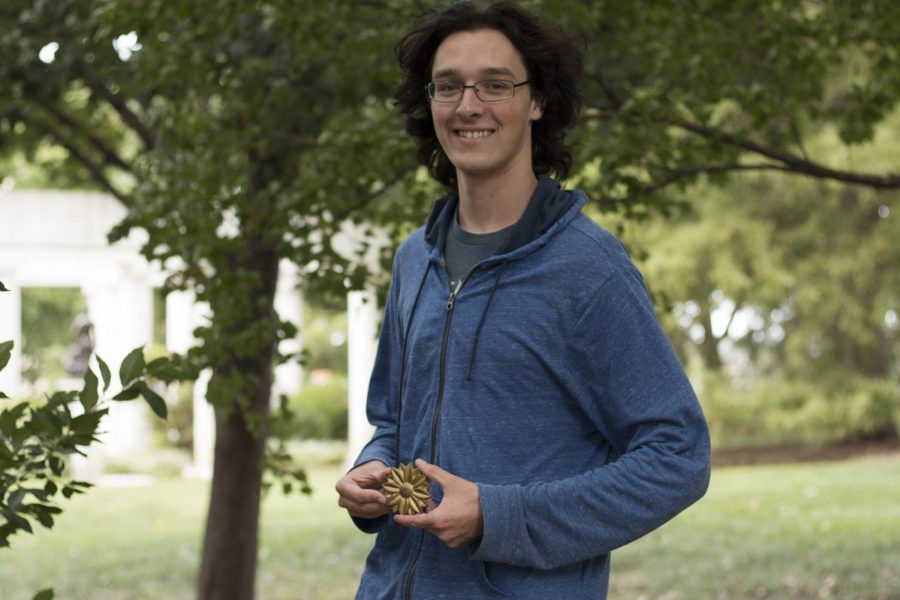 The Sunflower Medallion Hunt came to an end Friday afternoon when, after five days of searching, sophomore graphic design major Christian Hurst took one last look under a streetlight in the southwest corner of campus.

Hurst was about to give up the hunt for the day when he made the discovery.

“I’m getting ready to call it,” Hurst said. “I feel like I’m just going to wait for tomorrow’s clue to see if I can get anything closer, and I looked from the other side and I’m like hey, that’s actually it.”

As the winner of the medallion hunt, Hurst received a $300 Shocker Store card, a $100 Starbucks gift card, and $100 in Shocker Dollars, courtesy of Student Affairs.

He said his win was a family effort.

“My mom was out there sometimes,” Hurst said. “You know, she likes scavenger hunts and stuff too, and she helped with a lot of the clues and everything.”

Hurst and his mother celebrated the discovery by eating lunch together in the Rhatigan Student Center.

He isn’t a coffee drinker, but that doesn’t mean the Starbucks gift card will go to waste.

“My parents helped me research some of the bigger stuff, so the $100 Starbucks card is going to my dad,” Hurst said.

He already bought his textbooks for the semester, but Hurst said he hopes to use his Shocker Store gift card to get his money back.

“I also have a plan to return all of the textbooks I bought this semester so I can buy them again with the [Shocker Store gift card].”

Hurst said it’s more practical to re-purchase his textbooks than to go on a spending spree in the Shocker Store.

“I don’t know what I would need with $300 in Shocker hoodies, but I do have a lot of textbooks that I need.”