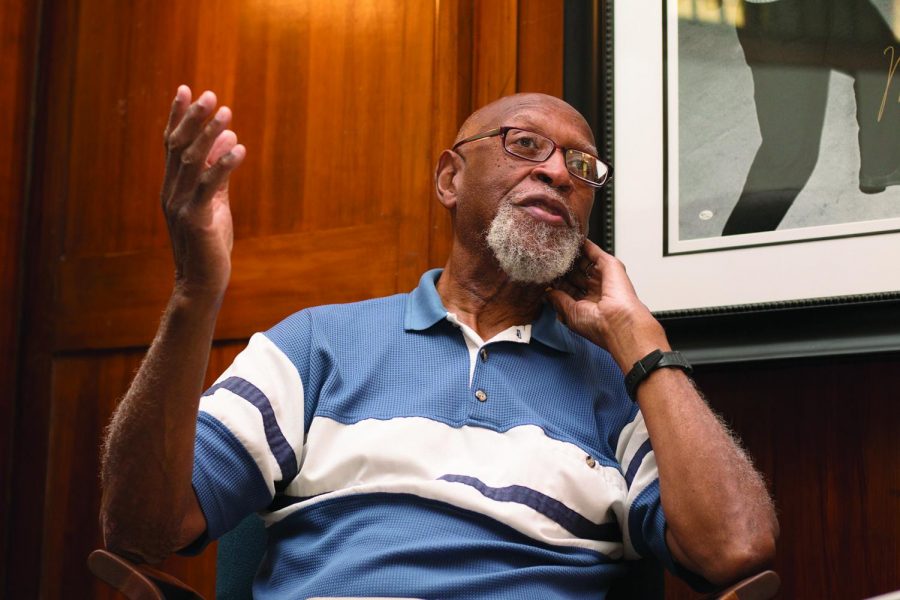 In August of 1958, Wichita youth staged a peaceful sit-in that led to the successful integration of drug store eating counters throughout the city. The tactic was later embraced around the country and sit-ins became synonymous with the civil rights movement.

The Dockum Drug Store, which was part of the well-known Rexall drugstore chain, had nine Wichita locations. The store policy was not to allow black people to eat at the counter. Drugstore eating counters were common at that time.

Galyn Vesey, who graduated from what was known at the time as the University of Wichita in 1961, participated in the historical Dockum sit-in. He said that black working adults “would have appreciated a hot cup of coffee and a place to sit down inside while they were waiting for a bus. But unfortunately, they would have had to get that cup of coffee and go outside and wait in the cold.”

A group of local young people, mostly high school and college students, decided to stage a non-violent protest of the segregated eating establishments all over the city.

Most participants were members of the National Association for the Advancement of Colored People (NAACP) Wichita youth group. Though the Wichita NAACP adult members supported the youth, the national chapter did not sanction the sit-in. The Dockum sit-in began in late July 1958 and ended the second week in August.

“We think of sit-ins now as kind of perfunctory,” said Mark McCormick, director of strategic communications for the ACLU of Kansas. “At the time, though, the NAACP national organization did not sanction the sit-in. They thought that these were kids and that these situations could explode into violence. The idea of it made them too nervous to endorse it, so they did not.”

Vesey said that while the goal of the sit-in was to disrupt business until they were served, it was important to them to remain respectful.

“By the time we would get there, there would be white patrons scattered around the counter. Our strategy was, as soon as there was a vacant stool to scoot in there and get that stool. We didn’t want to push anybody or get in a fight to accomplish what we were there for,” Vesey said.

The group spent weeks practicing for the sit-in — working mostly out of the basement of St. Peter Claver Church.

“It took more time to plan the activity than it did from the start to the middle to the end. It was almost mind-boggling how soon it was over,” Vesey said.

The practice they did for the sit-in also may have kept them out of jail.

“If we were called names, if we were hit or spat on, we weren’t to fight back,” Vesey said. “We knew if the police showed up we’d be the first to be arrested. It was just going to be that way.”

The Dockum group didn’t have the luxury of assuming they would escape from the sit-in unscathed. Vesey recalled that recent events were fresh in their minds leading up the sit-in.

Three years prior to the Dockum sit-in, 14-year-old Emmett Till was lynched in Mississippi after being accused of offending a white woman.

“(Till) spoke with a lisp, by the way, which means he might have whistled when he talked. Supposedly he whistled at a white woman. He was taken at night from his home and murdered. He had one eye socket missing and daylight through one ear. His head was swollen,” Vesey said.

“His mother barnstormed the country — going to black churches and organizations to tell the story of what had happened to her son. She came to Wichita and visited the New Hope Baptist Church, down on 9th and Ohio,” Vesey said. “It was packed. She wanted the world to know what evil had done to her son. At the funeral, she insisted on having the casket left open. “

White students were also involved in the protest.

“One of our members, Robert Newby, was in the band at Wichita University. On Saturdays, he brought a handful of white students with him, and of course, there were black college students from WU and Friends University. It’s much more complex than the story is often told,” Vesey said.

The Dockum sit-in protesters ran into the issue of a lack of press coverage. Vesey said they were intentionally ignored by the press.

“You needed publicity and we weren’t going to get that,” Vesey said. “Our belief was that all that was planned. We felt that they all thought the less publicity, the better. Maybe we’d get tired and go away.”

“The downtown white business community was so terrified that the Wichita two daily newspapers, as well as the other news media, refused as a matter of unanimous decision to print or report the sit-in. Of the two local daily newspapers, the Wichita Eagle printed nothing about it and the Wichita Beacon carried only one very small article.”

This, along with the fact that the NAACP did not sanction or report to other chapters about the Dockum sit-in meant that there was no fanfare for the students after Dockum and Rexall integrated their establishments. It was a win for the students, but you wouldn’t know it from the history books.

“Just like we had started, it was over,” Vesey said. “A lot of people in the black community had no idea what had transpired. No idea. There was no parade at that time. Life didn’t have time to recognize us. That was years later.”

“On that day, we had made posters for the first time to set up on the counters and there was a tall guy who had come in to talk to the manager behind the partition. On his way out, he said under his breath, ‘and put those posters down’ so we immediately put the posters down. And I took it upon myself to go back behind that partition. We had never gone back there.”

“I said to the manager, ‘We’re not here to cause trouble, you know. We just came here to be served like everybody else.’ He let it be known that he couldn’t make the decision to do that, but he seemed to be willing to say that he would try to contact some of the business leaders of that establishment if necessary to check on it.

“We had an adult adviser, an attorney named Chester Lewis who said he’d get us out of jail if it came to that,” Vesey said.

Dockum did integrate their lunch counters as a result of the youth sit-in.

Eick writes, “Dockum confirmed via telephone the next day, all their lunch counters would ‘serve all people without regard to race, creed or color.’”

The rest of the Rexall chain also desegregated, albeit quietly, after the sit-in.

“It was part of a chain of events that created a kind of awakening,” McCormick said. “You could argue that it was an important domino in a certain kind of segregation downtown ending.”

McCormick is quick to point out that the Dockum sit-in is an important part of national history. “There may have been other sit-ins, but Dockum was the first successful student-led one,” McCormick said.

For Vesey, being the first isn’t as important as being involved.

“People spend a lot of time talking about how Greensborough wasn’t the first — that place wasn’t the first, and I say poppycock,” Vesey said. “All of them were necessary.”

“I like listening to a tape of Dr. Martin Luther King Jr. speaking at Kansas State. He says, ‘When the students sit down, they are standing up for the best American dream.’ I can’t listen to that enough.”