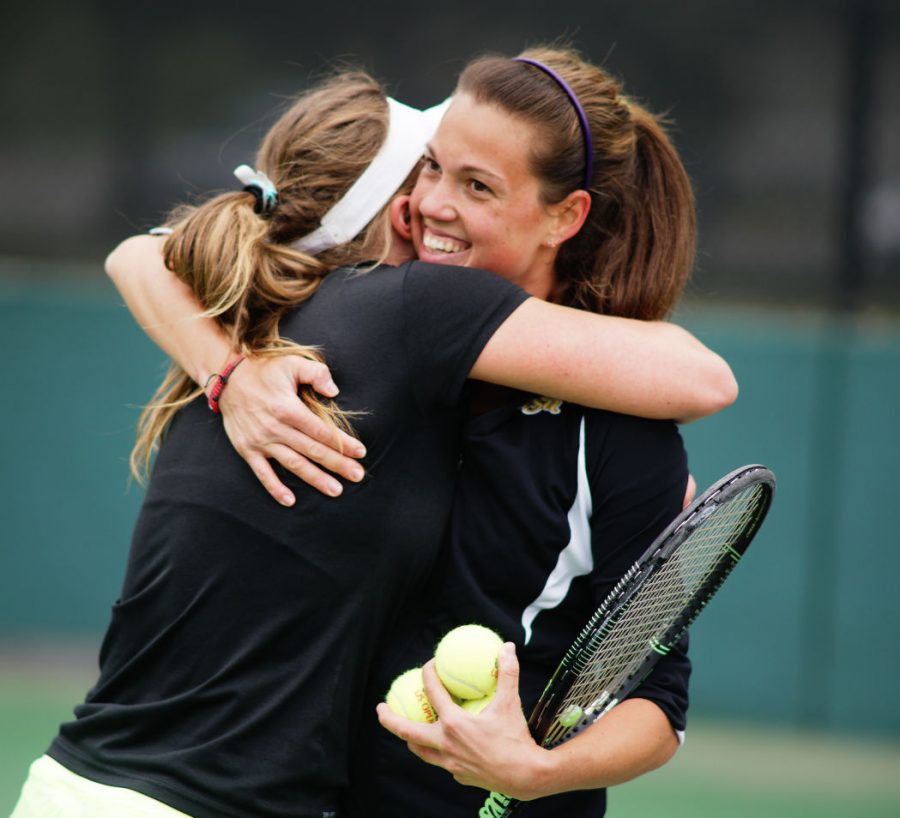 The men’s  and women’s tennis teams each claimed first place in the Missouri Valley Conference Tournament held in Wichita at the Sheldon Coleman Tennis Complex on Sunday. The women claimed their eighth consecutive title, and the men claimed the 25th title in program history.

Having not lost a match since February – Wichita State’s longest winning streak since 1993 – holding a conference winning streak dating back to 2008, and a seven year reign as Missouri Valley Conference Champions, the WSU women’s tennis team had a fair share of motivations on Friday in the MVC Tournament.

On their home court, the women defended their title, claiming the eighth consecutive conference title; the men were dual champions, claiming the top spot for the 25th tournament title in program history.

Meeting for the championship for the sixth straight time, Wichita State took the upper hand on Drake, Sunday, defeating the Bulldogs 4-3 and claiming their third tournament title under head coach Brad Louderback.

A majority of the Shocker’s points came from their performance in doubles play. Sophomore Miroslav Herzan and freshman Haru Inoue defeated Drake’s Ben Lott and Ben Stride, winning six out of eight matches for the victory.

Senior Tin Ostojic and junior Jocelyn Devilliers had a 7-5 victory over Drake’s Bayo Phillips and Ben Wood to claim a 1-0 lead heading into singles.

Inoue continued to keep the hot-streak up for the Shockers, getting a singles victory 6-4 and 6-2 against Drake. The victory put Inoue’s overall record 18-6 on the season and 15-3 in dual matches, both team highs.

Drake came back to win three straight singles victories, leaving the match up to senior Sergio de Vilchez. The Bulldog’s won the first match 6-0, but de Vilchez responded with a 6-4 victory in the second set to force a third and final set.

Stride jumped out to a 4-1 final set lead, but the momentum was shifted in the Shocker’s direction with three straight victories by de Vilchez to tie the set 4-4. De Vilchez defeating Stride 6-4 in the final set to help Wichita State claim the 2016 MVC Men’s Championship.

The Shocker’s women’s team showed their dominance once again, winning their 27th duel of the season and claiming their eighth consecutive MVC tournament championship against Southern Illinois.

Having not lost a match since February 22, their 17th straight win of the season was the longest winning streak in WSU history, when that team won 16 straight games. The Shockers also managed to win their 79th straight conference victory, to go along with winning its 23rd straight conference tournament match.

Sophomore Gabriela Porubin and senior Julia Schiller won the No. 1 doubles match 6-2, while sophomore Giulia Guidetti and senior Abby Stevens wrapped up the doubles portion with a 6-1 victory.

Schiller picked up her third singles win over the weekend, winning the singles match against the Salukis 6-0, 6-3. Guidetti followed with a singles match win 6-2, 6-1, adding to seniors Rebecca Pedrazzi and Aleks Trifunovic singles victory that sealed the deal for the Shockers, shutting out Southern Illinois 4-0 to claim the MVC Championship.

WSU’s men’s team and women’s team punched their ticket into the NCAA Tournament with the MVC automatic bid by winning on Sunday. Both teams will find out Tuesday where and when they will play during the NCAA Selection Show.

The Shockers will hold a watch party in the Champions Club at Charles Koch Arena, inviting fans to come watch where the NCAA selection committee places them. The women’s selections begin at 4 p.m., followed by the men at 4:30 p.m.