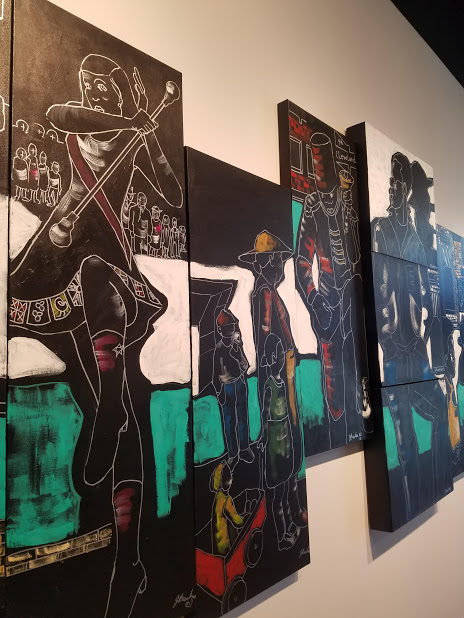 " Promised Land: 9th and Cleveland" showcases the cultural roots in North Wichita. This acrylic painting on canvas by Janice Burdine Thacker is a part of "Neighborhood: PALIMPSEST / Barrio: PALIMPSESTO" currently on display in the Ulrich Museum of Art.

In an area vulnerable to rapid urban development, “Neighborhood: PALIMPSEST / Barrio: PALIMPSESTO” reaffirms the value that lies in neighborhoods such as those in north Wichita. Through their artwork, local artists Ana Hernandez, Alexis Rivierre, Janice Burdine Thacker, and Bernardo Treviso Jr. provide an ode to the community they grew up in.

The north end of Wichita is home to a much higher percentage of racial minorities than the east or west side. The area holds deep cultural traditions that have aged with the weathered, red bricks that define its buildings.

The north side is an often-overlooked cultural hub filled with traditional dance, food, music, and clothing that cannot be found anywhere else in the increasingly commercial streets of Wichita. The authenticity that can be found in the North side is something worthy of recognition.

“PALIMPSESTO” highlights the importance of respecting history. The resilience to keep small businesses open and afloat, the commitment to passing down traditions, and the loyalty to locally grown spaces is what makes the north side unique.

A set of mixed media collages, titled “welcome to the neighborhood,” “of errands and epiphany,” and “on the other hand,” is Alexis Rivierre’s contribution to “PALIMPSESTO.” Her pieces demonstrate how gentrification and development around Wichita State is obstructing the cultural identity of the Fairmount neighborhood. These collages display Rivierre’s emotional response to watching gentrification transform her community.

She uses original photographs to express how communities such as Fairmount are struggling due to the constant urban development. One topic she addresses is the surge in niche establishments such as coffee shops that lack practical resources that the Fairmount community can benefit from.

Ana Hernandez blends the use of Braille and typed letters in her contributions, “green,” “blue,” “yellow,” and “red”. Through these pieces, she illuminates the varying intentions of language and how it can be used to oppress and silence others. In their use of multicolored string and dictionary clippings, these mixed media collages explore the importance of marginalized groups establishing their voice.

Janice Burdine Thacker’s “Promised Land: 9th and Cleveland” forms a continuous stream of the different stories that are based in north Wichita. Through her paintings, Thacker displays the cultural practices that can only be found in this area. “Promised Land” showcases traditional Hispanic dance styles and small local businesses. Her acrylic work on canvas animates the potential and life that these old streets continue to hold.

A palimpsest (Palimpsesto in Spanish) is defined by Oxford Dictionary as “a manuscript or piece of writing material on which the original writing has been effaced to make room for later writing but of which traces still remain.”

This concept can be directly seen in Bernardo Treviso Jr.’s work, “The North Side” and “McAdams”. These single-channel videos are dedicated to telling the stories of pillars in the north-side community such as Dunbar Theatre and McAdams Elementary school.

These animations display the timeline of these spaces, demonstrating how they have continued to develop and grow time. Treviso Jr.’s works are perhaps the most representative display of the core concept behind “PALIMPSESTO.” They show the preservation of historical establishments throughout the processes of destruction and rebuilding.