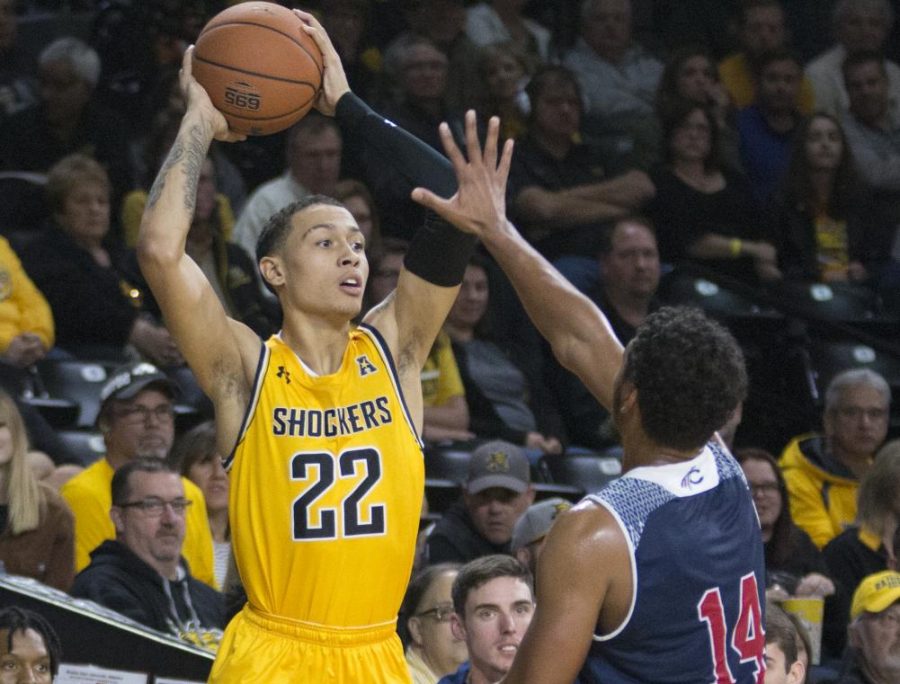 Wichita State freshman Chance Moore looks to pass during the exhibition game against Catawba Oct. 29, 2018. The team announced Monday that Moore will transfer from WSU.

Growing up in Louisville, freshman Chance Moore is used to basketball competing with football for center stage. The lack of a football program is one thing that drew Moore to Wichita State. The Sunrise Christian Academy product said he loves how the WSU community embraces basketball.

“I came here because the coaching staff and the community too.” Moore said. “I like how the community supports the basketball team.

“Wichita State basketball is the biggest thing about Wichita.”

“I’ve played on some teams that are young and dumb and don’t like, do things that you should do if you’re a veteran team,” Moore said. “We need to just be veterans as soon as possible.”

Senior Markis McDuffie said Moore is working hard in practice to prepare himself for basketball at a higher level.

“He’s working. He’s getting better just like all these other freshman right now — trying to get at that level,” McDuffie said. “He’s still trying to realize what college basketball is all about and that’s what we’re doing every day at practice.”

Moore said he hopes to bring on-court intensity and offensive firepower to the team.

“The thing I think I can do to help the team the most is like, my scoring and my energy on the court,” Moore said. “Just being a dog, you know what I’m saying?”

Moore still has plenty to learn about the WSU system, but he’s not alone. He said he leans heavily on a special bond with fellow freshman Isaiah Poor Bear-Chandler, his housemate from Sunrise, who made the leap to WSU alongside him.

“It’s a great feeling just because not everybody gets this when they come to college — jumps into college and has a familiar face they know,” Moore said.

Bear-Chandler said he and Moore have “as much chemistry as teammates can achieve.”

“Me and him, we go way back,” Bear-Chandler said.

“Just me and him being a duo together and having this chemistry, I think we’re going to succeed this year.”

Moore said his friendship with Bear-Chandler has helped him through tough times as he adjusts to college.

“When I’m having family issues or need a shoulder to fall on or somebody to talk to, I can talk to Isaiah because he’s a good friend and we’ve been through a lot since Sunrise, so I think that’s helped me adjust here.”

The Sunrise products have already faced their share of adversity. Chandler missed last month’s intersquad scrimmage due to a concussion. Moore revealed he gave Chandler the concussion while the two were playing one-on-one.

“We were playing one-on-one in the small gym and we headbutted,” Moore said.

He said he helped Chandler stay focused after the injury until he was cleared to play.

“Being there for him — for being the one who gave him the concussion on accident, just trying to support him and tell him he has to stay focused and do everything off the court that Coach (Gregg Marshall) isn’t seeing so when he gets back on the court, he’s going to be in the right place.”

Moore said Bear-Chandler is poised to be a big contributor for WSU’s young team.

“Poor Bear’s a real skilled big man, so he can help us a lot, so trying to keep him on the right path is a biggie for us,” Moore said.

WSU returns just four scholarship players from last season. Moore said it’s up to the newcomers to mature into leaders.

“Any freshman could be a leader on this team,” Moore said. “All of us have leadership. We’ve always been the best players on our team, so we know what it takes to be a leader.”