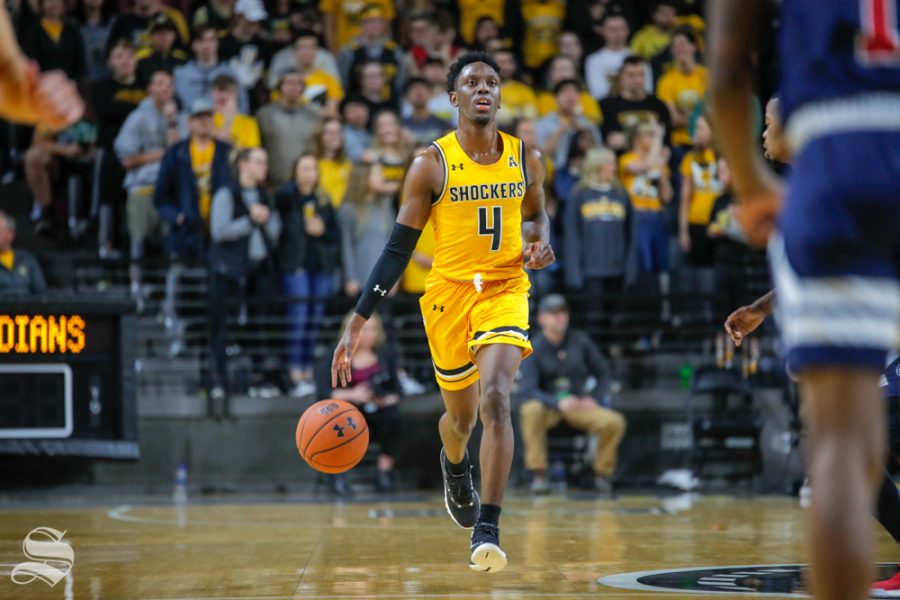 Wichita State's Samajae Haynes-Jones dribbles down the court during their game against Catawba on Oct. 30, 2018 at Koch Arena.

Samajae Haynes-Jones has two goals on the court for his senior season at Wichita State — to “have fun” and to “prove people wrong.”

The Wichita native, one of just two seniors on a young Shocker squad, found an extra bit of motivation when the American Athletic Conference released its coaches’ poll last month.

“We were picked eighth in our conference, so you know, just turn some heads during the conference season,” Haynes-Jones said.

The Hutchinson Community College graduate showed flashes of brilliance in his first season of NCAA basketball while playing behind NBA-bound Landry Shamet. Haynes-Jones hung 31 points in an early-season victory over Savannah State.

Later on, though, stomach issues sidelined the guard, causing him to miss significant playing time. Haynes-Jones said that shouldn’t be an issue this season.

“It was just a lot of problems going on, but I got it settled out during this whole summer, so I’ve been feeling good,” Haynes-Jones said.

Fellow senior Markis McDuffie said Haynes-Jones, who scored a game-high 19 in WSU’s exhibition victory over Catawba, is poised for a breakout season.

“He just had to get comfortable that first year playing at one of the highest levels of basketball,” McDuffie said. “You’ve got to kind of get adjusted. You’ve got to get acquainted. You got to realize what’s going on — deal with the adversity — the highs and the lows.

“He’s going to have a big year this year. I believe in him so much and we all do.”

“I never seen nobody as quick as him,” Brown said. “He’s really gotten better since last year and this year is going to be a really good year for him.

McDuffie said Haynes-Jones has assumed a leadership role on the young team.

“He’s a guard, I’m a forward, so you know, at his position, all the guards look up to him,” McDuffie said.

Haynes-Jones said he’s ready to be a mentor.

“Being with Coach Gregg Marshall for a year has shown me a lot,” Haynes-Jones said. “I can be a mentor to [young players], you know what I’m saying? Show them the ropes, be there for plays, be there if they need somebody to talk to.”

He said leadership means being there for young players “even off the court.”

“You know how hard college is with school and balancing it with basketball and all that,” Haynes-Jones said. “You know, they can talk to me any time.”

As far as proving people wrong, Haynes-Jones said Coach Marshall has built a program that always performs best in the face of adversity.

“That’s how it’s always been here,” Haynes-Jones said. “He has always been known for being the underdog and proving people wrong every year, so that’s just how it’s going to be.”