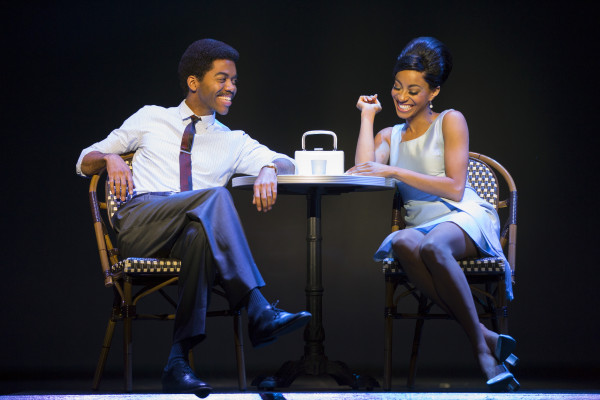 Julius Thomas III was comfortable singing and acting when he auditioned for the title role in the Broadway musical “Hamilton.”

But rapping? Like the Louisiana Purchase for the real Alexander Hamilton, that was new territory for Thomas.

To develop his MC skills, Thomas tapped into a specialty he developed while getting his fine arts degree at Wichita State — tap dancing.

Well enough to land him the role of Alexander Hamilton in the cross-country Broadway tour of “Hamilton: The Musical,” where he stars alongside “Hamilton” creator Lin-Manuel Miranda and others.

“I hadn’t even heard the entire show until I did the audition for it,” he said.

Thomas auditioned for nearly every male role. For each role, he had to perform five songs.

“There were auditions where I probably did like 15 to 20 songs in one audition setting,” he said.

Now he has starred as Alexander Hamilton on the Broadway tour for the last year.

“Hamilton” is a show where the crowd is already won over and on the edge of their seats, Thomas said. But he still gets nervous each performance the first time he walks out on stage.

“I think that’s a good thing, because the moment you get too relaxed and sure of yourself, especially in ‘Hamilton,’ you start to make mistakes,” Thomas said. “There’s so much material — so many words, so many queues — that you really need your wits about you.”

“It was a blast to get to perform for people and have them applaud,” Thomas said. “I didn’t know at that point that it would turn into a career.

“It didn’t really become real to me before I started going to Wichita State.”

He spends most of his time in rehearsals and doing other things for the tour. When he has some free time, he likes to do “nerdy things” — he’s a Magic: The Gathering buff.

And he’s always listening to music.

“Anything neo-soul, folk, anything that has sort of heartstring-tugging lyrics,” Thomas said.

His singing voice was formed from years spent listening to early Michael Jackson, he said.

“Anything with the Jackson 5 was super huge to me,” Thomas said. “Being from Gary, Indiana, which is also where the Jackson Five is from, they’re huge to me. I can still put on the Jackson 5 stuff and fall in love with it.”

Thomas said his love of singing has been a constant in his life.

“And the fact that people want to hear me sing and want me onstage is sort of icing on the cake.”