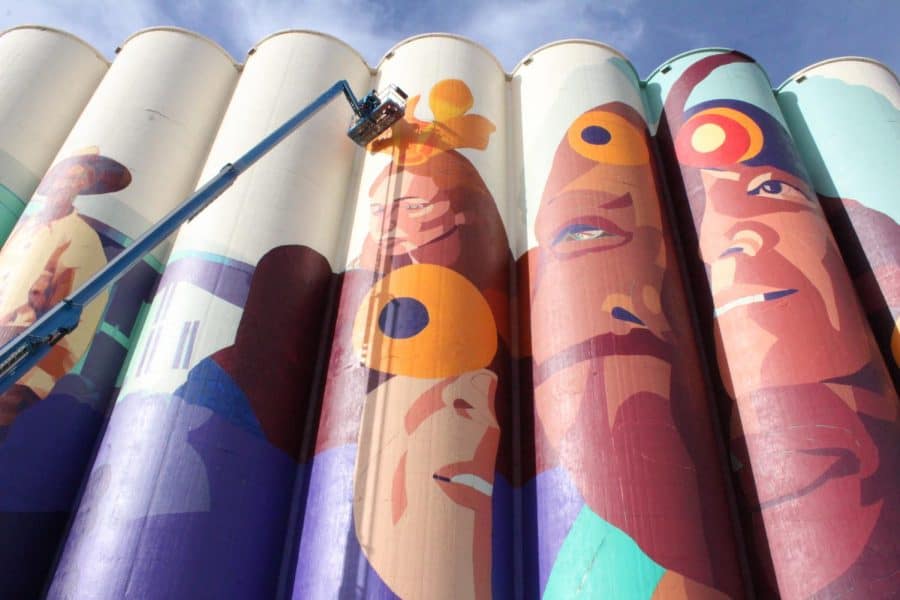 The largest single-artist mural in the world is currently in the works in North Wichita. While world records are notable, size is not the story here.

For decades, North Wichita, composed of the North End and the North East Side, has been a cultural pillar in the community that has lacked the developmental attention given to other sections of the city. Street artist GLeo is painting the nameless mural while Armando Minjarez of Horizontes, a local nonprofit art organization, acts as its director and curator. Together, they are actively combatting the cultural erasure stemming from urban planning and gentrification by quite literally giving Wichita a face that is impossible to ignore.

Stretching the capacity of Beachner grain elevator is the face of a stunning woman of color. An immigrant, the woman’s radiant dark skin is adorned with flowers. Surrounded solely by monumental figures of color, the mural provides a necessary statement about overlooked Americans who call Wichita home.

“The project in and of itself in its entirety is really focused on highlighting communities of color, specifically of North Wichita, which is primarily Latinx, and the North East, which is predominantly black,” explained Dale Small, art director and project facilitator of Horizontes.

The project is “focused on building bridges between those two communities (the NorthEnd and North East Side),” Small said. “The two have been physiologically and physically separated by the industrial corridor and the interstate highway.”

This mural would not have been possible without the photographic elements used to kickstart the project. A panel composed of local artists, community organizers, and North Wichita residents, commissioned four local photographers of color: Ashwin Govindarajan, Alexis Rivierre, Juan Carlos Garcia, and Xavier Leija, to collaborate on the Horizontes portrait project.

Garcia is currently a student at Wichita State, and the others are alumni. Collectively, the photographers shot portraits of actual citizens of the North End and North East Side. Many of the portraits ended up being the reference material GLeo used to design her mural.

With the recent surge of public murals taking over the streets of ICT, it’s relieving to see art that goes beyond aesthetics and sheds light on the people who make Wichita valuable. Wichitans love to boast about living in a city that is proud of its origins. Wichita flags ornament businesses everywhere, ICT bumper stickers flood the streets, and locals go wild for Shocker basketball games.

However, this pride is too often surface-level. With the recent destruction of local pillars such as Mead’s Corner, Lawrence-Dumont Stadium, and Starlite Drive In, it’s apparent that preservation is not the city’s top priority. GLeo’s mural is the first of its kind and will hopefully be the spark in a movement that preserves the traditions and integrity of this city. The roots of Wichita are not suburban. The roots of Wichita immigrated here.