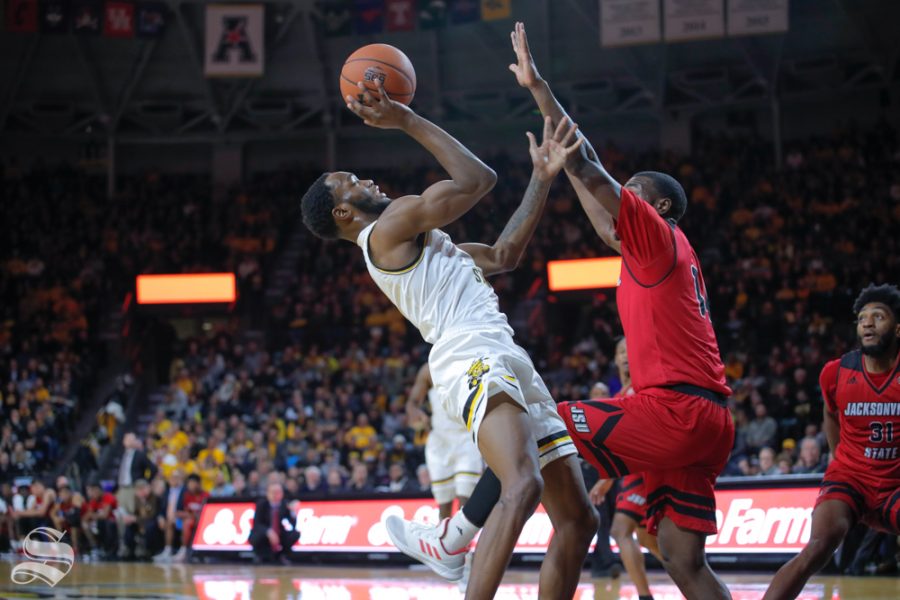 Wichita State forward Markis McDuffie takes a shot during their game against Jacksonville State on Dec. 12, 2018 at Charles Koch Arena.

Haynes-Jones hit an open three-pointer as the game was winding down put the Shockers up four points after Jacksonville State took their only lead of the game in the final minutes. The Shockers held on, 69-65 to put their record a game above .500.

Haynes-Jones finished with a game-high 17 points on 7 of 16 shooting. He added six rebounds and three assists.

“When I saw it leave my hand, I knew it was going in,” Haynes-Jones said of his key three-pointer made with 1:43 left in the game.

“It was an incredible feeling,” freshman Morris Udeze said watching Haynes-Jones put the team up four points in the final minute. “I know how much Samajae (Haynes-Jones) works on that shot in practice. It was a big time shot.”

Dexter Dennis set up Haynes-Jones with a key offensive rebound. Dennis had eight rebounds in the game.

In the past five games, McDuffie has struggled to find his shot in the second half. Over that time span, the senior forward is shooting 28 percent from the field on 9 for 32 shooting.

McDuffie did put the game fully out of reach when he was fouled on a three-point attempt with 34 seconds left in the game. He converted on all three of the foul-shots to create enough safe space for the Shockers to squeak away with the victory.

Echenique finished with a final stat-line of 12 points on 6 of 8 shooting with seven rebounds. Udeze scored eight points and grabbed a season-high eight rebounds.

McDuffie’s nine rebounds were the most by any Shocker this season. WSU out-rebounded Jacksonville State 44-33.

Junior college transfer Ricky Torres made his first career three-pointer for the Shockers in the game. Torres, who was a JUCO All-American at Missouri State-West Plains, averaged 43 percent from deep last year.

Torres connected from three after starting 0-17 on the year. He’s now 1-19 from three this season.

Torres hit a three-pointer, his first in a Shocker uniform, at the halftime buzzer. The shot was ultimately waved off.

Wichita State (5-4) returns to action on Saturday when they take on Southern Mississippi at INTRUST Bank Arena.

Southern Mississippi enters the matchup with a 7-2 record on the season. This will not be the first time Southern Mississippi has played a team from the American Athletic Conference this season, as they have defeated Southern Methodist 74-64. They’re currently on a three-game winning streak.

Tip-off against the Golden Eagles is set for 4:30 p.m. The game will be broadcasted on the CBS Sports Network.