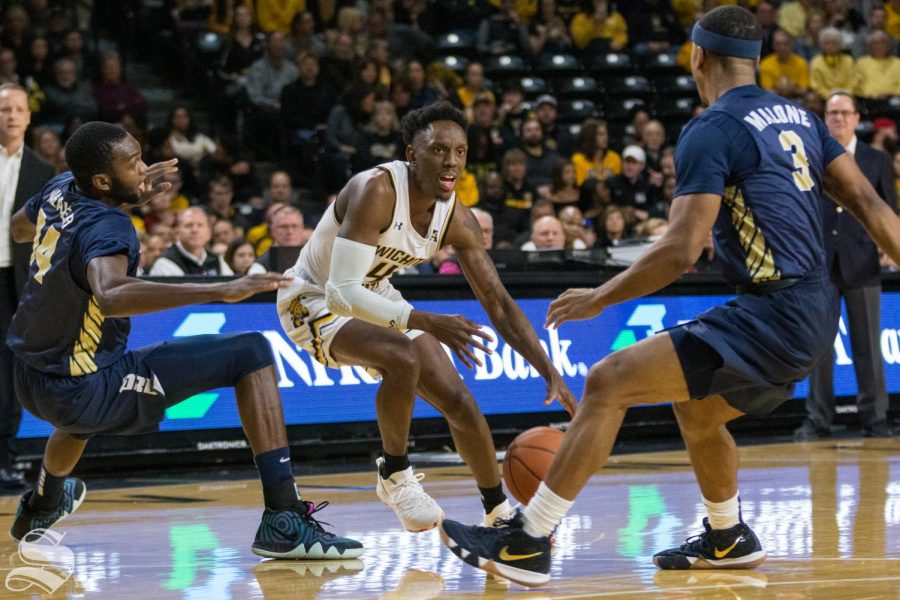 For the first time this season, Wichita State has won three games in a row.

The Shockers scored 12 straight points after trailing the Golden Eagles 15-13 after eight minutes of play. WSU won the game 84-63.

Entering Wednesday, WSU had been outscored by their opponent in the second half of three out of their last four games. WSU dominated a second half for the first time all year.

“There were times we would get up on opponents and they’d fight back. Coach Marshall emphasized not giving them any life.”

Led by senior Markis McDuffie, who scored 25 points (10-10 from the free throw stripe, four Shockers scored in double-digits. McDuffie scored 19 of his 25 in the second half.

“He (McDuffie) was tremendous shooting the basketball tonight,” Marshall said. “You could tell early on that he had a good touch.”

Junior college transfer Jaime Echenique scored 19 points and had six rebounds. He led all players with a plus-minus rating of plus-34.

“We handled all of the bad situations really good,” Echenique said.

Freshman guard Erik Stevenson was 1-9 shooting and posted two points, but his eight rebounds and five assists led him to post a plus-minus rating of plus-23.

Torres, who had one three-pointer all season entering the game, connected again from deep. Finding his rhythm, Torres scored 13 points, while posting six rebounds and one turnover.

“It’s about time,” Torres said of his shots falling. “It’s a good thing though, this program between my teammates and the staff kept their confidence in me.”

McDuffie, a senior, acknowledged that all players face adversity.

“We’re all brothers. We know everyone’s struggles,” McDuffie said. “When he does that, we are going to take this to another level.”

The Shockers had one of their most impressive performances in crunch time this season.

WSU scored 12 points on 5 for 8 shooting, while knocking down two three-pointers. The team also posted eight rebounds and four assists, while only turning the ball over twice in the final five minutes of the game, having most starters pulled from the rotation.

Kaelen Malone is a graduate transfer at Oral Roberts. He played the last two seasons at WSU as a walk-on.

“He went to a great spot, and he’s able to be an elite guard,” Marshall said. “He’s a nice young man and he deserves this experience.”

The Shockers finish their non-conference schedule Saturday at Virginia Commonwealth.

“I feel like we’re on the right trajectory,” McDuffie said. “This road game on Saturday is going to be a big one, and it can’t get any better than playing VCU.”