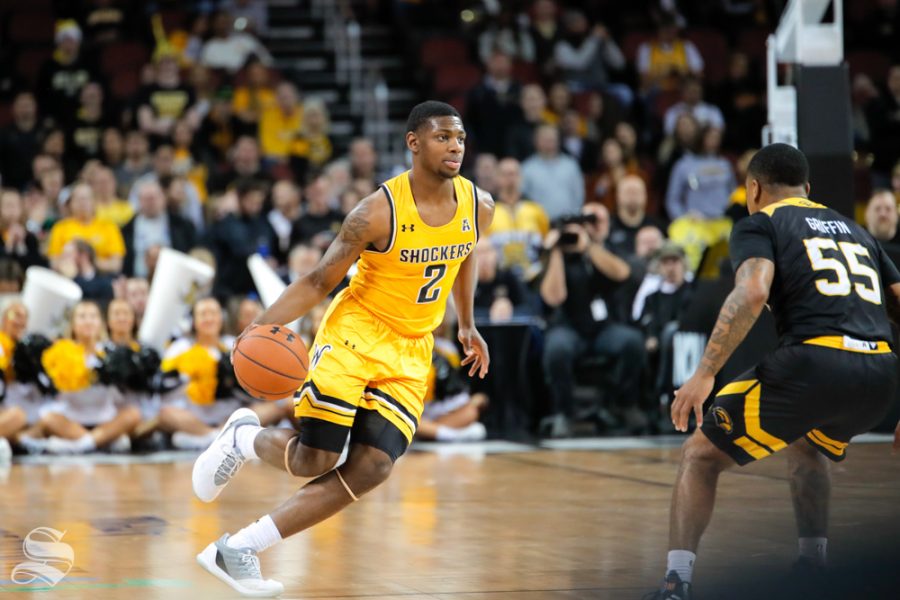 Wichita State guard Jamarius Burton dribbles past half court during their game against Southern Miss on Dec. 15, 2018 at INTRUST Bank Arena.

It’d be impossible for Gregg Marshall to forget the rivalry he’s had with Virginia Commonwealth.

Wichita State and VCU will meet for the fifth time in the programs’ history on Saturday, it’s the fourth meeting under Marshall’s leadership. The teams will begin a home-and-away agreement starting at VCU.

Games against VCU have mattered, Marshall has learned. And for that reason, it’s hard for him to forget a particular moment that defined the rivalry.

Flashback to 2011. WSU hosted VCU as part of a Bracket Busters tournament in early February. Each team was looking for a marquee win to enter their bid for an at-large to the NCAA Tournament.

The two teams swapped leads 12 times. Down a point, WSU put the ball in Joe Ragland’s hands. Ragland was fouled driving attempting a dribble handoff. A career 88 percent free-throw shooter, Ragland hit two shots from the stripe to put the Shockers up 67-66 with less than six seconds to play.

That’s when Marshall says one of the worst fouls of his career was called.

Then-VCU Head Coach Shaka Smart had his point guard, Joey Rodriguez, drive to the right side. Rodriguez threw up a shot with driving away from the basket with .8 seconds left. Ragland was called for a foul.

“That was a crazy bad call,” Marshall said at his weekly radio show. “I hope I can’t be fined 20 years later. It was bad. I told the guy it was bad and he knew it was bad.”

VCU won the game after Rodriguez hit the pair of free throws. A three-point shot at the buzzer went in and out for WSU. The foul defined WSU’s year, Marshall said.

The Shockers fell short of an at-large to the NCAA Tournament, despite a 24-8 record. VCU earned an at-large bid and went on a run to the Final Four. WSU went to the NIT where they won games by an average of 16 points, and defeated Alabama in the championship game.

The following year, the two teams met again. This time, the teams met in the NCAA Tournament. The Rams, riding a 17-game winning streak, snagged a 12-seed in the Tournament to play the fifth-seed Shockers.

“They had been to the Final Four the year before, and they’re a 12 seed?” Marshall said. “I’m going, OK, we get back to the NCAA Tournament as an at-large for the second time since 2006 and now we have to play a reigning Final Four team who has won 17 games in a row? That’s not right.”

WSU lost the game by three. The following year, at VCU, the Shockers won by two in a game that Marshall said helped put WSU in the NCAA Tournament. Malcolm Armstead hit a jumper with 3.6 seconds to play. WSU earned its second consecutive at-large bid that year and went on to the Final Four.

“It’s very difficult to win there,” Marshall said. I just want everybody to know, it’s very hard to win at VCU.”

WSU (7-4) is on its first three-game winning streak of the season. The Shockers are victors of five of their last six games. VCU (7-4) has lost its last two games, including at home to Charleston.

“This road game on Saturday is going to be a big one, and it can’t get any better than playing VCU,” WSU senior Markis McDuffie said.

VCU has won five of their six games at home this season. The Rams enter as early favorites to win the game, according to ESPN and KenPom. However, the teams are a nearly even match according to metrics tabulated by KenPom.

The game could have NCAA Tournament implications for both teams, much like it did in 2011. Marshall said he expects to be an underdog in Saturday’s game and many going forward.