Rick Muma has been at WSU over 20 years. In that time, he has gone from a physician’s assistant to, currently, acting president of the university. Here’s how he got to that point. 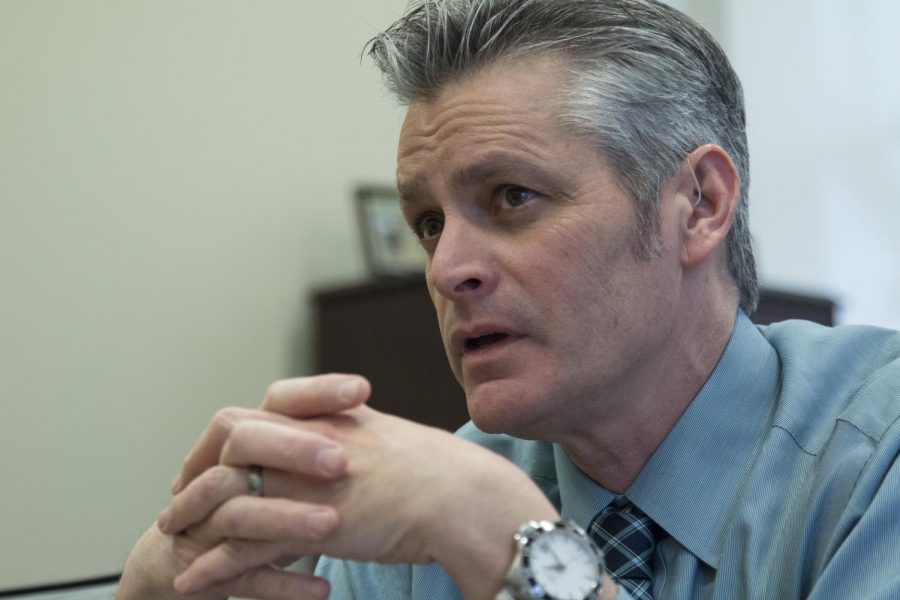 Provost and acting president Rick Muma speaks during at interview with The Sunflower Friday, Jan. 11, 2019.

It’s 1985 — the hospitals in Houston-Galveston are overfilled with patients. HIV has just been identified as the pathogen that causes AIDs. And a 23-year-old Rick Muma has just entered the physician’s assistant field.

Fast forward to 2018. WSU President John Bardo is hospitalized for a chronic lung condition. It’s a situation the university has never dealt with. And a 56-year-old Rick Muma has just become provost. On Jan. 2, he was named acting president.

Dealing with crisis has defined Muma’s career, in many ways — though being provost pales in comparison to taking care of terminally ill patients, Muma said on a winter break Friday afternoon.

Muma was a few minutes late to the meeting, held in the provost’s office in Morrison Hall.

That’s because he was running there from another meeting during another 14-hour day.

Walking quickly but not hastily, he apologized for being so busy, offered a drink, and settled down to talk.

A middle child with two sisters, Muma was born in Wichita but grew up in Houston.

His dad’s family was given land by the federal government to homestead in Maize. That’s where his parents met. He moved to Houston at the age of two with his dad, an electrical engineer.

Anatomy and physiology interested Muma as a teenager. At the time, being a physician’s assistant was a relatively new profession, started in the mid-60s.

His high school choir teacher set him down that path. His teacher came into class one day and said he was going back to school to become a PA. Muma decided he’d give it a go too.

Muma graduated with a Bachelor of Science in Physician Assistant Studies from the University of Texas Medical Branch-Galveston. His first job was in oncology. Once he started his practice, it was largely made up of patients with HIV and skin cancers, which he began research on.

The problem-solving, analytical diagnosing skills he learned in the medical field are central to what he does now as provost — and as acting president, Muma said.

From PA to provost

Muma’s salary is $280,000, according to WSU’s budget book. Taking on the acting president role didn’t come with any additional compensation — which Muma said he’s fine with.

“I’m not concerned about it,” Muma said, soft-spoken but resolute. “I took the provost job knowing that these kinds of things could possibly happen.”

With Bardo out of the hospital but still recovering in a rehab facility, Muma and Chief of Staff Andy Schlapp are juggling extra responsibilities. Schlapp, who rarely provides comment or interviews, is handling the day-to-day things that happen in the president’s office, Muma said — the nuts and bolts of office life.

Muma said “about 70 percent of the university functions fall under the provost.” That’s before the additional acting president responsibilities.

“You never know what’s going to happen here at work, so you better get started before it’s too late.”

While he works long days, he’s in bed early — by 9 or 9:30 at the latest, most days. He’s on call with his “patients” at all times, though. If something happens at the university, he’s ready to respond at any hour, he said.

From provost to (acting) president

Becoming president full-time is not on Muma’s mind, he said.

“I’m not having any kind of thoughts about being a president here or elsewhere.”

Muma clarified that going for the presidency isn’t out of the realm of possibility, but that it’s not something he’s thinking about “right now.”

But he was able to compare his leadership style to Bardo’s — he says they’re “a lot different.”

Bardo is all about the vision, Muma said. Muma is about vision and execution.

“I’m much more into, not just the vision of how we move things forward, but also how we make that work,” Muma said. “I’m looking at both of the issues. You can’t just move forward with vision, you have to move forward with execution. That’s where I am right now.

“Doesn’t mean President Bardo was never there. But again, I have to make the vision work.”

Whatever the vision or idea may be, Muma said he’s making his own decisions and analyzing the data — he’s not a “yes man.”

Every decision he has made or been involved with has been about “what’s best for the university,” Muma said.

“Have there been difficult decisions? Absolutely. But that’s part of making change on campus. If we’re going to move forward, we’re going to have those kinds of situations.”

With President Bardo’s health waning, a Muma presidency could happen.

And “he’s getting a trial-run right now,” one Morrison Hall worker said.

That decision comes down to the Kansas Board of Regents and a search committee — but a provost who has served as acting president certainly wouldn’t be out of the running.

“He’s definitely demonstrated his abilities,” said Stephen Arnold. Arnold is associate dean for the college of health professions and has worked with Muma in various capacities. “People on the inside — they know the institution, they know the people, and they know the processes. I consider that a big plus.”

From an outside perspective, Muma’s ascension in administration has appeared rapid. Arnold said that ascension is unusual, but not unheard of.

“It doesn’t happen often, but Rick is really — I don’t know if ‘earned’ is the right word, but he’s definitely demonstrated his abilities,” Arnold said.

What sticks out about Muma is “he really cares,” Arnold said.

“I don’t care if you’re another president or provost, or a faculty member or staff member, or the guy that mows the lawn. He’ll talk to you the same way. You can tell he’s really listening and really cares.”

Linnea GlenMaye, associate vice president for academic affairs, began working with Muma in the provost’s office within a year of each other.

She said Muma is easy to be around because he’s a real person.

“There’s nothing pretentious,” GlenMaye said. “He can laugh at himself and laugh along with others.

“He’s not the kind of person who has a hidden agenda. You know where you are with him.”

Muma is in the acting president role now because of the experience he gained years ago as a PA, GlenMaye said.

“He’s used to dealing with medical issues and staying calm and collected in what may be a crisis in many ways,” she said. “He has the ability to diagnose the situation and figure out what needs to be done to fix it.”