Do you avoid walking through the Plaza of Heroines? That’s misogynistic, the university says.

Can a seemingly harmless campus myth be misogynistic? Depends on who you ask. But the university wants to do away with the myth. 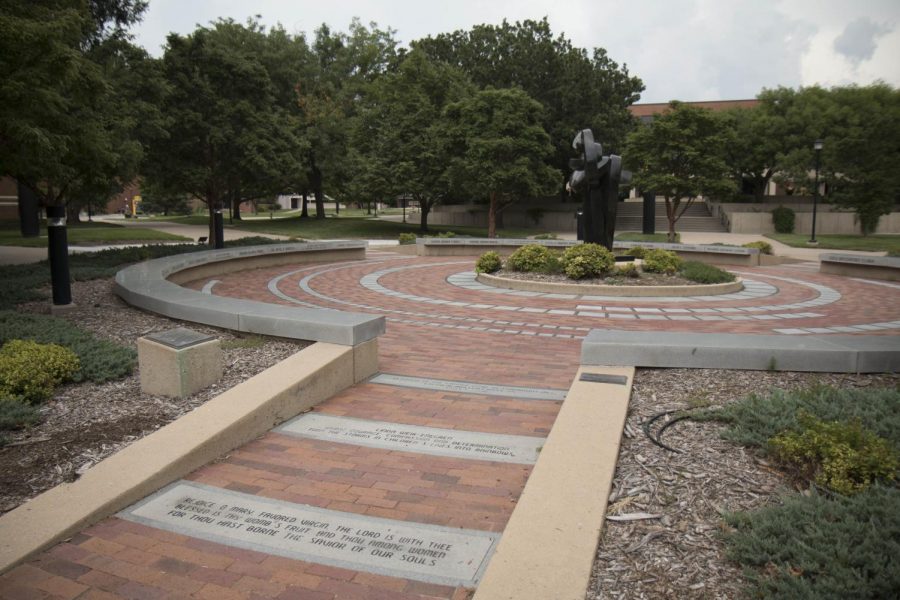 The Plaza of Heroines is located in the middle of campus near Ablah Library. Students avoid walking through it.

Some students are scared of walking through the Plaza of Heroines.

The Plaza is the brick-and-granite circular monument with a bronze centerpiece in front of Ablah Library. Since its dedication in 1998 it has, officially, represented the lives and accomplishments of women.

Unofficially, walking through the circle as a student has meant failing your exams and taking more than four years to graduate — or so the legend goes.

The university says that legend is inappropriate and misogynistic.

Nobody knows exactly how the legend came to be. But multiple students and WSU officials said it may have been started by university tour guides, who created the myth to spice up their tour talking points. Now, tour guides are trained to not talk about it.

Students willingly add extra steps to their class commute to avoid walking through the circle. Better to be late than fail.

Students attend events at the Plaza. But some stay on its outskirts.

“A student wanted to take our food and drink [from inside the circle],” Dr. Chinyere Okafor said, describing a 2018 event at the Plaza. Okafor is director of the Center for Women’s Studies.

“I tried to persuade her to come in. I told her, ‘This brick is [Provost Rick Muma’s] aunt.” Each brick in the monument has a woman’s name inscribed on it. “Don’t you think it’s a good thing for the provost’s aunt to be in here? She said yes, but said she still was worried about stepping in.”

The myth lends to a culture of misogyny, Okafor said.

In the span of a few minutes on Friday afternoon, in mid-30s weather, eight out of 10 students walked around the circle.

And for Thashvin Mahenthirarajah, an industrial engineering senior from India who avoids the circle, believing in the myth comes with his culture, he said.

“We believe stuff like this,” Mahenthirarajah said. “I haven’t walked into [the Plaza], and I’m not going to.

But other students rolled their eyes at the myth.

“It’s stupid,” said Ali, a Ph.D. computer science candidate. Ali did not want to disclose his last name. “It’s a beautiful place. Why’s nobody go there?”

Regardless of stance, most students agreed they didn’t know the meaning behind the Plaza or the significance of each stone.

“They didn’t mention any of that during my tour,” said Kayla Brizendine, a biology sophomore. “I didn’t even know why [the Plaza] exists.”

After hearing about the Plaza’s background, fine arts sophomore Kelsey Vesta said she thinks “it’s kind of stupid the one thing for women [at WSU] is a bad thing.”

Some students said they’d start walking through the Plaza after hearing its background. Others said they don’t see why the university wants to do away with part of campus culture.

Acting President Rick Muma said students may “naively pass [the rumor] along without understanding the negative feelings that may come with it.” He said Shocker Navigators are now trained to talk in their campus tour script about how the Plaza is a place to celebrate all women — “that anyone can pay homage to a woman who has been special and influential to their personal and professional lives.”

Okafor said she hopes to one day completely get rid of the myth and cement the Plaza’s status as a positive place for students.

“For me, I like to walk into that place, because it is highly symbolic,” Okafor said. “It just gives me a lot of power to be walking by the shoulders of women who have achieved a lot, and who have made the world better for people like me.”