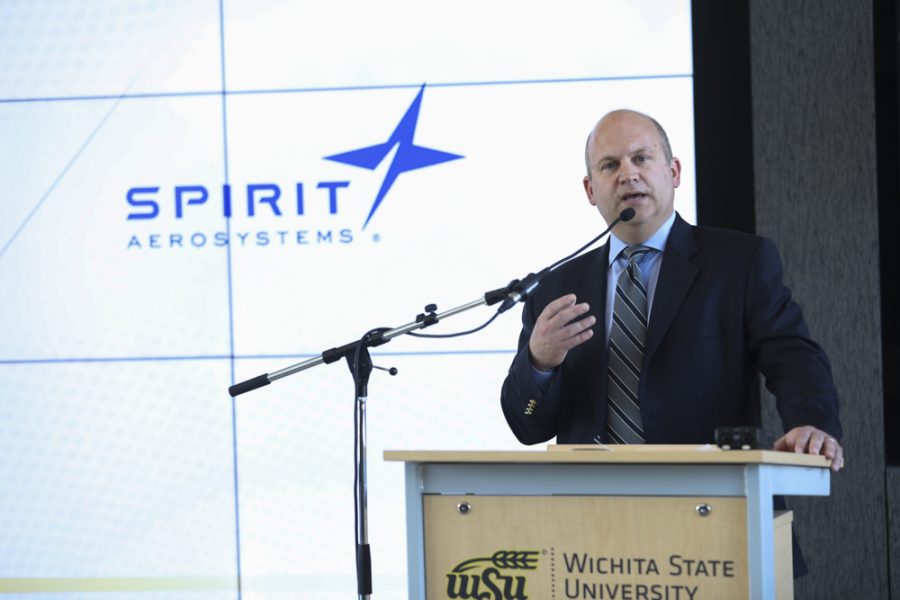 he Wichita State budget book puts John Tomblin’s base salary at $358,000, but records obtained by The Sunflower show that the WSU vice president for technology transfer, who also serves as executive director of the National Institute for Aviation Research (NIAR) and president of the Wichita State Innovation Alliance, was paid $797,869 in 2018.

The next highest-paid state employee at WSU was President John Bardo, who made $364,322 — less than half of Tomblin’s pay.

The records, obtained through the Kansas Open Records Act, show that Tomblin’s actual compensation increased by more than $200,000 from 2017, when he received $576,800.

“Dr. Tomblin’s compensation is aligned with people at his level, with his impact, across the nation,” Vice President for Strategic Communications Lou Heldman wrote in an email. “He has been an extraordinarily effective champion for the university.”

Heldman said that, under Tomblin’s leadership, overall research grants awarded to the university have gone from $50.5 million to $104.5 million in five years.

“Whenever we do any type of general research, whether it’s with the federal government or a private company, there’s an overhead charge that’s incorporated into the cost to that company for doing that research,” Miller said.

“It doesn’t surprise me that [Tomblin] has an allocation there to sponsored research overhead, since he’s overseeing all the research for NIAR and he’s the director of research and technology.”

“In order to keep tuition increases to a minimum, the university is phasing out General Use (tuition) funding for designated centers across campus, of which NIAR is one,” Paul Werner, NIAR director of finance and operations, wrote in an email.

“The sponsored research overhead (SRO) funding was available and therefore used to help cover the loss of this GU funding and to cover the majority of the increase in Dr. Tomblin’s compensation in 2018.”

Miller said the use of SRO funds is justified in Tomblin’s case.

“Dr. Tomblin, I think, has more research to his name than anyone in the entire history of the university,” Miller said.

“Dr. Tomblin is directly responsible for this ranking and for upholding the university’s reputation in research and development,” Werner wrote.

Miller said setting Tomblin’s base salary at less than $400,000 with the incentive of additional compensation acts as a performance driver.

“For someone like Dr. Tomblin, his [additional compensation] is driven by the grants and research that he’s bringing into the university, so if we incorporated that into his appointment letter and his salary is way up here, now what’s the performance driver for him to bring more and more research into the university?” Miller said.

He said that, much like Men’s Basketball Head Coach Gregg Marshall, Tomblin is someone worth investing in to keep at WSU. Werner agreed that Tomblin’s services would be in high demand if he ever decided to leave the university.

“Based on Dr. Tomblin’s experience, expertise, and reputation in the aerospace industry, I have no doubt he would be highly sought-after by industry if he ever chose to leave WSU,” Werner wrote.

Heldman characterized Tomblin as an invaluable asset to WSU.

“We are fortunate to have him as an extraordinarily gifted advocate for WSU’s students, faculty, staff, university and state,” Heldman wrote.

Tomblin did not respond to The Sunflower’s request for comment.

The WSU budget book is available in Ablah Library and on the university website. Miller said the discrepancy between WSU employees’ actual compensation and the salaries that appear in the budget book is not meant to mislead people.

“A budget is always a plan. It’s nothing more,” Miller said.

“Usually, [the budget book] is already out of date a few days after it goes to print.”

Kansas OpenGov is an online database maintained by the Kansas Policy Institute. Its state employee payroll report has not been updated for 2018 yet, but in 2017, Tomblin’s $576,800 made him the second highest-paid state employee. Sheahon Zenger, the former University of Kansas athletic director who was fired last May, made $721,735 in 2017.