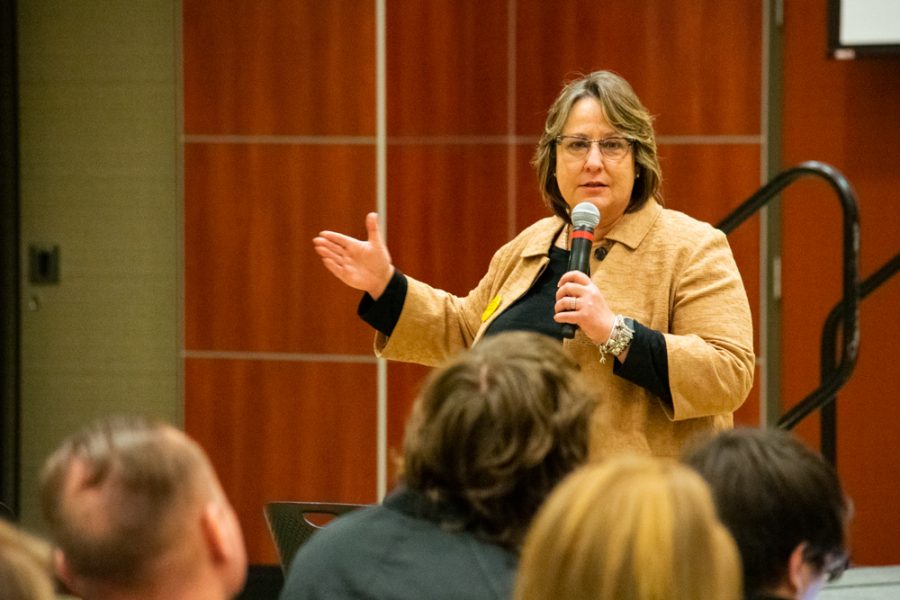 Teri Hall, Vice President for Student Affairs, speaks to attendees during the Town Hall meeting in Beggs Ballroom on the third floor of the RSC on Wednesday, January 30.

Faculty and administrators were well-represented, but no more than 10 students showed up for the first all-student town hall Wednesday to discuss the infrastructure referendum slated for early March.

The proposal is a $6 per credit hour fee hike to bond $38.6 million for campus facilities upgrades across all colleges. More than half of the money raised, $20 million, would go towards the construction of a new business school on Innovation Campus.

“It kind of feels like they took something, very needed of course, but they took a little bit of every single college and put it into the basket just to kind of hold our colleges hostage to be able to fund the new business building,” Sanchez said before the town hall.

State law does not require Wichita State to respect the student body’s choice on the referendum, but Provost and acting President Rick Muma reiterated that if the vote fails, fee hikes will not be forced on all students. If it fails, Muma said, business students will likely see a second vote on a program-specific $30-$35 per credit hour fee increase.

“We will have to find a way to build a business building,” Muma said.

The price tag on the new building is $50 million. Muma said the roughly $30 million in private donations collected by the WSU Foundation is “about as much as we can raise for the project.”

“It’d be problematic to go back to donors and say, ‘No one wants a business building here. We’re giving your money back,’” Muma said.

He said he believes business students shouldn’t be the only ones paying for the new building.

“I’m all about the common good and spreading the burden out across as many people as possible,” Muma said.

“Personally, I think that to have one group of students finance a building is problematic for those students and for this institution.”

He said other infrastructure priorities are worth supporting, including remodeling the play therapy center and psychology clinical labs.

If the initial referendum fails, Muma said, not all non-business priorities will be moving forward.

“Does that mean they’re never going to move forward in the future? Probably not,” Muma said. “But they won’t move forward with this referendum.”

He said not all projects lend themselves to donor support like the business school.

Engineering student Sierra Bonn asked if there was a way for students to propose other priorities for their colleges.

“There’s no women’s restroom on the second floor of the engineering building,” Bonn noted.

“Women aren’t supposed to be engineers, you know,” joked Vice President for Student Affairs Teri Hall. “Don’t take me out of context, please.”

“In terms of the projects, the deans brought those forward after they got student feedback . . . so we haven’t had any conversations in those meetings about, ‘Should we take this off the list or that off the list?’ because after all, the deans have already done that with their own student populations,” Muma said.

When The Sunflower asked Hall for data on student input in November, she said none was available and that deans went about getting it in different ways.

Parallels have been drawn between the infrastructure initiative and the YMCA and wellness center proposal, which the university brought before the 59th Session of Student Government in spring of 2017 with the understanding that if they voted against it, the project would not move forward.

The YMCA partnership was rejected, but two months later, the next session of SGA approved a similar proposal funded by a tiered Health and Wellness Fee that students are paying for a second year.

“Students like to say to me that this is just like the Y — that no matter what comes up, that the university’s going to do whatever they want with this,” Hall said. “What I want to remind you all is that the 59th Session said ‘no’ to the Y, the 60th Session brought it back up. If it wasn’t for the 60th Session coming forward and saying they thought having a Y and a wellness center on campus was a good idea, it wouldn’t have happened.”

“If you can help people understand the difference about that, because that’s really misunderstood.”

Bonn said she thought the town hall was productive, but that she wished more students turned out.

“I’m kind of disappointed in the turnout of students,” Bonn said. “I tried to drag out as many people as I could. I think it would have been more productive if more students would have come.”

The next all-student town hall is Monday, Feb. 11, but various colleges will hold their own town halls in the coming weeks as well.