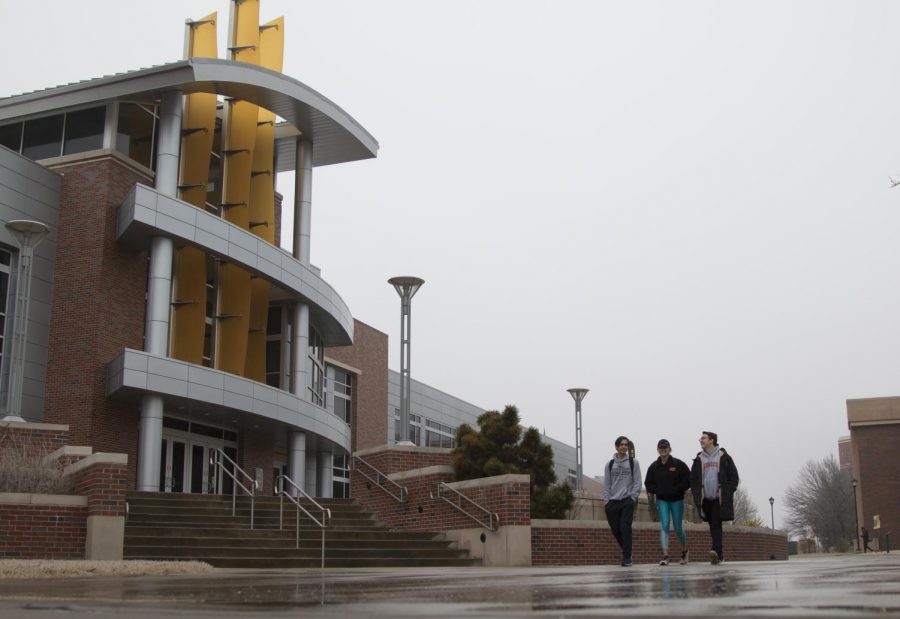 Madalyn Temaat hurried to her 9:30 Moral Issues class Wednesday morning, running behind because of the icy road conditions.

Temaat had parked across 17th Street, so she had to cautiously trek toward campus.

It was black ice. It looked just like wet pavement to her.

The fall hurt, and she cut up her hand, she said. But she tried to brush off the injury, focusing instead on class.

“I didn’t think I had hurt anything [besides my hand],” said Temaat, a pre-nursing sophomore.

But by Wednesday night, she was having trouble sitting, with pain creeping up her lower back, she said. Now she’s worried about having to brave the weather again through the rest of the week.

Icy sidewalks led to dozens of falls, slides and other embarrassing moments on campus over the last two days, with no end to the cold weather in sight — and no definite answer on whether classes would be cancelled Thursday.

Two icy injuries were reported to police Tuesday. But there were many more slip ups.

Frustrated students used social media to send WSU their thoughts on having to brave the ice on the way to Wednesday classes. And on campus Wednesday afternoon, students were equally frustrated in person.

“They always just do the main sidewalks,” Salazar said.

“I saw someone [today] on a bike slip and fall. They were on the ground just lying there, then got up after a few seconds.”

“I’m able-bodied, but people who aren’t — how are they expected to get to class?”

“They just let it all stay [at Bethel],” Al Combe said. “And I don’t think a lot of people are dying here.”

Facilities Services workers were out at 5:45 Wednesday morning salting and deicing. But it’s next to impossible to get rid of every patch of ice, a university spokesman said. Facilities Services plans on being out again at 5:45 Thursday with 30 crew members, even if classes are cancelled.

University spokesman Joe Kleinsasser said Wednesday afternoon that the university is still considering whether or not conditions will be bad enough for class cancellations Thursday.

He said whether the university cancels classes or not, not everybody will be happy.

“I always compare these weather decisions to officiating basketball, and that is, no matter what call you make, you won’t please everyone,” Kleinsasser said.

Bob Smith, executive director of Facilities Services, said there was a full 30-employee crew deicing early Wednesday morning, and that by the start of the day shift, there were more than 100 employees addressing ice concerns. The university keeps a 40-ton inventory of salt, sand and deicer, Smith said.

Smith said the problem Wednesday was that it was so cold outside that some of the melted ice was refreezing.