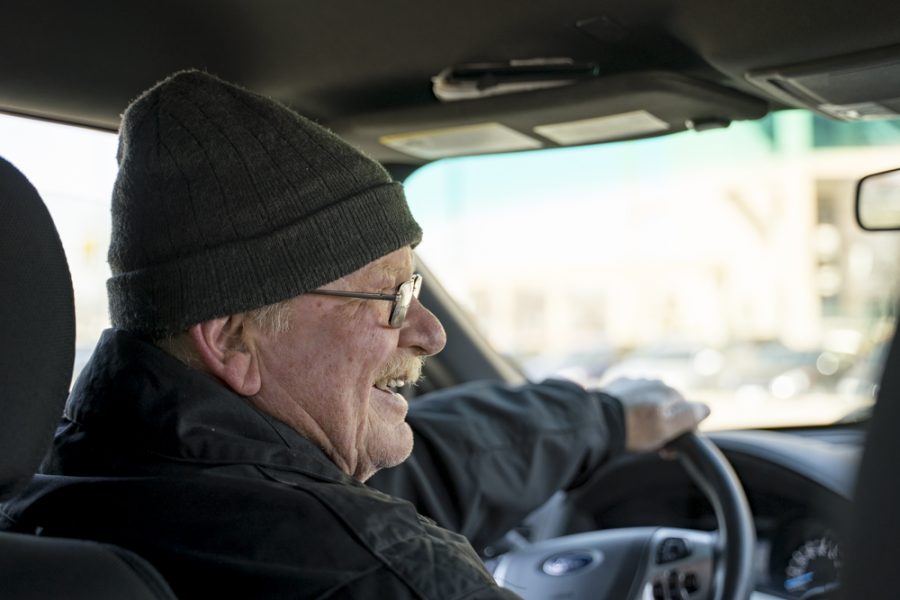 Brian Smith is a 30-year military veteran. He had a heart attack in January and definitely meant it when he said he'd be "back in no time".

Parking services officer Brian Smith woke up with a stiff neck in the wee hours of the morning on Jan. 8. He didn’t think much of it at first, but when the stiffness persisted, he had his wife drive him to the emergency room.

“They slapped me on a gurney right away and put the EKG on me,” Smith said.

That’s when he realized something was wrong.

“I see this doctor fast-walking down the hallway — I’ve never seen a doctor with a scared look like you see on a child or something, but he had a scared look,” Smith said. “He goes, ‘You’re having a massive heart attack,’ and I go, ‘Oh, really?’”

Not much phases Smith, a retired master sergeant with 30 years of military experience.

“Being in the military, you have to stay lowkey,” Smith said.

“If you saw the look on my wife’s face — how scared she was — you have to let them know that everything’s going to be okay.”

Less than a week later, he was back at work, cruising around the parking lots of Wichita State.

Smith wasn’t looking for a second career when he started as a parking services officer in 2007. He had planned to stay in Wichita for a few years before moving to Florida to be closer to his parents, but plans changed when his granddaughter, Ashley, was born.

“We ended up having a little grand princess, and she’s special needs, so grandma and grandpa — we’re staying here to help out with her,” Smith said.

He gets to campus at 6:30 for his 7 a.m. shift, parking in front of the police station with the yellow parking permit he pays for.

Smith enjoys interacting with students and faculty, he said, and doesn’t take it personally when people lash out at him for giving tickets.

“People are frustrated, and a lot of times, they’re just angry about something else and you’re just the target,” Smith said.

“You’ve got so many students that wave and are all smiley. They outweigh the — I’ll just use the two percent rule — of the people that are always causing trouble.”

Smith said he gives out 40-50 tickets on a normal day.

He was skeptical at first when parking services made the switch a few years back to vehicles with license plate scanners. He said he enjoyed doing his job on-foot.

“When we first got these scanners, I wasn’t sure I was going to like them, because I wasn’t going to be able to walk the lots and talk to people,” Smith said. “I’m more enclosed in this vehicle here, but I still find my time to be able to talk to guys.”

He prides himself on his quick response time when a student phones dispatch to ask for help starting their car.

“The biggest thing I strive for is when they call for a jumpstart, I try to get to the jumpstart within two minutes,” Smith said.

He said he makes judgment calls when enforcing minor violations such as parking over the line of a stall — only ticketing when the situation calls for it.

“I’m not here to just generate money. I’m here for the welfare of the students and faculty,” Smith said.

“Brian is a hard worker who conducts himself in a professional, courteous, and helpful manner on a daily basis while serving the WSU community,” Ryman wrote in an email.

Service comes naturally for Smith, who held a top-secret security clearance in the military.

“I’ve been around the world — I was in the spy business for quite a while,” Smith said. “With the Blackbird SR-71 for the first 13 year of my military career.”

As a plane crew chief, Smith said he “got to know everything that was going to go on three weeks before.”

“I was involved with the Iranian Hostage Crisis back in 79 and 80,” Smith said. “I was involved in the situation with [Manuel] Noriega — taking him out. Of course, both Gulf Wars.

His work now is less adrenaline-pumping, but Smith said he relishes the human interaction.

“I’ve had people flip me the bird — that’s not positive. That’s negative,” Smith said. “But I have a lot of people waving, and I can tell by the wave that they’re thanking us for doing our jobs so they can park.”