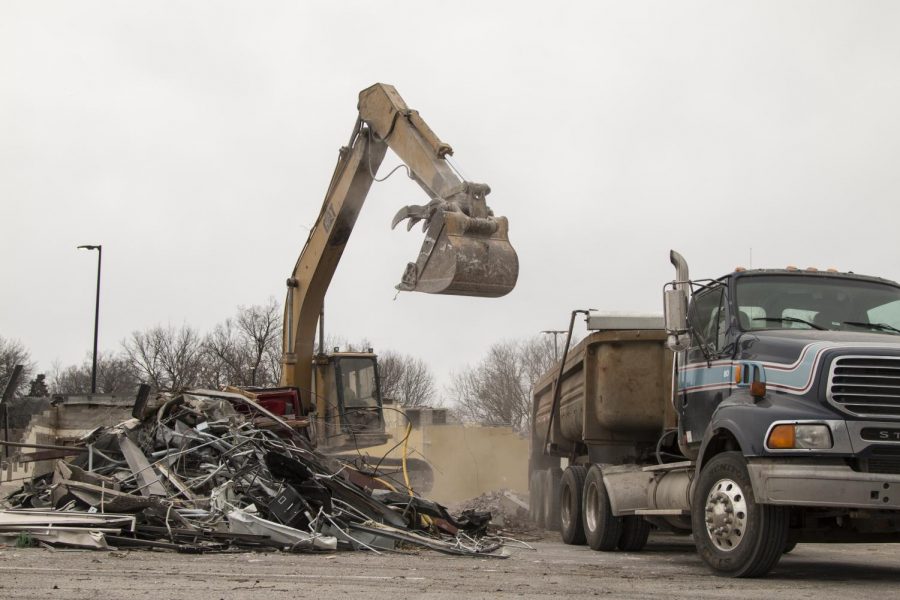 Carla Eckels loves KMUW’s new downtown headquarters, which the NPR-affiliated public radio station moved into in 2016. But one thing Eckels, who is director of cultural diversity at KMUW, does miss about the station’s old building, Blake Hall? The access.

Take, for example, when John Bardo became Wichita State president in 2012. Instead of talking on the phone, or meeting elsewhere, “he just walked across the street,” she said.

And so is Blake Hall. The spot, across from campus near Kirby’s Beer Store, functioned as KMUW and Blake Hall for nearly 40 years before being demolished this week. But before that, the location was a variety of things:

She also remembers interviewing academic and activist Dr. Ronald Walters in the building, a highlight for her. Walters was a leader during the Dockum Drug Store sit-in in the 1950s, and is a Wichita native.

“He was like an icon for real,” Eckels said. “I think he was at Howard at the time. He taught all over. He was one of Jesse Jackson’s speechwriters . . . I was honored when he came.”

Eckels joined KMUW in 1996. The equipment has changed, but the core of what she does — and the people — have stayed the same, Eckels said.

“Buildings, they come and go. But it’s the people that matter, wherever you are.”

Still, each day, on her way home as she passes where Blake Hall used to be, “I’ll always look to my right and have fond memories,” Eckels said.

KMUW is collecting recordings of any content that aired on KMUW over the past 70 years. The content is for a Library of Congress project to ensure Wichita is part of America’s story.

You can contact KMUW engineer Mark Statzer at [email protected]

Before Blake Hall: From The Sunflower archives, February 21, 1969 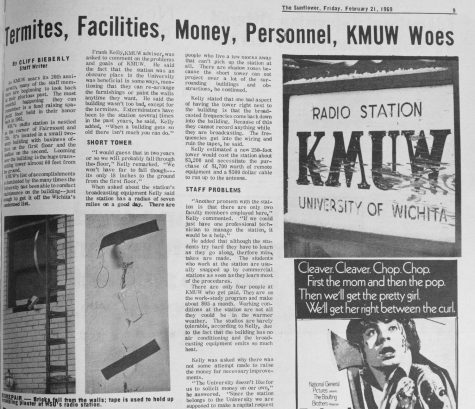 As KMUW nears its 20th anniversary, many of the staff members are beginning to look back at their glorious past. The most eventful happening they can remember is a fundraising spaghetti feed held in their honor back in 1961.

WSU’s radio station is nestled on the corner of Fairmount and 17th. It’s located in a small two-story building with business offices on the first floor and the studios on the second. Looming over the building is the huge transmitting tower almost 60 feet from the ground.

KMUW’s list of accomplishments is dominated by the many times the University has been able to conduct maintenance on the building — just enough to get it off Wichita’s condemned list.

Frank Kelly, KMUW adviser, was asked to comment on the problems and goals of KMUW. He said the fact that the station was an obscure place in the University was beneficial in some ways, mentioning that they can rearrange the furnishings or paint the walls anytime they want. He said the building wasn’t too bad, except for the termites. Exterminators have been to the station several times in the past years, he said. Kelly added, “When a building gets so old there isn’t much you can do.”

“I would guess that in two years or so we will probably fall through the floor,” Kelly remarked. “We won’t have far to fall through — its only 18 inches to the ground from the first floor.”

When asked about the station’s broadcasting equipment Kelly said the station has a radius of seven miles on a good day. There are people who live a few blocks away that can’t pick up the station at all. There are shadow zones because the short tower can not project over a lot of the surrounding buildings and obstructions, he continued.

Kelly stated that one bad aspect of having the tower right next to the building is that the broadcasted frequencies come back down into the building. Because of this they cannot record anything while they are broadcasting. The frequencies get into the wiring and ruin the tapes, he said.

Kelly estimated a new 250-foot tower would cost the station about $3,200 and necessitate the purchase of $1,700 worth of remote equipment and a $500 dollar cable to run up to the antenna.

“Another problem with the station is that there are only two faculty members employed here,” Kelly commented. “If we could just have one professional technician to manage the station, it would be a help.”

He added that although the students try hard they have to learn as they go along, therefore mistakes are made. The students who work at the station are usually snapped up by commercial stations as soon as they learn most of the procedures.

There are only four people at KMUW who get paid. They are on the work-study program and make about $95 a month. Working conditions at the station are not all they could be in the warmer weather. The studios are barely tolerable, according to Kelly, due to the fact that the building has no air conditioning and the broadcasting equipment emits so much heat.

Kelly was asked why there was not some attempt made to raise the moeny for necessary improvements.

“The University doesn’t like for us to solicit money on our own,” he answered. “Since the station belongs to the University we are supposed to make a capital request through them.”

Asked why the University doesn’t supply the money, Kelly said, “I think there are certain faculty members who felt that the less KMUW is heard the better. We don’t pronounce the names of the classics correctly all the time and our music choices don’t suit their tastes.”

Kelly ended by mentioning that the cable TV people have promised to donate some equipment to the station. “We will probably get it one of these years,” he said.

KMUW is collecting recordings of any content that aired on KMUW over the past 70 years. The content is for a Library of Congress project to ensure Wichita is part of America’s story.

You can contact KMUW engineer Mark Statzer at [email protected]