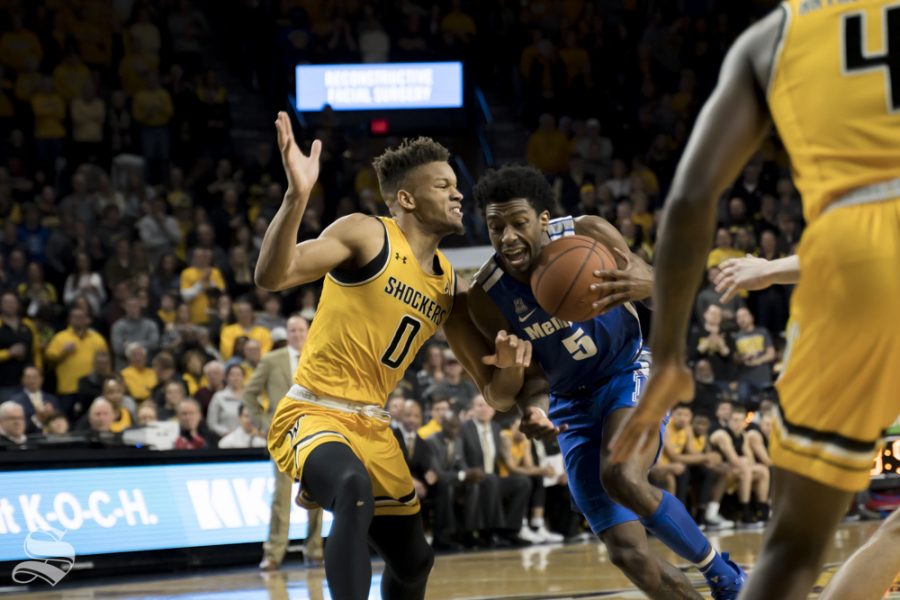 Wichita State freshman Dexter Dennis on defense during their game against Memphis on Feb. 23 at Koch Arena.

Ricky Torres nearly had the game.

He had just swiped the ball out of the hands of Memphis point guard Tyler Harris. An untimed pass switched hands and Markis McDuffie ended up with the ball. He fired an off-balance three-pointer, sank it, and the game was tied with four minutes left.

Wichita State felt like they had it. Like they’d win their sixth out of the last seven games. But they didn’t.

Erik Stevenson hit a deep three-pointer with 42 seconds left, cutting the deficit to two points. Here, WSU had a chance.

Gregg Marshall called a timeout — his last — to set up the defense. Then, Penny Hardaway called a timeout. He didn’t like what he had lined up. Marshall etched out a plan. He’d keep Stevenson on the floor for his offense.

In the next sequence, Stevenson would help set up double-team pressure on Kareem Brewton. He’d aim for a trap situation. If Kyvon Davenport or Kareem Thornton got the ball, WSU would quickly foul.

But when play resumed, Stevenson lost his position. Brewton was in the open floor, and Jeremiah Martin — the Memphis guard who scored 37 points in the game — brought the ball up the court. Out of place, Stevenson remarkably fouled Martin, setting up the perfect free throw shooter with a pair more.

WSU made winning plays. At one point, the Shockers held a 16-point lead. Dexter Dennis continued his hot shooting streak, capping five three-pointers. The team, according to Marshall, is doing the right things but “not playing very smart.”

“I didn’t buy into the hype that we were a great team all of a sudden,” Marshall said, dismissive of the fact that WSU had a four-game winning streak before its most recent pair of losses.

“Basketball a game of runs,” McDuffie said. “We couldn’t contain our silly mistakes.”

Dennis and Jaime Echenique tied with a team-high 17 points. Echenique was seven of eight from the field, including a made three. Echenique also had 12 rebounds.

“In crunch time, to turn the ball over and make mistakes that put us in jeopardy of winning the game — that’s what we did — that’s part of the learning experience,” McDuffie said. “That’s part of the way this season has been. It’s learning from small mistakes.”

Hardaway praised his team for winning an “important one” on the road. He said the environment was comparable to that of an NBA arena.

“It took me back to the NBA days,” Hardaway said of the game. “It was a [NBA] playoff atmosphere.”

The game was a turnaround from when WSU played at Memphis at the start of its conference season. There, WSU was defeated from the get-go, Hardaway said. Saturday’s game showed Hardaway that WSU’s string of freshmen have matured.

“Their freshman understand who they are,” Hardaway said, praising Marshall as a “great coach.”

“I appreciate him saying that,” Marshall said of Hardaway’s praise, “doesn’t make me feel any better right now.”