Source of information or WSU public relations? Steering committee members weigh in on their role 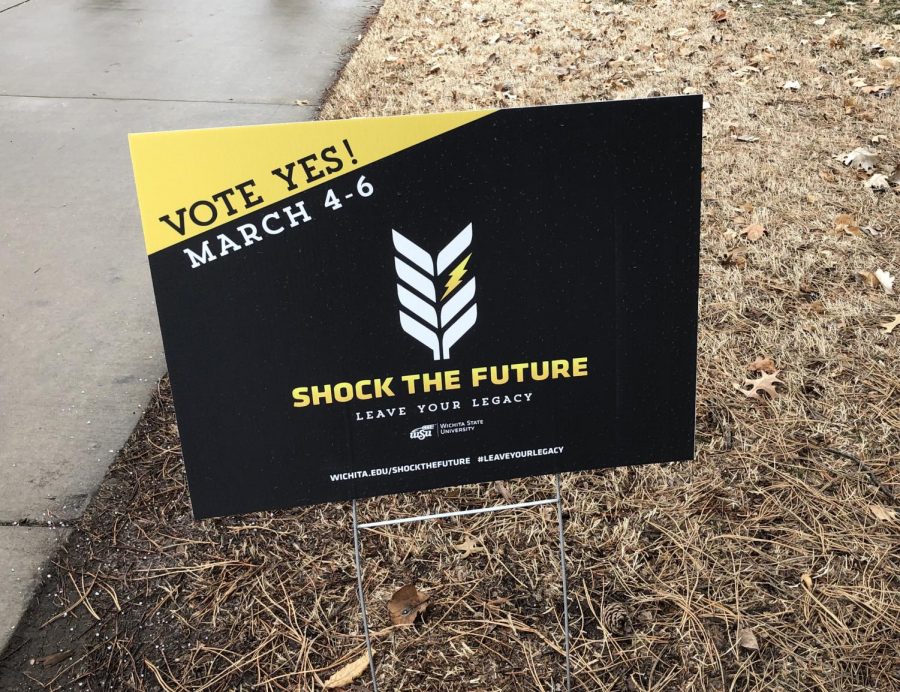 Wichita State’s Shock the Future steering committee has taken the lead on informing students about the upcoming student fee referendum, scheduled for March 4-6.

The committee, made up of student representatives from each college, University Libraries, the Student Government Association, the Institute for Interdisciplinary Innovation, and Strategic Communications, has hosted 29 town hall meetings since WSU rolled out its infrastructure proposal last November.

Last week, a member of the steering committee approached The Sunflower with their concerns about committee management and how much input student members have had on the proposal to raise student fees by $6 a credit hour to pay for campus facilities upgrades.

Fearing retribution from fellow students on the steering committee and the dean who appointed them to it, the committee member requested anonymity, which The Sunflower granted so that they could openly discuss their concerns.

University officials have deemed the infrastructure initiative “student-driven” — pointing to the steering committee as proof.

“I’ve been a part of various committees, and I think when you’re invited to a committee, you understand that you’re going to give your input on the decision,” the anonymous committee member said. “That’s where it got confusing.”

“What I thought was that there were some ideas, and that we were going to make either like the final decision, or we were going to discuss what we can incorporate or what would be better for the university,” the anonymous committee member said.

“Everything was settled already — projects and the fee.”

After the first steering committee meeting, the anonymous committee member sought out student input from their constituents.

“A lot of students asked about the $6 a credit hour — if it could be lower or if there were some projects that could be compromised. That way, the fee could be lower,” the anonymous committee member said.

If the referendum passes, WSU will be able to bond $38.6 million — $20 million of which will go towards the construction of a new business building on Innovation Campus.

The anonymous committee member said one student on the committee proposed raising business-specific program fees for undergraduates from $35 to $50 so that non-business students’ fees could go up by less than $6 a credit hour. They said administrators did not seem receptive to other funding models and wanted to spread the burden equally between students, even though more than half of the money raised by the proposed fee hike would go towards the business school.

Max Karst, a sophomore Health Professions representative on the steering committee, said he never thought weighing in on infrastructure priorities and funding models was part of the committee’s job.

“I never was under the impression that we would choose the infrastructure priorities and finance models, because honestly I know I am definitely not qualified to do that,” Karst wrote in an email. “My impression of the steering committee when I really decided to get behind it was a student group to help get information out to other students.”

“We got the information that you guys are getting, and our job is to get it out there as best we can and come up with ideas of how to disseminate that information so people are informed of what they’re voting for,” San Juan said.

In November, committee members were told they would be divided into a logistics and a marketing committee. Karst decided to focus on logistics.

“I think that logistics (tabling, passing out shirts, getting information out in as many ways as possible) is a big part of the steering committee because we want students to be informed, not necessarily convinced,” Karst wrote.

“I could see how that could be misleading,” Karst wrote.

“Obviously, we would like students to vote yes because we support the initiative, so that’s why we include taglines such as “vote yes,” but the main priority is to be transparent and inform the student body.”

The anonymous committee member said the “vote yes” terminology shows that the steering committee functions as a university public relations campaign, not an unbiased source of information.

“I thought this committee would be more about informing and respecting democracy — letting someone decide ‘yes’ or ‘no.’”

If history is any indication, turning students out to vote could be an uphill battle. Just 1,554 students — 12.3 percent of the student body — voted in last year’s SGA election. That’s down from 19.7 percent in 2017.

In 2010, when WSU raised fees to renovate the Rhatigan Student Center, just 8.6 percent of students responded to an email survey asking if they supported the proposal.

San Juan said the steering committee is doing its part to raise awareness for the referendum, and that it’s up to students to make their voices heard.

“It’s a 50-50 relationship,” San Juan said. “The university’s putting out this information, town halls, signage, to inform students. It’s up to the students to vote on whether they want this passed or not.”

The anonymous committee member said the “student-driven” label doesn’t fit because university officials are determined to move forward with infrastructure projects — at least the business school, which donors have already raised $30 million for.

“I understand why they want to do it — like, they want to make the university better, but the question is, ‘At what cost?’ They’re going to roll over anyone who stands in their way.”