UConn draws a large crowd, Wichita State plans to use it as a turning point to attract a new following 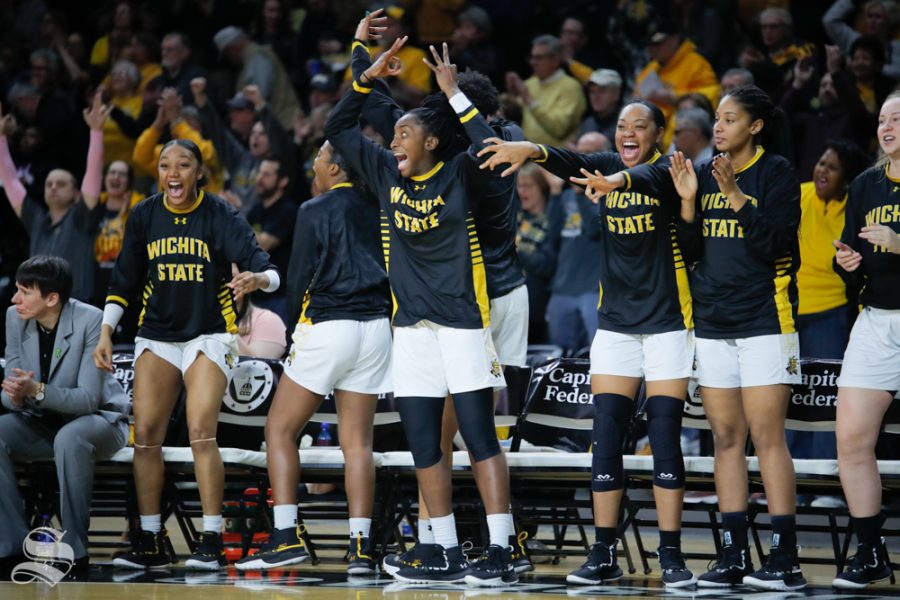 The Wichita State bench celebrates after Sabrina Lozada-Cabbage sinks the first three-point basket during the game against UConn on Feb. 26, 2019 at Charles Koch Arena. (Photo by Joseph Barringhaus/The Sunflower.)

The Shockers hosted No. 2 UConn for the first time ever, and despite a lop-sided victory many expected the city came to see a women’s basketball team still in the middle of one of the biggest transitions the program has undergone in its history.

“We want to be really good role models, especially to young athletes” Lozada-Cabbage said. “It’s to show them that by playing hard, they may one day get to where we are.”

What Wichita State drew was support — support Lozada-Cabbage hopes will return and one day sell-out all 10,506 seats in Charles Koch Arena. There were plenty in attendance who wanted to witness one of the sport’s most dominant powerhouses, a team that’s won all 114 of its American Athletic Conference games. Wichita State coach Keitha Adams calls that “a big slice of humble pie.”

“From last year to this year, we made a stride,” Adams said.

A year ago, UConn throttled Wichita State at its place, 124-43. This meeting was different. The Shockers competed, held two leads, and kept the game within 20 points in parts of the second half — all things not a lot of opponents do.

Adams wants people who haven’t given the Shockers much attention in the last few years to know Wichita State can compete.

“Tonight, it felt good for us to come out and not have that many empty seats,” Adams said. Her goal is to sellout a game with loyal Shocker supporters in the near future. Tuesday was a piece of the puzzle in what she hopes to build long-term at Wichita State.

The vibe was different than the typical women’s basketball game. Crowds hummed “oohs” and “ahhs” as UConn flashed no-look passes and sank highlight-worthy three-pointers. It was comparable to that of a Harlem Globetrotters game. Napheesa Collier, a contender for national player of the year, scored a game-high 32 points and had just two misses. Katie Lou Samuelson, someone who is likely to have a career in the WNBA, sank five three-pointers and scored 18 points on what was an off shooting night.

But not all the crowd was there for UConn, a likely national contender. Wichita State’s Carla Bremaud put the team in good standing with a flurry of jump-shots in the second half, and the crowd aired its support.

“That was crazy,” Bremaud said of the record crowd. “I hope that people can come again. It would be really nice for us.”

Bremaud said she knows that not everyone can make it to every game but would like them to “come when they can.”

Tuesday was a showing out. UConn brings a production crew including a sideline reporter and a backdrop for its own TV network. That’s the standard for a program with indescribable recognition such as UConn.

And sometimes, the result is predictable. But basketball isn’t all just a score.

Wichita State held its own and was outscored 57-42 in the final three periods. Adams showed this might be the turning point of a program that’s struggled with internal issues of its own. The game was about change, and that’s why Adams described Tuesday as a big, tasty slice of humble pie.