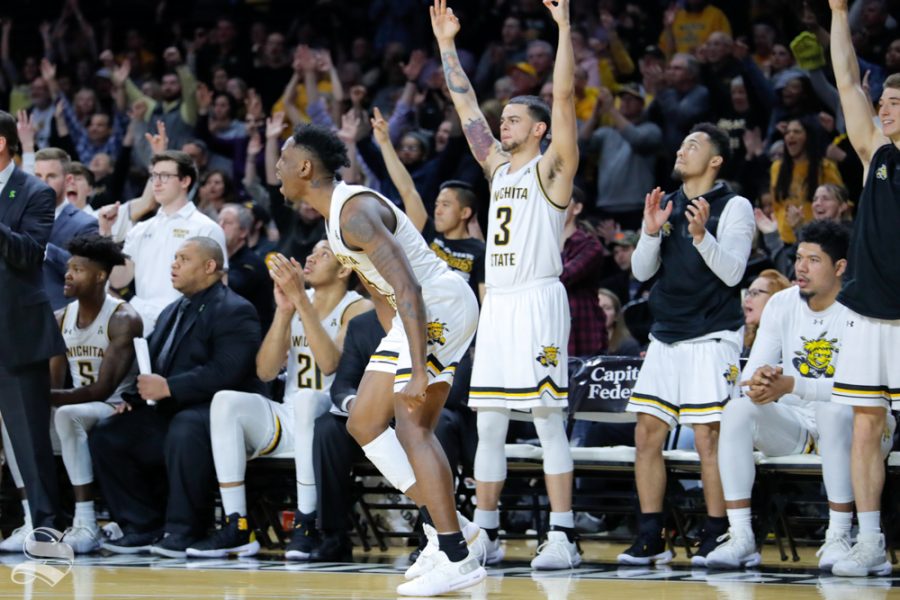 Wichita State guard Samajae Haynes-Jones celebrates in the second half of the game against UConn on Feb. 28, 2019 at Charles Koch Arena. (Photo by Joseph Barringhaus/The Sunflower.)

UConn’s Alterique Gilbert knocked down a 3-pointer to tie the game at 64, which helped identify the Shockers’ defensive collapse in the final 60 seconds of play. But it also put Wichita, and most importantly Haynes-Jones, in a familiar position.

Jan. 30 in Charles Koch Arena, with 13 seconds left and the game tied, Haynes-Jones wouldn’t let anyone else shoot the final shot. He drove underneath the basket and finished a reverse lay-in to give the Shockers a sweet victory. Thursday was no different.

Freshman Dexter Dennis inbounded the ball to Haynes-Jones with 6.4 seconds on the clock, and Haynes-Jones, a blur, blew right past teammate Markis McDuffie. Haynes-Jones missed the screen and threw up a floater. In the next instant, he was dog-piled by his teammates on the sideline.

“It was beautiful,” Marshall said.

Haynes-Jones did more than sink the game’s final shot. His team-high 20 points (12 in the second half) propelled Wichita State to a much-needed victory. Haynes-Jones had three rebounds, an assist, and made four of his nine 3-point shots. He took charges, too.

“He can make plays,” McDuffie said of Haynes-Jones. “For him to go at that speed and get a shot up, it just shows confidence in his game.”

Haynes-Jones took the lead in the timeout, voicing over Marshall. He demanded the ball. Over and over again, Haynes-Jones called for the ball.

Haynes-Jones, this season, has turned into a quiet leader when the Shockers have needed him most. Minus a few off games, he has elevated his play to a whole different level from a season ago, where he averaged just 11 minutes of play. And he’s done it confidently, and humbly.

“It just felt good to get a win,” Haynes-Jones said. “It was a big shot and all, but as a team we worked so hard – to get the win was great.”

PHOTOS: Gregg Marshall celebrates 300th win as Haynes-Jones makes it one to remember