‘Be In the World’: Wichita State’s visiting writer dives into her craft 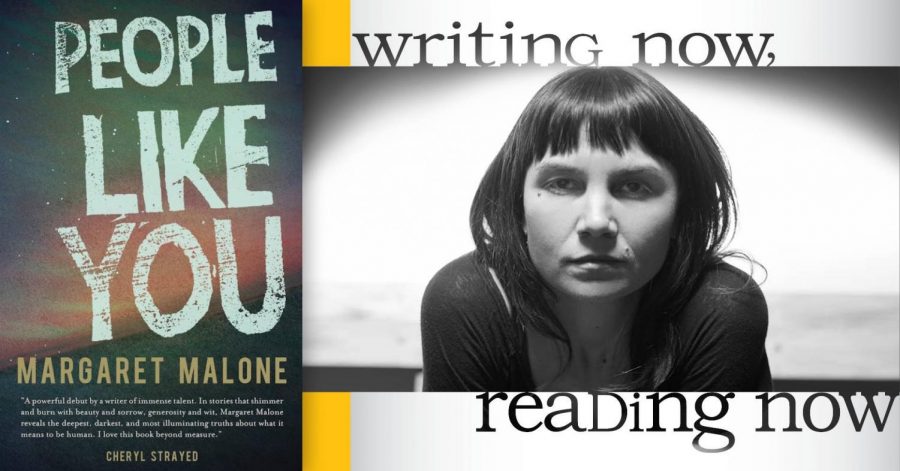 Malone is the author of ​“People Like You​,” a collection of short stories published by Atelier26 Books. Cheryl Strayed (author of “​Wild”​) has even claimed Malone as her favorite emerging writer, writing that Malone is “a writer of immense talent” who “reveals the deepest, darkest, and most illuminating truths about what it means to be human.”

I caught up with Malone at Watermark Books on a recent chilly evening to dive into how she brings life to the page.

BY: First of all, congratulations on the success of your debut novel, ​“People Like You.” ​I absolutely loved reading it. ​ ​The characters are full of flaws, but ultimately relatable. What sparks a story for you?

MM: Story sparks for me come from language fragments that get stuck in my head that I think are cool and I write down, or this thing I’ve come to call “feeling pictures.” I see something and I take a picture of an image with my mind, but the thing that’s captured has a feeling that’s attached to that image. And it’s a story I’ve invented based on the feeling picture.

BY: What is the common thread connecting your stories in ​“People Like You​”?

MM: I mean, I think probably the thing that has always interested me was everyday ways that people try and don’t succeed. After the book came out, I realized the other common theme was lowercase “f” feminism — the small ways that women make or don’t make choices that change their lives. Of the women who are often afraid, in small ways, finally saying no to something or questioning something. I think probably a lot of my 20s were like that.

MM: I ​used​ to write my first drafts by hand (laughs and points to recently broken arm), and then I would enter it in the computer for the second draft, and then I’d print it off and make more edits. Then, I’d cover them in post-it notes, like “What are you really trying to say?” and “What’s missing here?” as if I was workshopping myself.

BY: Since you came to writing later in life, what were the circumstances that finally led you into it?

MM: I was living in Los Angeles with my husband — he was in grad school for film — and I was miserable. Hated it. And was just sort of trying to do everything. I had a ton of weird odd jobs. I have a half sister who lives down there. She told me a story about auditioning for an improv group, and I thought, “I’m going to do that,” because it terrified me. So I did it for two and a half years, and I was sick to my stomach every time. It was physically painful for me.

And then everyone around me was really acting. Everyone started getting headshots, and I thought, “I don’t want to be an actor.” On a whim, a friend of mine was taking classes through UCLA extension, and she asked if I wanted to take a short story class with her. I said yes, but I was terrified. But then I thought, “If I could go onstage and create a character, setting, plot — in a second — then for sure, I could do that on a piece of paper. And then, once I started doing it, I was like, “Ohhhh, this is what I’m supposed to be doing.”

BY: Tell me about being a member of the Dangerous Writers in Portland.

MM: So, Dangerous Writers was founded by Tom Spanbauer, who studied with Gordon Lish. He was a minimalist whose philosophy was deconstructing a classic sentence. You take the thing that’s written and break it down until it gets at a better sense of how people talk in reality. And when you break it down to its subsets, it becomes more closely aligned with what’s true.

So, he taught workshops out of his house. He was our instructor. He’s taught generations of writers. We met every week for five hours. It was a bunch of tables cobbled together with a bunch of tablecloths. Over time, you would earn a place at the table. The people around the table were called pond scum. I made it to the table in three months. You had to wait for someone to leave. We paid every week to be there, but we paid less to be pond scum. You couldn’t bring pages unless you were at the table. It was very democratic.

There is still part of me that considers getting an MFA. It just didn’t happen for me that way, and I feel grateful. I think what was good about meeting Tom was it gave me confidence in what I was kind of already doing on my own, and it allowed me to dip into what my natural instincts were. I feel like if I would’ve gone to grad school, I would’ve been tweaked into a different direction.

BY: Any advice to young or emerging writers?

Margaret Malone reads Thursday at the Ulrich Museum as part of WSU’s Reading Now/ Writing Now Series. The event begins at 6 p.m. Snacks and beverages will be served. The event is free.