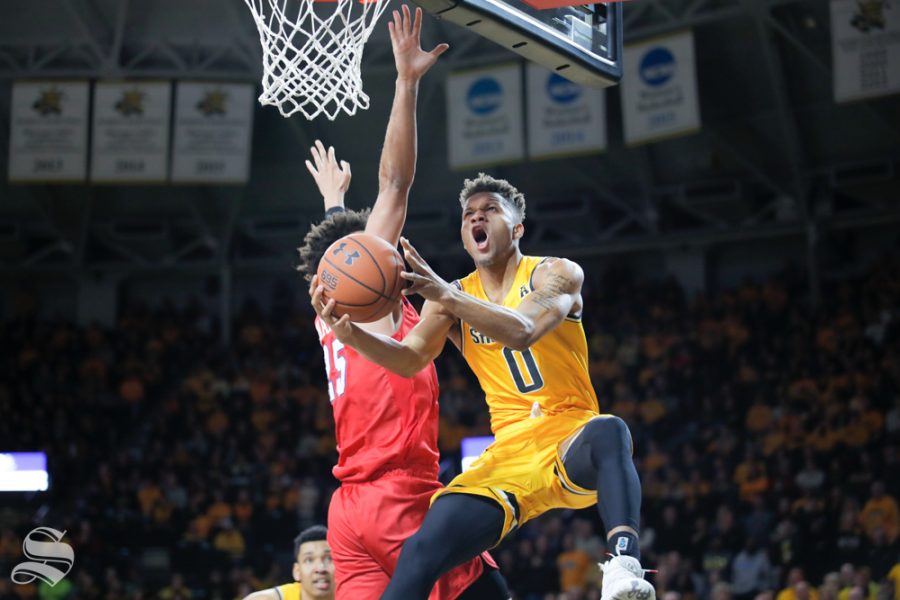 Wichita State guard Dexter Dennis goes up for a basket during the game against SMU on Jan. 30, 2019 at Charles Koch Arena. (Photo by Joseph Barringhaus/The Sunflower).

Dexter Dennis and Markis McDuffie combined for 27 points and 16 rebounds as Wichita State stole its third road win of the season Sunday at Southern Methodist.

McDuffie fought poor shooting, but finished the Shockers’ leading scorer with 15 and a rebound shy of a double-double. The Shockers got a boost from Jaime Echenique, who had eight points and six rebounds.

Asbjørn Midtgaard didn’t show up in the box score much. He had seven points on 2-3 shooting with two rebounds, but his play helped Wichita State open up to as much as a 20-point lead. His defense forced Southern Methodist outside the perimeter, where they made just three 3-pointers on 26 attempts (11 percent). Setting screens on the other end, Midtgaard opened up the lane for Samajae Haynes-Jones and Jamarius Burton, who combined scored 15.

Wichita State moved into sole possession of sixth place in the American Athletic Conference, with South Florida losing to UConn on Sunday. It’s likely Gregg Marshall’s team will be the league’s first team to have a 1-6 start and finish better than eighth in the league.

With two games remaining on its schedule, Wichita State cannot advance to better than sixth in the conference, but cannot likely fall to worse than seventh.