If the season ended today, who would Wichita State play in the AAC tournament? 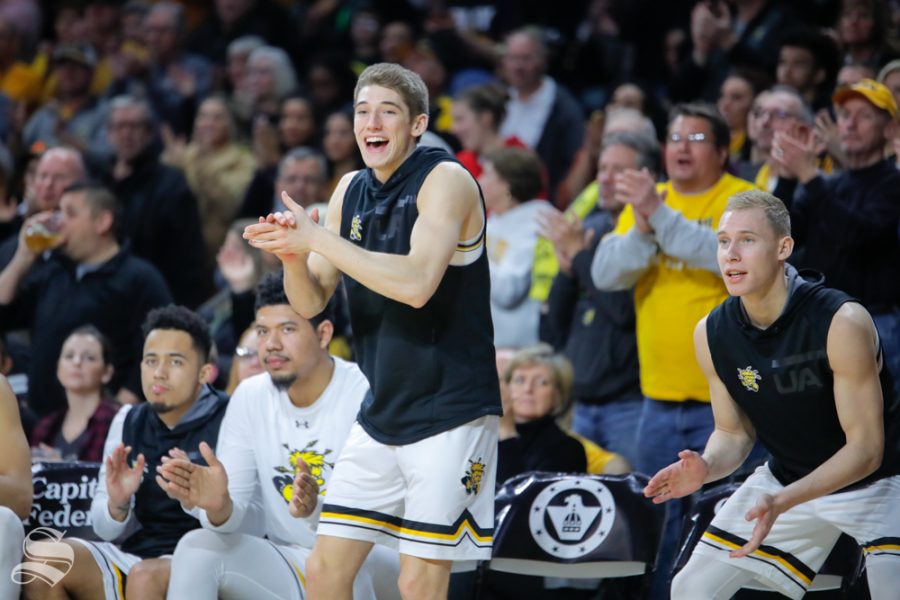 Wichita State guard Jacob Herrs celebrates from the bench in the second half of the game against UConn on Feb. 28, 2019 at Charles Koch Arena. (Photo by Joseph Barringhaus/The Sunflower.)

Wichita State is in sole possession of sixth place in the American Athletic Conference standings with a week of action left. The Shockers won seven of its last nine games to get to this point, and if they hold on, they’ll be the first team in the league with a 1-6 conference start to finish better than eighth.

Where did that come from?

“This was my own doing,” Wichita State coach Gregg Marshall said.

Few remember Marshall’s second season with the Shockers. Wichita State lost its first six games in the Missouri Valley Conference. The team finished with an 8-10 record and played in the College Basketball Invitational.

“The guys are playing a little better,” Marshall said. “There’s a lot of factors at play.”

Wichita State is busy competing for seeding in the American Athletic Conference tournament.

The Shockers are out of contention for one of the top spots in the conference, but coach Gregg Marshall wants the team to finish in sixth place. That’ll give Wichita State its best shot at moving through to the semi-finals of the conference tournament, Marshall said. Sure, Wichita State could lose in the first round, or it could finish in the finals. How good of a chance the team has is dependent on how the next two games — against East Carolina and at Tulane, teams Wichita State has already defeated — play out.

UConn beat South Florida on Sunday. That put Wichita State in sole possession of sixth place. If Wichita State wins one of its two remaining games, it can finish no worse than seventh. The Shockers can climb no spots in the conference standings. Sixth place in the conference tournament is important because that likely means a first-round meeting with East Carolina. Seventh place could mean either UConn or Southern Methodist in the first round.

The winner of the six-seed versus 10-seed game plays the team that finishes third, and that team is currently Central Florida. The American Athletic Conference tournament begins March 14 in Memphis.