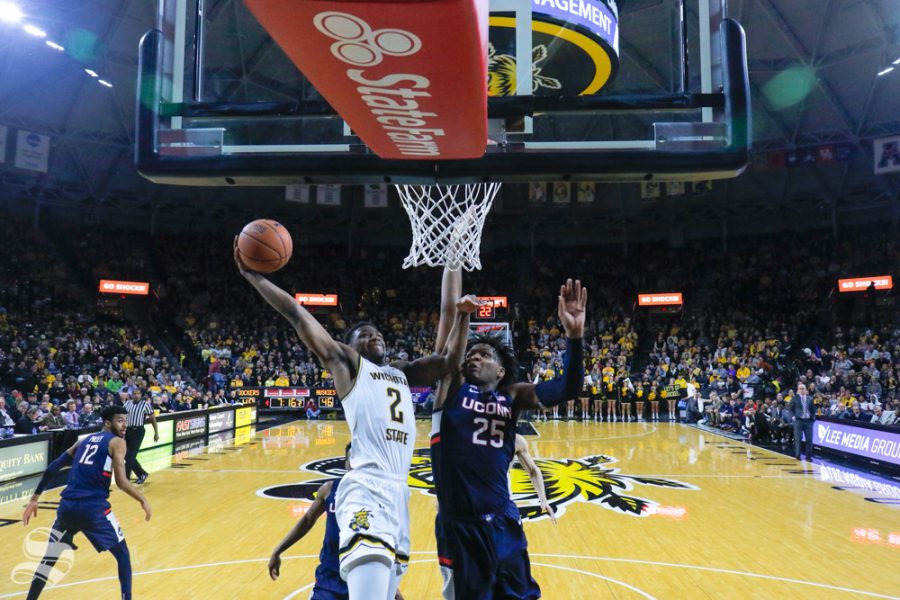 Wichita State guard Jamarius Burton goes up for a dunk in the second half of the game against UConn on Feb. 28, 2019 at Charles Koch Arena. (Photo by Joseph Barringhaus/The Sunflower.)

The Shockers are the first team in the league’s existence to finish better than eighth after a 1-6 start to conference play. Wichita State has had to win eight of its last 10 games to enter this position.

Of course, there’s still one game left to play. Wichita State (16-13, 9-8) will finish its season at Tulane, who remains without a conference win (4-24, 0-16) on Saturday. Should Memphis, who hosts Tulsa, lose and Wichita State win this weekend, the two teams would tie in the conference standings. Although Memphis, having swept its series with Wichita State, will own the tie-breaker and finish fifth.

That means when Wichita State travels to Memphis for the American Athletic Conference Tournament, they’ll draw the six seed in the conference tournament and play East Carolina (10-19, 3-14) in the opening round of the tournament. The Shockers fought off bad offense in the first half, but handedly defeated East Carolina on Tuesday. Wichita State swept the Pirates in the regular season series.

South Florida could, technically, slide into sixth if a couple of things happen. First, Wichita State has to lose at Tulane. South Florida would then have to win out versus Tulane and Southern Methodist. If all that were to happen, Wichita State would fall to seventh because South Florida owns the tie-breaker, having won the team’s only meeting.

If it wins Saturday at Tulane, Wichita State will play in the American Athletic Conference Tournament at 9 p.m. (CT) on Thursday, March 14.

The winner of that game will play the No. 3 seed in the quarterfinals the following day. That team will either be Central Florida or Temple, but could also be Houston or Cincinnati.

Central Florida hosts Cincinnati on Thursday before traveling to Temple on Saturday. Should Central Florida win one game, the team will likely take the No. 3 seed. That is assuming Cincinnati and Houston each win at least one of their two remaining games.

Wichita State coach Gregg Marshall has admired how his seniors, Markis McDuffie and Samajae Haynes-Jones, have handled a tough year — one of transition for the program.

Wichita State has a chance — be it not a convincing one — but a chance to win the conference tournament. The team is on the upswing, having won eight of its last 10 games. The Shockers have only won the conference twice since Gregg Marshall has been the coach — and none of those were in the American Athletic Conference.

The American Athletic Conference Tournament will be played March 14-17 at the FedexForum in Memphis.