‘Where do we go from here?’: Shock the Future conversation circle addresses referendum outcome 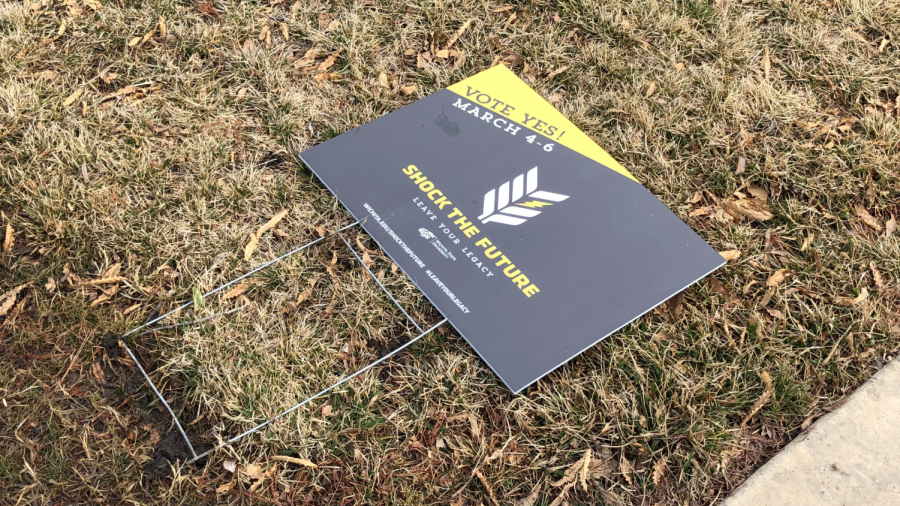 A Shock the Future referendum sign lies on the ground a day after students narrowly voted down a proposal to raise their own student fees by $6 a credit hour to support campus infrastructure projects.

Four students and a handful of Wichita State officials and community members turned out Thursday for a Shock the Future conversation circle the day after students narrowly voted down a proposal to raise fees by $6 a credit hour to support campus facilities upgrades.

Associate Vice President for Student Affairs Aaron Austin said the university will have to reevaluate and determine what comes next for all projects, including the new business school.

“As far as the million-dollar question of kind of, ‘Where do we go from here?’ —  that’s going to all be evaluated,” Austin said.

Director of Student Involvement Nancy Loosle said the program used to tally votes did not collect data on what percentage of students in each college voted for and against the referendum. Loosle did, however, provide a breakdown of voter turnout by college.

Austin said the slim margin that decided the referendum shouldn’t be lost in the ultimate outcome of the vote.

“Half the students that voted voted in favor of raising their fees because they were able to see what were some potential benefits, so I think that’s an important thing,” Austin said.

“Yeah, it didn’t pass, but I think the voice is also there that says there were a lot of students that were able to recognize that this did have a benefit to them.”

Graduate student Jake Ellis questioned the notion that students voted down the infrastructure proposal simply because they didn’t recognize its benefits.

“It seems like you guys are assuming that it was a failure to grasp how it would benefit the students that led to the rejection, when it could have just been that they fully grasped how it would not help them,” Ellis said.

“I think there were probably multiple good reasons,” Loosle responded.

If the referendum had passed, $20 million of the $38.6 million raised by the fee hike would have gone towards the construction of a new business building on Innovation Campus. The remaining $18.6 million would have been split between other colleges’ priorities and university-wide projects.

Officials say deans settled on infrastructure priorities after weighing feedback from students, faculty, and staff. No hard data on student input was provided before the vote.

Austin said the process for setting priorities was a gradual one.

“If you’re a freshman or sophomore or even a junior, they may not have necessarily been the concerns that you individually had, and maybe no one came directly to you this time, but it’s things that previous students have brought forward.”

He said that, if current students were asked to set their own infrastructure priorities now, they would likely graduate by the time feedback was processed and put to a vote.

“Then, there’d be students who say, ‘You didn’t ask me.’ Well, but we did ask students. It just may not have been you,” Austin said.

One student raised concerns that certain programs could lose accreditation if renovations to the play therapy center and psychology clinical labs are not completed. The renovations would cost $600,000.

“Dr. Muma and the deans are very aware of that, and that’s obviously why they put it forward as one of the projects that needed to happen,” Loosle said. “This is very fresh, and they’ve got to figure out how they’re going to move forward. We don’t want a program to lose accreditation, so how are we going to find the funding to pay for it now?”

Austin said officials understand that certain priorities must be addressed more urgently than others. He said WSU will likely put forth a new plan of action in the near future.

“I would be shocked if we don’t hear something this semester,” Austin said.

Sierra Brown, a Barton School of Business dean’s ambassador, said business students will be anxious to hear what comes next.

“I just don’t kind of know where we can go from here,” Brown said. “I do understand that there was an alternative plan B on it, which is kind of hefty as well.”

Officials said in the lead-up to the vote that business students would likely have to vote on a $30-$35 per credit hour program-specific fee hike to pay for the rest of the new business building if the referendum failed.

“That was something that was put out as a possibility, and as Aaron (Austin) said, they’re looking at options,” Loosle said of a potential second vote.

Brown said that while visiting classes to raise support for Shock the Future, Business Dean Anand Desai told students a program-specific fee would be less than ideal.

“When he talked about it, he would say like, he thinks that that’s an absurd amount we have to pay, so we kind of just left it at this is going to pass on the first referendum,” Brown said.

“We just didn’t really carry on with that conversation because there was a lot of confidence that it was going to pass like no matter what.”

The Sunflower asked Austin if building a $30 million building would be an option.

“We’re just not in a position to be able to give a real solid answer on what’s next,” Austin said. “It will, in some ways, kind of go back to the drawing board.”