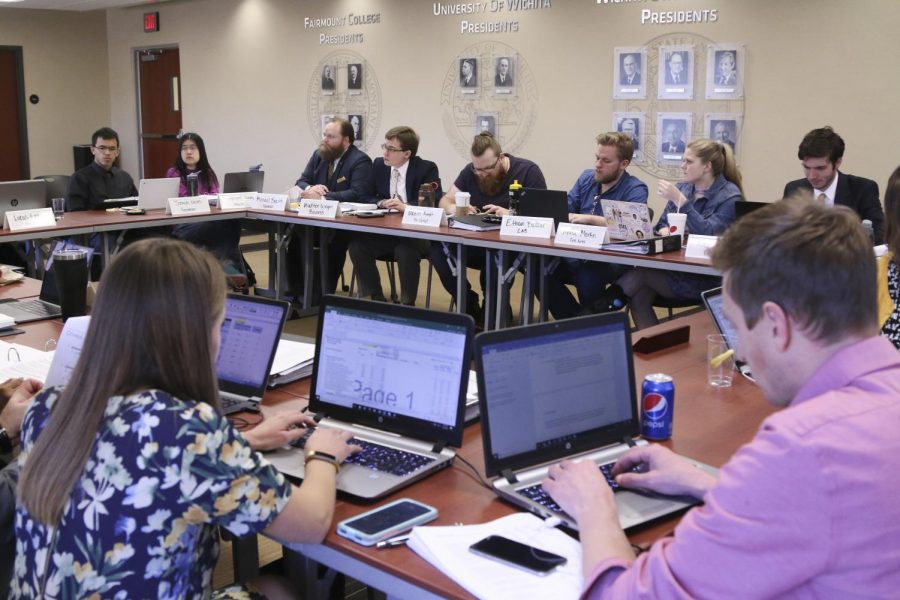 Members of the Student Fee Committee meet for deliberations on Monday, Mar. 18, 2019.

The committee settled on a 2.5 percent increase to Wichita State’s student fees budget. With that increase, the committee — which has twice the student representation it did last year — was able to provide nearly full funding to all organizations’ requests.

For a full-time student taking nine credit hours, student fees will go up $9.92 per semester with the current fee proposal, Vice President of Student Affairs Teri Hall said Tuesday morning over the phone.

Student organizations such as the Mikrokosmos literary journal, the Baja Team SAE, and The Sunflower — all organizations that have struggled to receive their requested funding in the past — were able to get full or nearly-full funding.

“The big winner was The Sunflower,” Hall said. “For the two years prior, Sunflower funding was very contentious during that process, and it wasn’t yesterday.”

When asked her perspective on why the committee made such a change from last year’s Sunflower allocation, which saw an initial recommendation that the paper’s budget be cut in half, Hall said, “I’m not going to go down that hole,” but “there was support in that room for what The Sunflower does and is, and I think that showed in the vote.”

Dan Arndt, an at-large committee member, vouched for The Sunflower before the vote on the allocation.

“[The Sunflower] has had to cut to the bone, but they still can fill 8 pages,” Arndt said in the meeting. “They deserve full funding.” Arndt is an editor of the Mikrokosmos literary journal, which received its full funding request.

Most of the cuts made to balance the budget came from Student Affairs, which oversees a variety of areas on campus.

That led Hall to interject: “With all due respect, I don’t think it’s this committee’s job to recommend cutting a position.”

From that point on, the committee debated allocations based on overall line items, instead of going into specifics, such as new positions.

The voting portion of the committee, comprised of 14 students, was largely contention-free throughout the 4-hour meeting.

“I think everyone there knew the seriousness of what we were meeting to do, and an air of sobriety was certainly present throughout deliberations,” LAS committee member Ethan Balzer said in an email Tuesday, speaking on his own behalf, not the committee’s. “There may have been brief stints of sidebar conversations or messing around, but overall it didn’t detract from the experience, and we were always able to get back on track.”

Balzer said SGA President Shelby Rowell “helped work to ensure that any of our practices affected everyone equally, staying continuous with our decisions.”

“I believe we came to a conclusion that every organization can be satisfied with . . . We might not have been able to fully fund everyone’s budget increase requests, but we were still able to hit close to those marks,” Balzer said.

Balzer said he was happy with how the meeting went, given its seriousness, and said the overall sentiment was that the meeting was a success.

“We ensured to keep programs that go directly back to serving students — such as scholarship programs, applied learning opportunities, and other outlets — at at least their full budget, with a few substantial increases,” Balzer said. “There was nothing in the meeting that spoke out to me as particularly controversial to the student body, but I’ll still be keeping my ear to the ground to see what LAS students have to say about it all.”

The student fees budget will be presented for a first read at Wednesday’s SGA meeting. It will be voted on by SGA next week.

This story will be updated with perspective from additional committee members as interviews become available, as well as perspective from the SGA cabinet, represented by SGA Treasurer Stella Yang.