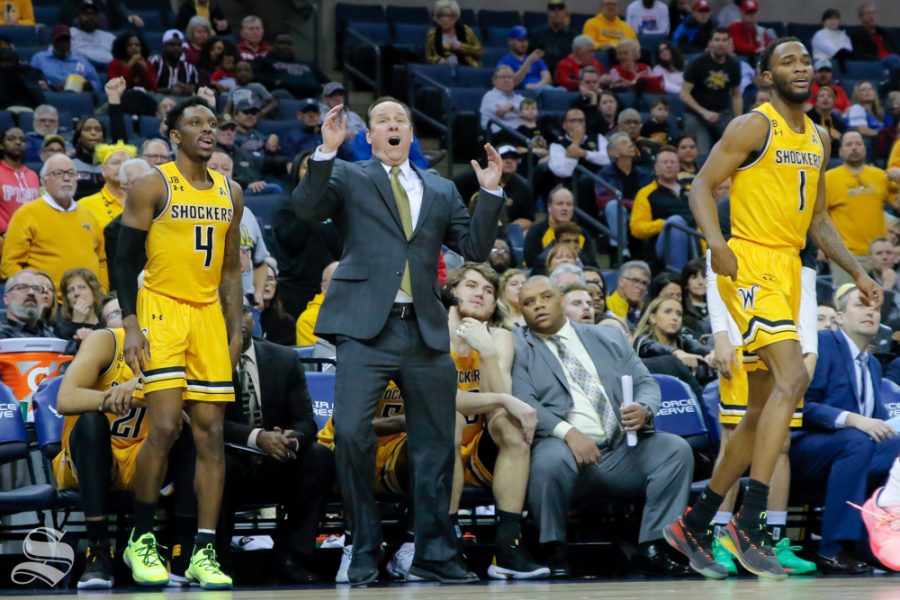 Coach Gregg Marshall and the Shocker bench wait for a shot to drop during the second half of the game against Temple on March 15, 2019 at the FedExForum in Memphis, Tennessee. (Photo by Joseph Barringhaus/The Sunflower).

His team was wildly inexperienced. Ten players had never played a Division I basketball game. So he thought about goals. He wanted something that was challenging, but still possible. He laid out a plan for the team to win 20 games and make the National Invitation Tournament.

Then Louisiana Tech exposed the Shockers in the team’s home-opener. Oklahoma delivered Wichita State its worst loss in Marshall’s tenure. The team dropped to 1-6 in conference play. Marshall struggled to find positives. He thought the goal was lost.

“It’s not that these guys aren’t talented,” Marshall said of his expectations for team. “We didn’t have experience. We looked like it. We played like it. We looked as bad as any basketball team I’ve seen.”

That’s when the Shockers surged, won 11 of 13 games, played in the semifinals of the American Athletic Conference tournament and secured a bid to the NIT.

Unexpectedly, Marshall was in a position to reach a milestone of 500 career wins against Furman in the opening round of the tournament. He won his third career game against the Paladins in 1998, and 21 seasons later, he’s now collected 500.

The Shockers won Wednesday in Greensville, South Carolina, to advance to the second round of the NIT. They’ll next travel to Clemson on Sunday. Game time is undecided.

“To have 500 wins, 21 years … So many positive and favorable things have happened,” Marshall said. “I’ve been very blessed to be in the right place at the right time.

Wichita State fought off streaky shooting from the Paladins and its scoring threat in 6-8 forward Matt Rafferty, who scored a game-high 27 points. Rafferty was 7-8 from the field in the second half.

“They don’t pass the eye test,” freshman Erik Stevenson said of the Paladins, “but they pass the basketball test.”

Wichita State held onto a six-point lead in the final minute of the game before it won 76-70.