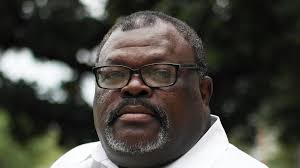 Lt. Colonel Larry Burks inherited a crisis when he took over as director of Wichita State’s Military and Veteran Student Center last October. More than 100 student veterans weren’t receiving their GI Bill benefits due to understaffing and a backlog of paperwork.

“The biggest priority that I know I had to deal with from the very outset when I first got here was to fix the issue with the certification,” Burks said. “The people that were here before me really just dropped the ball on this entire process.”

Burks hired a full-time certifying official and went about righting the wrongs.

“We were able to kind of resurrect that entire system,” Burks said.

“It’s worked out beautifully. I think we’ve got a system down now where we can turn around certification within minutes.”

“It’s always a difficult time to get dropped into a hot mess — especially when it’s, ‘I’m new to the university myself, and now I have to clean up something that has happened,’” Bearth said.

The United States Department of Veteran Affairs has 30 days to process student veterans’ paperwork once it is provided by an institution. The VA recently cut overtime pay for workers, once again stagnating the benefits process.

Sam Jones is WSU’s lead certifying official. Jones said some student veterans haven’t been getting their monthly housing allowance on time. The money oftentimes comes in lump sums, which places financial stress on the student.

“If they didn’t get January and February, they’ll probably get it in March,” Jones said.

Burks said student veterans understand all too well that the VA system can’t always keep up with demand.

“When you work with the VA, there’s going to be times when there’s a lag in those monies, so they come here, they plan accordingly,” Burks said.

He said student veterans have paid it forward through their service and deserve a college education without constantly worrying about a source of income.

Burks said he learned a great deal about leadership in the military.

“Good leaders are folks that take care of the people that work for them,” Burks said.

“I’m responsible for the welfare and the wellbeing of every student veteran that comes into this building, is enrolled in this university.”

Bearth said Burks is a strong advocate for students at the Military and Veteran Student Center.

“I have the utmost confidence in him,” Bearth said. “He is always willing to help us out.”

Burks said he’s trying to network with organizations and businesses outside of WSU so that graduating vets can have easier access to internships and job opportunities straight out of college.

“They have the right to be able to get good jobs out there as long as they do the schoolwork that’s here to get them their degrees,” Burks said.

“They deserve to have a second chance in life.”

In addition to his role as director, Burks is also president of the Wichita branch of the NAACP.

“This is my profession — this is my job,” Burks said of the Military and Veteran Student Center. “The work that I do with the NAACP is something that I do on an as I’m available basis.”

Burks said he has three vice presidents and an entire staff at the NAACP that keeps operations running smoothly in his absence.

“The organization and all the things they do doesn’t miss a beat,” Burks said.

Burks was hired on at WSU not long after an intoxicated student with a firearm was apprehended by the WSU Police Department in the Military and Veteran Student Center. Nobody was injured, and the student was taken to the hospital for an evaluation and released.

Burks said the matter was resolved before he took over, but that the center has taken internal measures to prevent such an incident from occurring again.

“I don’t think that’s going to ever be the case again. That’s going to be one of those things that should never happen here again,” Burks said.

He said he wants the center, located in Grace Wilkie Hall, to be a welcoming place for active-duty students, veterans, and dependents. On top of valuable resources, the center provides a lounge, coffee, computers, a high-speed copier, and study rooms.

Burks encouraged non-veterans to come by Grace Wilkie, too.

“Even those that are not veterans, I want them to come — whoever they are, what they’re doing — come and see us here,” Burks said. “Because we are an integral part of Wichita State University.”