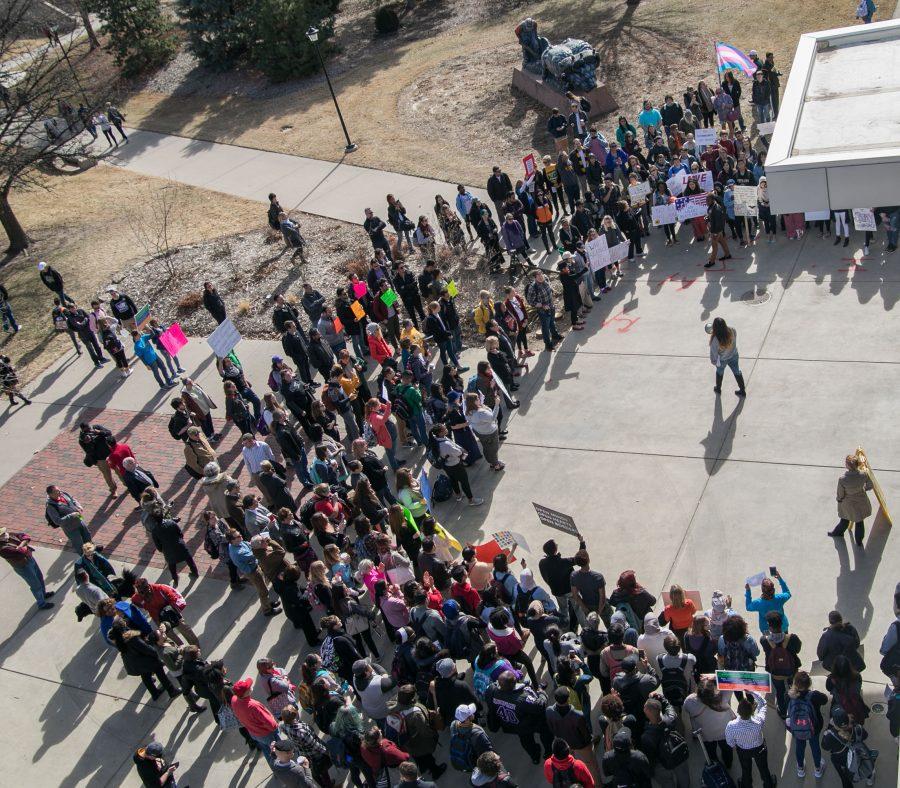 A crowd gathers outside the Rhatigan Student Center for the "No Ban, No Wall" peace rally in November 2016.

President Donald Trump signed an executive order Thursday that would withhold federal grant money from colleges that fail to promote free speech and follow federal rules guiding free expression. Wichita State officials say the university is committed to free speech and will not be affected by the order.

Public universities are already required to uphold the First Amendment, but the executive order comes as a response to conservatives who feel their views have been suppressed on college campuses.

“Today, we are delivering a clear message to the professors and power structures trying to suppress dissent and keep young Americans . . . from challenging far-left ideology,” Trump said during Thursday’s signing ceremony at the White House.

“Under the guise of speech codes, safe spaces, and trigger warnings, these universities have tried to restrict free thought, impose total conformity, and shut down the voices of great young Americans,” Trump said.

“Such lack of definition could lead to administrative standards being developed or arbitrarily implemented which chill free speech or inquiry, or which might be used to advance specific political agendas,” the Student Press Law Center wrote in a press release.

“WSU has a long-standing strong commitment to First Amendment rights and will always protect the freedom of speech as guaranteed by the U.S. Constitution and decisions of U.S. courts,” Kleinsasser wrote in an email.

“We believe WSU is in compliance with the latest executive order and the free speech standards.”

The Foundation for Individual Rights in Education (FIRE) is a group that advocates for free speech on college campuses around the country. FIRE uses a three-tiered rating system to gauge universities’ policies on free speech.

Events must be registered with the Office of University Event Services at least 72 hours in advance. Hall said registering in advance helps the university understand where events should be held, how many people will attend, and whether or not amplification devices will be used.

Hall said the university has the power to shut down “First Amendment activities” that are outside of the guidelines, but that doing so is not standard practice.

WSU’s chapter of Young Americans for Liberty (YAL) has protested free speech zones by passing beach balls around campus and writing on them with markers. During their first demonstration in 2017, the WSU Police intervened — checking a beach ball for hate speech, according to then-chapter President Maria Church.

FIRE has condemned WSU in the past on several occasions. In April 2017, the free speech group wrote a letter petitioning the university to overturn the Student Senate’s initial decision not to recognize YAL as a registered student organization. In September 2017, FIRE wrote another letter calling on WSU to drop an investigation into Phi Delta Theta fraternity after members hung a banner reading “New Members Free House Tours!” outside their window during sorority recruitment.