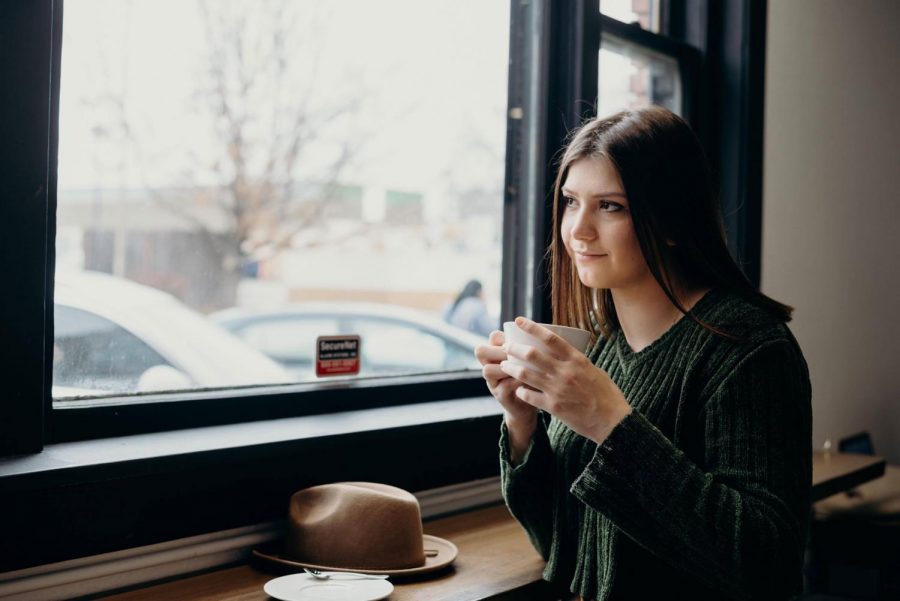 A teardrop splashed against the Koch Arena basketball court. There she stood: Hannah Foster, beaming, crying, and feeling more emotions than she could process. The crowd of fans, many of whom were familiar with her story, was cheering not with her, but for her.

The senior cheerleader had just been announced at the last men’s home basketball game of the season. It would be the last time she would ever cheer.

With every clap, her heartbeat sped up.

“Is this what gratitude normally feels like?” Foster wondered to herself. Just eleven months before, she didn’t know if she would ever cheer again. She wasn’t even sure if she would be able to walk.

Late one night in the spring of 2018, a driver who was texting swerved into the left lane at Foster. She veered her car into the concrete median at 65 miles per hour.

Her headlights broke, and after stepping out of the car to get help, a second car crashed into Foster’s already-totaled vehicle. The second impact hurt Foster even more. Then an ambulance arrived.

By the early morning, her throat was hoarse from hours of screaming and crying in Wesley Hospital. The accident shattered Foster’s femur and almost ended her life.

The tallest member of the cheer team, Foster stands six-foot-two. If she had been a couple inches shorter, her pelvis or spine would have been crushed by her car during the accident, paralyzing her at the age of 19.

“I took a lot of things for granted,” Foster said. “I was going through life as a kid. I didn’t think about consequences. I didn’t realize how temporary everything is.”

But nothing was going to interrupt Foster’s vision — cheer, work, study, repeat. No interruptions or distractions were going to throw her off course. She was determined to graduate with a graphic design degree a year early despite the accident.

“I went through this serious depression,” Foster said, describing the difficult healing process she underwent after the accident. “Why didn’t I die? What was the reasoning? What am I supposed to learn from this? I have to understand why this happened.”

Foster’s summer was characterized by daily use of a wheelchair, walker, and cane. For months, she spent most of her time trying to heal from surgery and attending physical therapy. After dozens of appointments, doctors determined her femur was not healing and ordered a second surgery. After months of devoting all her energy to recovery, Foster had to start the entire process from square one. But Foster looks back on the event with a remarkable attitude of acceptance.

“I do think it was supposed to happen. It took a long time to swallow that pill,” Foster said. “I’m really thankful for it. I’m really lucky. I don’t think I recognized the strength that I had to push forward.”

For the first 19 years of her life, cheerleading was the only thing Foster valued besides her academics, she said. When that was taken away from her, she was forced to reevaluate. Through it all, she remained positive.

“There’s so many people I’ve met because of it,” Foster said. “I have all these great people supporting me, and none of that would have happened if it weren’t for my wreck.”

Since her accident, Foster joined a sorority, gained a new graphic design internship, and is still set to graduate a year early. She gained patience, fresh perspective, and most importantly, new relationships that she can’t imagine her life without. She was able to return to cheerleading in November, just in time for basketball season.

“Bad things in our lives have to happen to introduce us to these good things,” Foster said. “All the puzzle pieces make sense now.”